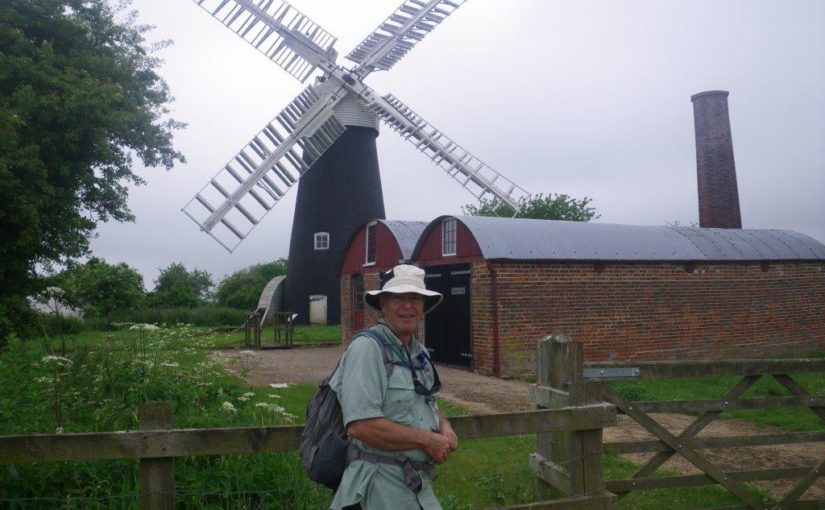 We decided to spend a day in the countryside for a change today, and took a train to Reedham on the Wherryman’s Way. We would have gone back to Surlingham to continue where we stopped last week, but it is a bank holiday here in England and the normal bus service is not running.

From Reedham station we walked about a kilometer down the road to the ferry across the Yare River. This is the only crossing between Norwich and Yarmouth, and there has been a ferry here since the 17th Century. The river here is fairly narrow, so the ferry is held in place by a chain on either side. Until the 1950s it had to be winched across by hand.

As we were heading north-east we didn’t cross the river, instead walking along the stopbank towards the town. After just a few meters we came to a sign informing us that the path was closed and that we would have to walk all the way back to the station and along the road to get to Reedham. The notice would have been a lot more use back where people get off the train!

The first thing we saw when we reached the village was a derelict looking bridge at the side of and running parallel to the river. I noticed a lighted sign saying “bridge open”, and realised it could swing around to allow traffic to cross. It seemed odd that the ferry could stay in business right next to a bridge, but the mystery was solved as we were leaving town when we saw it carried two rail tracks. While we were watching, it started to swing around, and after a few minutes a single rail-car appeared.

It wasn’t long before we came to the end of the road, and the path led back up onto the stop bank, and out into open country. It was past lunchtime by now, so we were glad to see a seat where we could eat our sandwiches. It was a memorial to someone named Mike, and had an amusing little poem on a plaque.

From there the path was not particularly interesting for quite a while, because the land all around was completely flat, with the only trees being quite distant. Because the river is higher than the surrounding countryside, we kept seeing pleasure boats cruising past above us unless we were at the top of the bank.

The whole area was once a huge swamp, mostly underwater except for during the driest summers. From 1698 attempts were made to improve navigation for shipping, but it was not until the early 19th century that new channels were cut and windmills installed to pump water out of drains and up into the river.

We checked out several windmills in various states of repair. We could see that the nearby Dutch had been influential in the designs. Nowadays there are huge electric pumps which turn on automatically when the water level gets high.

After walking about 16 kilometers we arrived at Berney Arms, where we planned to catch a train home. We saw a sign informing us that the station was 600 yards away, but it wasn’t clear which direction, and there was no sign of any building or railway. When we had travelled about a kilometer we realised we must be going the wrong way, so we retraced our steps back to the Berney Arms Mill, which is the only building in sight apart from a farmhouse. On the way we saw a train race past, and we realised we had missed it.

I wasn’t too worried at this point, because Felicity had checked the timetable and seen there are trains about ever half an hour running from Yarmouth back to Norwich. We finally found the station, which consisted of a couple of signs and a single narrow platform, way out in the middle of the marsh. There is no public road access, so the only way out is by train, boat or on foot.

When I checked the timetable, I discovered that the station is on a remote branch line, and that there are only three trains each day which stop on demand. Apparently when Mr Berney originally sold land to the railway company he included a condition that a station was built to serve the “settlement” in perpetuity.

There was one more train due, but not for over two hours. The weather had tuned a bit chilly and it looked like it might rain so we didn’t fancy sitting out in the open for such a long time. This left us no alternative except to walk the remaining 8 km to Great Yarmouth where we knew there would be plenty of trains.

Almost exactly two hours later we arrived at the Yarmouth station to find our train at the platform about to depart. The return trip to Berney Arms took less than 10 minutes, but we were glad we hadn’t spent the time waiting in the cold.

Altogether we must have walked over 26 km today.