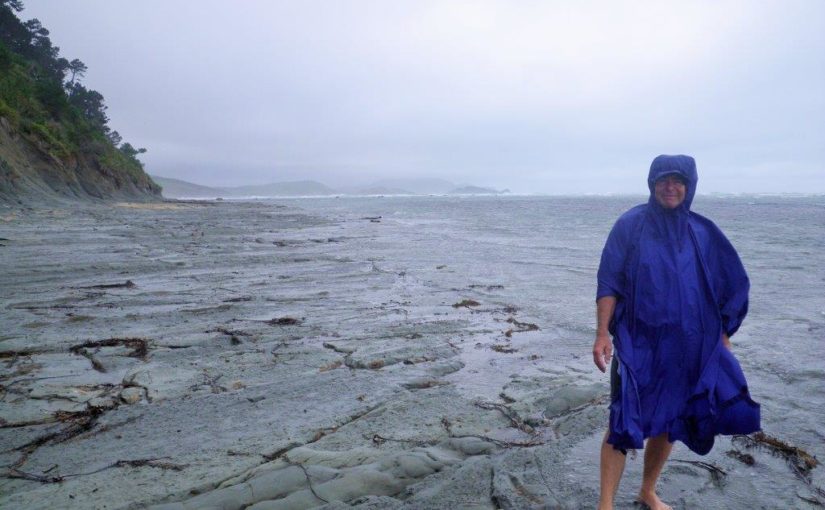 With the weather looking pretty dreadful everywhere in the North Island, we decided to backtrack south after our friends returned home to Auckland. We are hoping that East Cape will be the first area of the country to get sunshine after the “weather bomb” finally passes over.


When we were stopped by roadworkers at the bridge over the Tarewarewa Stream, we reversed for a hundred meters and drove down a dirt track to check out the Pouawa Beach Marine Reserve. Although it was windy, the rain had eased so we went for a long walk up and down the beach. The reef might have been an interesting place to snorkel if it had been fine, but the crashing surf and turbulent water wasn’t at all attractive. It was almost 2.00pm by the time we got back to the motorhome for lunch.

We stopped in Gisborne to stock up on groceries and diesel, then continued south.

The Mahia Peninsula is almost an island, but a low spit of sand provides enough width for a road. On the northern side there is a free camping area at Oraka Reserve on the edge of the estuary. After coffee, we went for a stroll along the river, but the tide was in and we couldn’t get very far. We could see the beach in the distance with a line of huge surf.

In the morning it was raining steadily, so we sat around doing a bit of work and reading while we had internet available. About midday I noticed that the sky was clearing, so we decided to explore the Mahia Peninsular Scenic Reserve. This involved a long drive because Google shows the road it is on running from one side of the peninsular to the other. Unfortunately the northern end turned out to be a “paper road”, and there was no sign of it on the ground, which meant we had to drive all the way back to where we started and head up the southern end instead.

It was worth the effort, because the reserve is one of the best examples of coastal forest in this part of the country. There is a 3km loop track leading down into a valley, along a stream then back up a hill to a lookout high above the road where we had parked. The stream had almost a dozen unbridged crossings, but I managed them all without getting water inside my boots.

There were lots of huge nikau, as well as tawa, rimu and lancewoods. There is also heaps of rata, often with metal bands around the base to keep the possums off. The highlight though was a big patch of kohekohe draped with supplejack vines, which looked quite tropical. We saw dozens of wild goats on the road, but the fence around the reserve must have been working to keep them outside.

DOC (or local volunteers) are obviously doing a good job with predator control, because there were heaps of birds. We heard lots of cooing sounds a bit like a dove, which turned out to be kereru high up in the canopy. At the lookout near the end, a couple of bell-birds serenaded us to compensate for the lack of view due to low cloud.

I didn’t wear my poncho, even though it did drizzle a bit. It was so humid that I think I would have got just as wet from sweating, so there didn’t seem like much point.

For the next night, we parked at Opoutama Beach on the southern side of Mahia, just past where the disused Napier to Gisborne railway runs along the coast of the mainland. This would make a fantastic cycleway if they ever decide to rip up the tracks. The sea on this sheltered side of the peninsular was almost completely flat and calm, and we enjoyed a swim in the warm water. Afterwards we rinsed off the salt in a river which was several degrees colder.