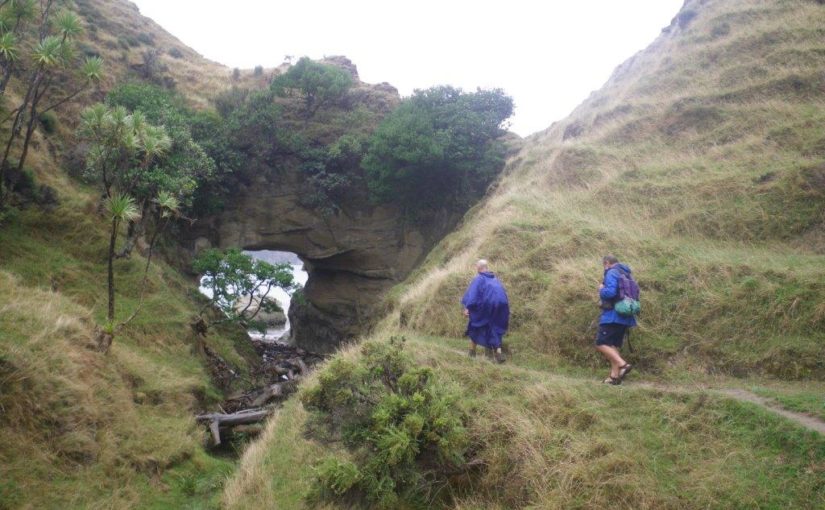 Our friends John and Claude sent us a text to say they were camping at Tolaga Bay for a few days on their way back to Auckland, so we decided to join them. The woman at the campground warned us that a storm was on its way and that they were expecting gale force winds, but we had to stay somewhere so we booked in anyway.


In the afternoon there was hardly a cloud in the sky, and the sea was calm with very clear, clean water which would have been great for snorkeling. We had a swim and unpacked our new deck chairs to eat dinner in the tent, which was a lot more like camping than being in the motorhome.

The rain started soon after we went to bed, and continued steadily until the middle of next morning. There wasn’t much wind though, because the full force of the storm was hitting Coromandel, much further to the north.

We didn’t want to sit around doing nothing all day, so we put on our coats and walked over to Cook’s Cove, where Captain Cook first landed in New Zealand back in 1769. The famous hole in the wall, which is an opening from a sheltered valley to the exposed coast, made a great place for a photo opportunity.

Three of us set off up the hill on a side track to see a monument, but we walked right past it and were almost a kilometer away before we realised we had gone too far and turned back. There were great views from so high up, so we didn’t think the extra walk was wasted. The actual monument turned out to be a block of concrete with a small metal plaque telling us what we already knew about Cook’s landing.

The temperature had dropped quite a bit over the day, so we were glad to be able to turn on our heater and dry out our wet gear. We decided that it would be a lot more pleasant eating dinner in a warm space, so we packed ourselves around the table of the motorhome and enjoyed another pleasant evening.

This morning we all went for a walk down the beach to the mouth of the Uawa River, where we discovered a dead horse that had presumably been washed down in a recent flood. It didn’t smell so we figured it hadn’t been there for long. Somehow the horse’s head had become trapped under a huge log, which was rather puzzling because the river wasn’t particularly high.

As we rounded the corner of the estuary, we spotted a pair of oystercatchers, one of which was completely white, which we have never seen before. The sand turned to mud, with thousands of small crabs which ran towards our bare toes menacingly instead of heading for the safety of their holes.

One can’t visit Tolaga Bay without walking out to the end of the massive 660 meter wharf which was built in the 1920s to allow the export of meat and wool. Although this had been a huge expense for the small community, the wharf was only busy for thirty years before the road to Gisborne made it uneconomic. The last ship called in 1966.

By the end of the century the structure was in pretty bad shape, but it had become such a tourist attraction that over five million dollars was spent on repairing it to make it safe again.

By now the sea was pretty wild, with piles of white foam washing up onto the beach, but I decided to go for a swim anyway, knowing that I could jump into the camp’s warm shower to recover. It looks like there is a lot more bad weather on it’s way, so we are debating whether to continue around East Cape or head south west in the hope that other parts of the country will be more benign.