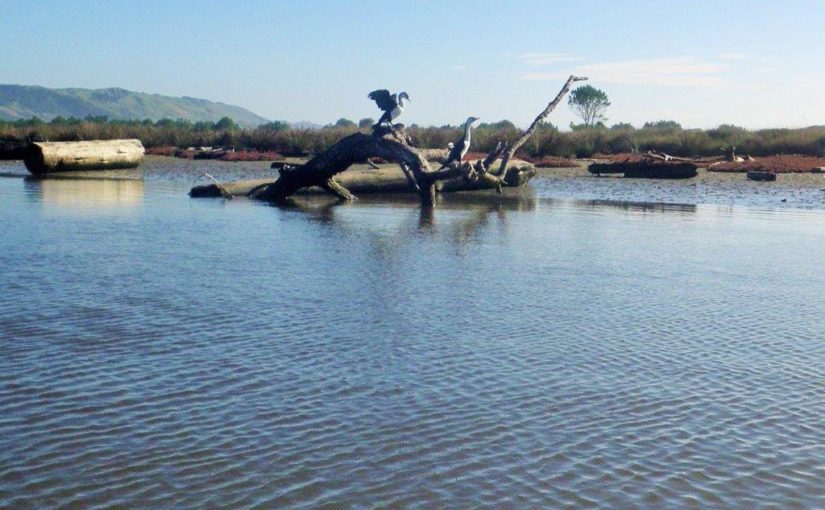 When we first woke this morning, the sky was quite clear with an pink-orange glow. I was still drinking my bed tea when out to sea the sun popped over the horizon and shone straight in our bedroom window. It was obvious to both of us that it was going to be a kayaking day.


Although the sea was still fairly calm, a little bit of surf had sprung up overnight. We have launched through bigger waves in the past, but it would have been slightly challenging with an audience of half a dozen campervans sharing our beach. In any event, the coast is nearly all grey rock cliffs which aren’t very scenic to paddle past, so we packed up and headed back to our previous camp on the edge of the estuary.

The tide was going out, so we passed the entrance to the shallow Mangawhio Lagoon and continued up the Kopuawhara Stream. This far south there are no mangroves, but the banks were lined with hundreds of silver maples, presumably planted to stabilise the banks.

We encountered a range of farm animals which all found us entertaining, three horses first, the cows, sheep and a huge pig wallowing in the mud. As you would expect there were also lots of water birds that we surprised each time we rounded a corner.

After a couple of hours we came to a bridge which seemed like a good place to turn around. There was quite a strong current, which combined with the outgoing tide meant that the return trip down-river was a lot faster and less effort.

We landed on the opposite side of the river to the motorhome, and walked over the sandhills to see the ocean beach. While I was putting the gear away, Felicity joined some locals collecting pipis, and got enough to make delicious fritters for dinner tonight.

We drove south almost to Nuhaka, then up into the hills to explore the Mangaone Caves.

As we crossed farmland to the DOC reserve, we noticed that the limestone rocks all around us had fossilised scallop shells, proving that the land was once under the sea. The caves themselves were not particularly impressive, but it was worth the effort. There were two side passages, reached by climbing wooden ladders. At the end of the furtherest one, I was disappointed to see thousands of names written on the walls with felt pens.

The highlight of our visit was a muddy pool on the floor of the main passage which contained a frog. When either of us shone our light on its puddle it quickly swam to the deepest part and hid under some leaves.

On the way back down the hill, we were distracted for a while by a patch of ripe blackberries. I’ve now got a few scratches and a small hole in my shirtsleave, but it was worth it.

Just before the main road I noticed what must have been an old house site, with a big lemon tree laden with fruit. We collected a few for our fritters, then Felicity noticed a walnut tree and got a bag of them as well. There was even an apple tree, but I only picked a couple because we have a bag from the supermarket.

Our next stop was Morere Springs, where we booked into the campground. The manager told us that the hot springs across the road would be closing soon, and suggested we go straight there before finding a parking spot. The best pools are a 5 minute walk up a path through a beautiful grove of nikau palms. I was surprised to see a mature and healthy looking kauri, as this is a long way south of their natural range, but a notice near it informed us that it had been planted by an unknown person many years ago.

The hot pools were very hot, and a bit redundant on such a humid, warm evening. The bush surroundings are stunningly beautiful though. Luckily there was a cold plunge pool nearby to cool off in.