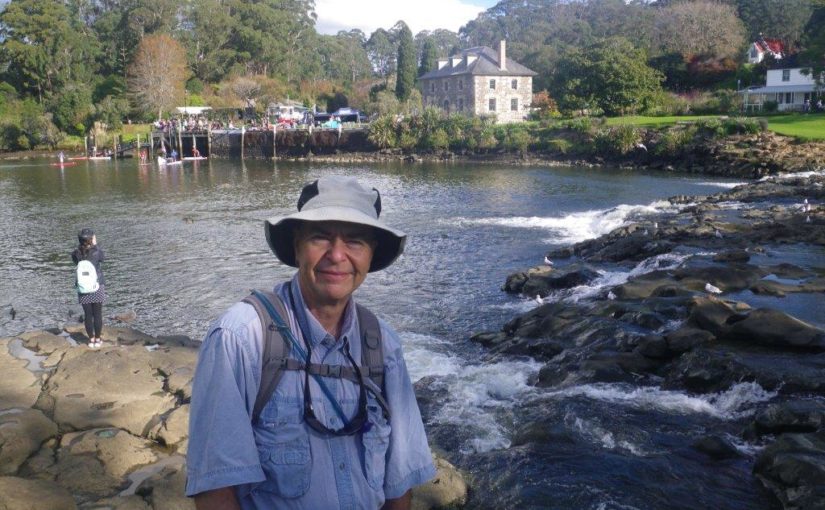 When we saw there was fine weather forecast for the long weekend, we decided to head north in the campervan. Realising that others would have the same idea, we hit the road about 3.30pm, and as a consequence got a pretty clear run to Whangarei.


In our rush to leave, we hadn’t packed much fresh food, so we planned to stay in town and visit the farmers’ market in the morning. Alas, by 6.30 the nine legitimate spaces in the town basin car park were taken, and we had to come up with a plan B.

This turned out to parking right on the coast in the car park opposite the Onerahi Yacht Club, just past the airport which fortunately is not frantically busy at night. It is a very fine spot, looking out at Rabbit, Limestone and Rat Islands, so we will probably use it again. The fine, clear weather came with a price – it was unbelievably cold in our unheated van. I had to sleep with my woolly hat on all night!

Our purchases at the Saturday morning market weren’t quite as successful as last time, because several of the stallholders we had patronised weren’t there. We looked for the tiny black Maori potatoes we both love, but the best we could find was a smallish variety that turned out to be black only because they were extremely dirty. These were perfectly edible, but not worth a premium price. We did manage to get another loaf of the delicious caraway-free rye bread.

After breakfast we continued driving north to the Bay of Islands, as I was keen to take a walk up the Kerikeri walkway to have a look at a product called Geoweb which the Dept of Conservation has trialled up there for use in track construction. We packed a picnic lunch and set off a bit before mid-day. At the attractive Rainbow Falls, we sat on a bench in the sun to eat our sandwiches, and tried to ignore the mist from the falling water that drifted our way from time to time. It wasn’t until we walked a bit further to the top of the falls that we could look back and see the rainbow ending near where we had been sitting.

Just over the fence from the public reserve we could see the Motor Caravan Association property, which is a triangle-shaped paddock with a lighthouse in the centre. It looked like a great place to stay, so we decided to return in the van for the night.

When we arrived back at the car-park at the start of the walkway on the other side of the river from the Stone Store, we noticed that the inaugural Harcourts stand-up paddle-board races were about to begin. There is an old Maori Pa site overlooking the Kerikeri basin, so we hiked up there and watched for a while. Some of the men had to paddle 6km, which would be no big deal in a kayak, but looked like quite an effort on the paddle-boards.

On Sunday morning we had a bit of a late start, but by about 11.30 we were unloading the kayaks at Opito Bay and preparing to launch. The sea was fairly calm so we headed out of the Kerikeri inlet and north into the Te Puna inlet. This section of the coast is mostly still clad in native bush, but every little beach has at least one very flash house, some with private jetties – multi-millionaire territory.

We landed just around the point at the far end of Crowles Bay, and found a sunny spot in the long grass to eat our lunch. We did consider a quick dip in the sea, but there were just a few too many clouds about to be sure we could stay warm while drying without towels.

I had noticed a menacing band of dark cloud to the south, but when we started paddling back I was happy to see it had moved inland and wasn’t going to affect us. The wind had picked up a bit, but it was still fairly easy paddling until we reached the end of the peninsula where the ocean swells bouncing off the headland were creating some medium-sized waves hitting us side-on. I tried to go wide enough to avoid the choppiest bit, but there were about a dozen yachts charging out of the Kerikeri inlet so we had to try and keep out of the main channel. Felicity was a bit outside her comfort zone for a few hundred metres. As soon as we rounded the corner we were back in sheltered water and could relax again, and I was able to get my camera out.

As Felicity has to leave home at 5.00am on Tuesday to fly to Canberra for a conference, we thought it would be good to avoid the holiday traffic by staying the night somewhere south of Whangarei and leaving before mid-day. We chose the DOC Uretiti Beach camp-ground just north of Waipu, which I haven’t been to for decades – before all the huge macrocarpa trees were cut down at the end of last century. It has since been re-planted with pohutukawa and other native species, and is now very attractive. We were a bit annoyed at having to purchase a compulsory $2 rubbish bag, despite the fact that we have a DOC Pass which is supposed to cover camp-ground fees, and that we were on our way home to where we have already paid for rubbish disposal.

There was a brief shower of rain overnight, but we awoke to a fine, if cloudy morning. Thankfully the cloud meant that both Saturday and Sunday nights were a comfortable temperature. Felicity took the sunrise behind the dunes photo out of the van window – but we were too sleepy/lazy to get up and walk to the top of the dune and see it over the sea.

We did go for a walk for about two and a half kilometres south along Uretiti Beach after breakfast. There were about a dozen washed-up bird wrecks most of which I suspect were fairy prions which breed on the Poor Knights Islands just north of here. After we turned around, we followed a narrow trail through the sand dunes back to the camp.

There was no congestion at all as we headed south in the van late morning. We stopped at Wairewa for an hour to have lunch in the van at the beach, and by mid-afternoon we were home and unpacked.

One thought on “Kerikeri for Queen’s Birthday”