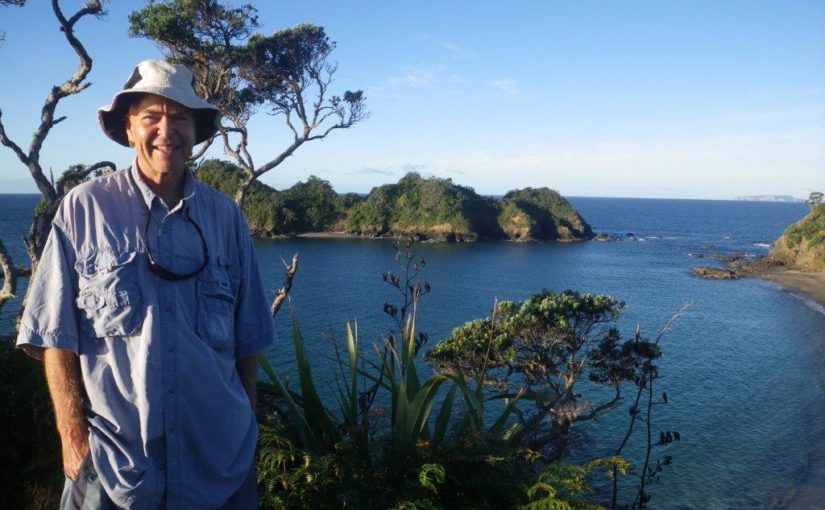 Our plan for Anzac weekend really only extended as far as visiting Felicity’s cousin for dinner and spending the night outside his house near Parua Bay, just north of Whangarei. We were only a couple of kilometres away when there was a terrible vibration and smashing noise from the rear of the campervan, so I pulled over to the side of the road just opposite the yacht club. All the rubber tread on one tyre had de-laminated and was lying on the road about 20 metres behind us, so it was obvious we were going to be a bit later than expected.


Although I was mostly off the road, and the damage was to the kerb-side wheel, I decided that since the tyre hadn’t actually deflated I would reverse up 100 metres to a place where I could be completely out of the traffic. I was travelling slowly backwards, with the steel belt of the radial tyre noisily slapping the wheel well and my flashing hazard lights on, when a guy pulled in behind me and stopped. Felicity had to spend quite a while convincing him that we weren’t going anywhere and that he would need to overtake us. Changing to the spare wheel went remarkably smoothly, thanks to my purchase of a hydraulic jack after the last puncture taught us the standard van jack only works on the other three wheels, so it wasn’t long before we were mobile again.

Dinner and the company was very pleasant, and it was nice to be able to have a couple of glasses of wine, knowing my bed was just outside the front door. We had decided to leave before breakfast so that we could check out the Whangarei farmer’s market, in the hope of finding some of the small Maori potatoes known as Taewa. I think the ones we bought were the Kowiniwini variety – white flesh but a purple skin.

We were excited to find a store selling Alpaca meat – we enjoyed eating this in Peru and I have always hoped it would become available here. We also bought a bag of oyster mushrooms, some delicious soft cheese, and a loaf of rye bread from a German baker who thankfully doesn’t believe it must be contaminated with caraway seeds.

Fully stocked with local delicacies, we drove to the river-front and enjoyed a leisurely breakfast, the started hunting for a new tyre. We started to get a little worried when the first few places didn’t have one in stock, but eventually we were sent to Bridgestone Commercial and an obliging young man replaced our spare.

By late morning we were on our way north again, but we didn’t get far before deciding to check out a Motor Caravan Club campsite on the grounds of Whananaki School, situated right on the estuary. It turned out to be absolutely chock-a-block with club vans having a rally, so we continued a bit further on to the DOC camp at Otamure beach.

This turned out to be an idyllic spot so we found a good position under a pohutukawa tree, had a swim in the clear water of the beach, then relaxed in the van for an hour or so after lunch. By mid-afternoon we were ready for some action, so we walked over the headland to the north and down a track to Tauwhara Bay. The high tide prevented us from going any further around the coast so we returned to Otamure, spotting some of the rare Pateke ducks (I think) along the way. There is a short track up to the southern headland, with a magnificent view of Motutohe Island, and we were able to get around to the next bay south.

On Sunday we decided to walk the Whananaki Coastal walkway, which starts by crossing the “longest foot-bridge in the southern hemisphere” to Whananaki South, then winds its way down to Sandy Bay, just north of Matapouri. In one of the photos you can see the track passes some mature and healthy-looking kauri growing right at the back of the beach. We had a swim as soon as we arrived, and found a sheltered spot in the grass to eat our lunch. We were just polishing off the last bit of 2014 Christmas cake (or so we thought at the time), when a brief shower of rain forced us into our ponchos.

On the way back north we made a detour off the walkway to see the Capitaine Bougainville shipwreck memorial. In 1975 a ship caught fire and 16 people subsequently died in the surf, making it Northland’s worst maritime tragedy. From there we climbed down to the beach below, and followed the coastal rocks back to the road. We detoured through the tiny Whananaki South settlement, which is apparently where Winston Peters comes from, and has a house.

We had planned to kayak in the Whananaki Estuary on the Monday, but when we saw how calm the sea was we changed our minds and launched at Otamure Bay. Once we got out past the shelter of Motutohe Island however, there was quite a big ocean swell, which made Felicity a bit nervous, so we only went as far as the “Four Islets” at the start of Rockells Bay before turning back and following the coast south. By this time a sea breeze had sprung up, and quite powerful gusts began to hit us. Once we were back behind the island, it became pleasant again, so we continued to the point where we could look down the coast to the south.

When the kayaks were stowed away on top of the camper’s roof we went for a last swim to wash off the dust. The swells were making quite a nice little wave break, and I managed several thrilling body-surfs. The early, cool evenings indicate summer is pretty much over, but I’m glad we took advantage of the last warm daytime weather.