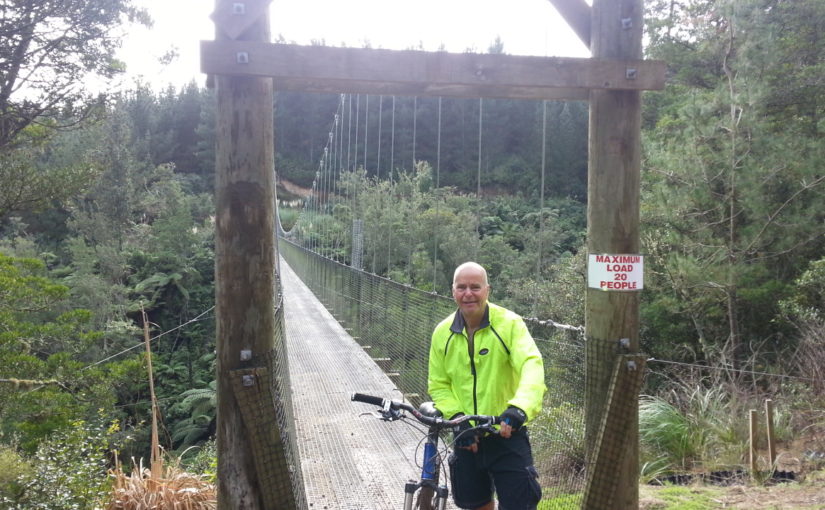 While Felicity is in Mexico, and the autumn weather is still benign, I decided to head south in the van for a few days to explore some new trails. I had to meet a client on Monday morning, so I didn’t leave Albany till mid afternoon, but I was early enough to be ahead of the rush hour traffic and arrived on the outskirts of Hamilton just before 5.00pm.

I grabbed my tablet to check the Campermate App for parking spots, and discovered to my horror that the charging lead was missing. This device is not only my main navigator, but also what I intended to watch movies on at night so this was a minor disaster.


There was enough battery to discover that PB Tech in Hamilton would be open for another 40 mins, and that I could get there in 25. I inched my way through the rush hour traffic following the voice navigation (who has multiple personalities and talks in both American and UK English) and sure enough pulled up outside the store with 15 mins to spare. They sold me the essential $11.00 lead and my emotional equilibrium was restored.

By this time it was getting dark, so I decided not to explore but to return to Lake Ngaroto just down the road towards Te Awamutu where I camped a couple of weeks previously. I again forgot to take a photo.

In the morning the sun was shining brightly when I awoke, and I was a bit tempted to jump on my bike and whizz around the lake. I decided that I would save my energy for a longer trail, so did my morning chores and hit the road. I hadn’t been driving long when the sky clouded over and it started raining. As I was passing Lake Karapiro I realised that I needed to change my plans, so I pulled over into one of the rest areas and read my book for a couple of hours.

By about mid afternoon I noticed that the sky was clearing again, and discovering that I was only a few kilometres from the start of the Waikato River Trails, this seemed like the obvious place to head. I rode sections four (Maraetai) and five (Whakamaru) to the south of Mangakino a couple of years ago, but I have never done the northern half of the trail.

I rode 11.5 km each way – Karapiro trail notes
The first five km of the trail was right beside a road which was not very exciting, but after it reached Little Waipa Landing it followed the edge of the lake and was much more attractive. When I reached Arapuni Dam I rode over a long swing bridge built for the the workers to walk from the town to the power station, then down Powerhouse Road to the bridge back to the east bank and the trail home.

Little Waipa Domain looked like a nice place to camp when I rode through, so I drove south the 5km and spent another peaceful night beside the river.

I rode 16 km each way – Arapuni trail notes
The Arapuni section of the trail has a 15km section of road in the middle of it, which doesn’t interest me much. I decided to ride in from the southern end at the Waipapa Dam, and turn around when I reached the road. This is classed as an “Advanced” trail, because there are some steep climbs and it is quite remote.

I stopped for lunch at the Mangawera suspension bridge, which is 42 metres above the creek far below. I met one of the few other bikers I saw, and we took each other’s photographs – which is why I’m not wearing my helmet. I considered turning around at this point, but it was only a bit over five km to the road so I decided to press on.

I was starting to think it couldn’t be much further when I came to a quarry with a big security fence. On a ledge above me, I could see excavators and trucks working. And I could hear them – the previously peaceful rural sounds had been replaced by an industrial cacophony. Way above these machines I could see another level of the quarry, with more vehicles shuttling back and forth.

The guy who took my photo warned me that there was a “bit of a climb” out to the road at the end, and he wasn’t exaggerating. The trail wound backwards and forwards across the hillside heading upwards without relief. Eventually I was looking down on the quarry far below, with the machines on the bottom level looking like toys. I found afterwards that the climb up this hill gains 250m.

The good thing about long, unrelenting hills when you are on a mountain bike is that they are very exciting to come down again. I was back down at the lakefront in no time, thinking that it was well worth the effort. If you only do this trail one way, make sure it is north to south so that you enjoy this hill.

Since I was enjoying the Waikato trails so much, I thought I might as well stay on them, so I drove to Mangakino and parked at our favourite spot down on the lake front. There are another few kilometres of road connection to the north of town, so in the morning I drove to the Maraetai Power Station entrance road and started the end of the next trail there.

I rode 15.5 km each way – Waipapa trail notes
This section is also classified “Advanced”, and the guide says it is the most difficult, again because of some steep hills. There’s no shame in walking when you have to! The first section around the Maraetai Dam was interesting, with old concrete structures being reclaimed by the jungle just like in Angkor Wat. The “Temple” in my photograph was actually a concrete batching plant.

After a lot of hills the trail emerged on a bluff far above the river. I stopped for elevenses and a rest, which was a good idea because the next few kilometres were continuously down, down, down until I was on the edge of the water I had been looking down on not long before.

The trail from here on was mostly single-track through native bush, cut by machine so quite flowy and fast to ride. I could hear that a road was not far away, but it seemed like quite a long time before I came to the end at Waipapa Dam. I turned around at the road and headed back to a spot beside the river I had picked for lunch. The boardwalk section in the photograph is probably the most un-typical example of this particular trail!

After lunch I had to ride all the way back up the big hill, but it wasn’t too traumatic, even though my leg muscles were starting to protest. Later, when I reached some of the steeper climbs near the beginning of the trail they rebelled and I had to get off and push.

The weather forecast showed a band of stormy weather passing over the country on Saturday, so I thought about heading home. But I didn’t feel like a long drive and it seemed possible that there might be some fine weather in the morning, so I drove north to a campsite at Jone’s Landing, where the northern off-road part of the Arapuni Section finishes.

I was about to go to sleep when a thunderstorm started. I had the curtains open for a while so that I could watch the lightening displays, but exhaustion put me to sleep. I was woken an hour or so later by the sound of a tree crashing against the van, which was rocking from side to side in the strong winds. I had parked beside a tree, but not underneath it, but with all the wind and rain I was not inclined to go out and investigate.

In the morning I discovered that a the tree must have been bent right over in the wind to touch the van, and that a big branch had broken off and been blown over my roof. My other discovery was that the sun was shining, so I set off north on the final section of the trail.

I rode 5 km each way plus a 3 km loop
One page of the River Trails website says this section is graded 5 “Expert”, which is a bit of a pity because it is rather attractive, and short enough to attract families. It does climb over a couple of bluffs, and so steeply that in a couple of places I had to walk, but the recommendation that novice riders use the road instead seems a bit unnecessary.

When I reached Arapuni, I had another trip across the suspension bridge, but this time headed up the power station road to cross the bridge and the dam back to the east bank. Even though it was quite a short ride, I was glad to get back to the van and put my feet up.

One thought on “Waikato River Trails”