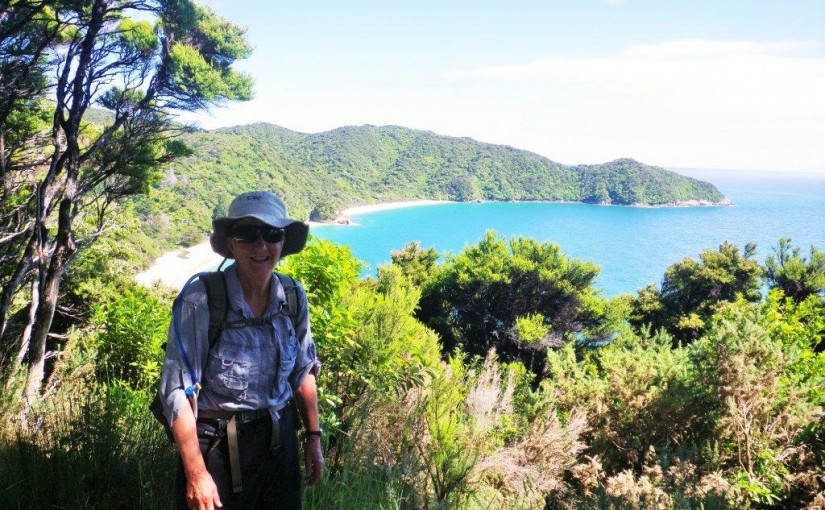 My last visit to Totaranui was almost three decades ago when Felicity and I tramped the Able Tasman Track. That time we just passed through this huge camping area, so it has been nice to spend a bit more time here.


There are only about 300 people in residence at the moment, but by the end of the week there will be almost a thousand according to the ranger. We are parked in a prime spot under the trees just back from the sea, where we can hear the waves breaking on the beach.

Since it is a beautiful sunny day, we packed a picnic lunch an headed north up the coast to Separation Point, about three hours away. This part of the country is stunningly attractive, with mostly native bush from the hill tops to the coast. Rata is just beginning to flower, so there are occasional bright patches of crimson in the green trees. The sea is bright turquoise, and each beach is covered in bright golden sand, so it is a very colourful environment.

The first interesting creature we saw was a blue penguin, but it was either sleeping very soundly or dead. A bit further on we saw two grey chicks that looked like long legged ducklings, and it wasn’t until we noticed two oystercatchers nearby that we realised what they were. The parents were remarkably relaxed about us being near to their babies.

We were walking over some rocks on a beach when I noticed we were only a couple of metres from a huge seal sunning itself on a rock. We had to go quite close to get past, and it lifted its head to keep an eye on us but wasn’t aggressive. From that point on there were lots of seals to look at.

At the turnoff to Separation Point there is a sign saying that the track is very steep and that packs should be left there. Since there were at least four weka hanging about attempting to look innocent we decided to keep our packs safely on our backs!

When we came out of the bush at the top of the cliff I could hear a lot of bird noise, and spotted what looked like a gannet on the rocks below. When we got a bit closer though it turned out the gannets were made of plastic, and the calls were coming from a loudspeaker. A notice informed us that there is a huge colony of about 5000 breeding pairs across the bay on Farewell Spit, but since the area is vunerable to erosion a local conservation group is trying to get a new colony established at the point.

There was also quite a bit of noise from seals on the rocks below. We could see quite a few pups getting out of the water, and I soon spotted the reason why. Two orca with their long, thin fins were lurking a hundred metres or so off shore, no doubt hoping for a tasty lunch. We hung around for a while to see if they would get lucky but they eventually gave up and continued on their way.

A couple of kilometres back along the track we stopped at Mutton Cove for a swim before lunch. I hoped the orca weren’t around although they aren’t known for hunting humans. We rinsed off in a freshwater creek and found a spot out of the breeze to eat our sandwiches.

While we were getting dressed, a weka came out of the bush and pecked hard on a bottle of sunscreen in the side of Felicity’s daypack. I could see quite a few bits of equipment hidden in the bushes around the campsite, so I imagine it isn’t a good idea to stray far from your belongings in this area.

We detoured off the main track to do an extra loop around the headland to the north of Totaranui, then removed our boots to cross the tidal creek at the end of the beach. There were dozens of kids playing in the clean, warm water – I can see why this is such a popular spot for family holidays. We had another swim at the beach beside the van, then a cold shower at the toilet block before coming back for a spot of coffee and blogging.