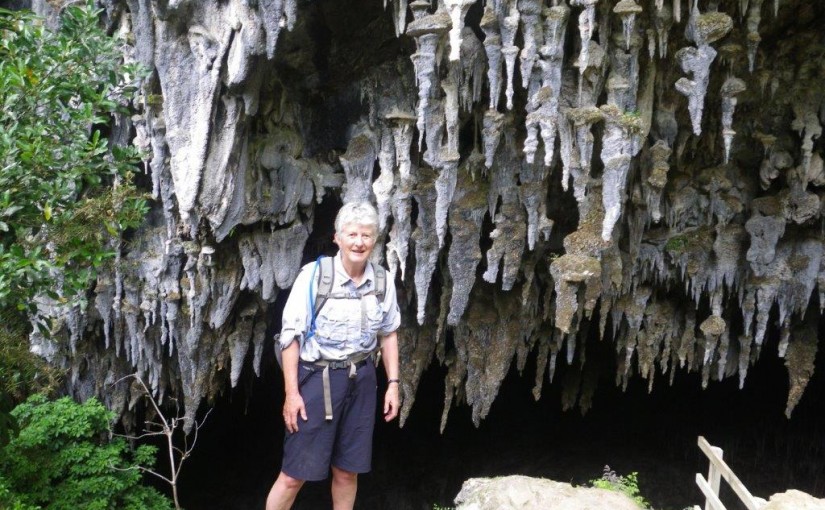 With our stowaway rat on board we drove over the hill from Nelson to Golden Bay. Ms Rat was obviously rather hostile about us killing her babies, because she had destroyed a brand new packet of coffee overnight.


At John and Jocelyn’s house in East Takaka we found a flat spot on the side of the road, and joined Jocelyn’s cousin and his wife for delicious pizza on the deck. Both Felicity and I had a few hours work to do in the afternoon, so we were greatful to be able to use their wifi.

The weather was stinking hot, so we were keen to go for a swim in the river. Unfortunately the pool that is normally in front of the house had dried up so we drove down the road to Paynes Ford where the water is more reliable. Wading through the didymo scum at the edge of the water was a bit unpleasant, but once we were in the deep water it was very refreshing. This swimming hole is surrounded by limestone rock formations and attractive bush.

We considered sleeping in the house, but there had been no sign of rodents all day so Felicity decided it had probably departed. Nethertheless we set our new trap with some cheese and peanut butter, and left it in one of the storage bins. There were no suspicious sounds overnight, but when I checked in the morning the trap had done its job and the rat was deceased, much to our delight.

That day was also spent mostly on our computers, catching up with work from the previous week. About mid-afternoon we enjoyed another swim at the ford, and watched some young men learning to walk on a tightrope over the water. In the evening we took our hosts to their favorite restaraunt for dinner then said our goodbys, as they were heading off at 6.00am next morning to catch a ferry to Wellington.

Felicity and I headed to the supermarket to re-stock the van, then called in at the DOC office to buy some more hut passes and ask about kayaking opportunities. We crossed the road to visit the public toilets, and were very impressed by the town’s new war memorial. There is a black marble pillar for each recent war, starting with the Maori wars and ending with the peacekeeping missions in Afghanastan and Iraq. We couldn’t help noticing that space seems to have been left for several more future wars!

We were ready for a bit more excersise by now, so we climbed up a steep hill to visit Rawhiti Cave. This cave is very unusual because the winter sun reaches right to the back wall of the entrance, allowing coloured algae to grow. This is combined with calcium to form phytokarst, which results in the stalactites on the ceiling growing outwards towards the sunlight. I have never seen this phenomenan before. On the way back from the cave we saw an unusual black fantail.

After lunch in the van, we drove to the Grove Scenic Reserve for a quick walk through more interestingly sculptured limestone formations. The rocks have rata vines growing all over them, and nikau palms in the spaces between, so it is a rather unusual environment.

Our next stop was the Anatoki Salmon Farm, where tourists can catch their own fish and have it prepared however they want to take away. I was mostly interested in their free wifi, because I still had a couple of urgent jobs to complete. We did purchase some smoked salmon for dinner, and walked around the attractive site on the edge of the Anatoki river which supplies the cleen water for the salmon to grow.

We drove out past the Tui Community to have a swim at Wainui Bay. We were fortunate to have the beach to ourselves, so we didn’t need to bother with clothes. There was even a small freshwater stream where we could wash of most of the salt. The sea is several degrees cooler than Auckland, so there are some advantages in living up north.

Since all the flat spots beside the road had “No Camping” signs, we decided to drive over the hill to Totaranui in the Able Tasman National Park for the night.

One thought on “Takaka”