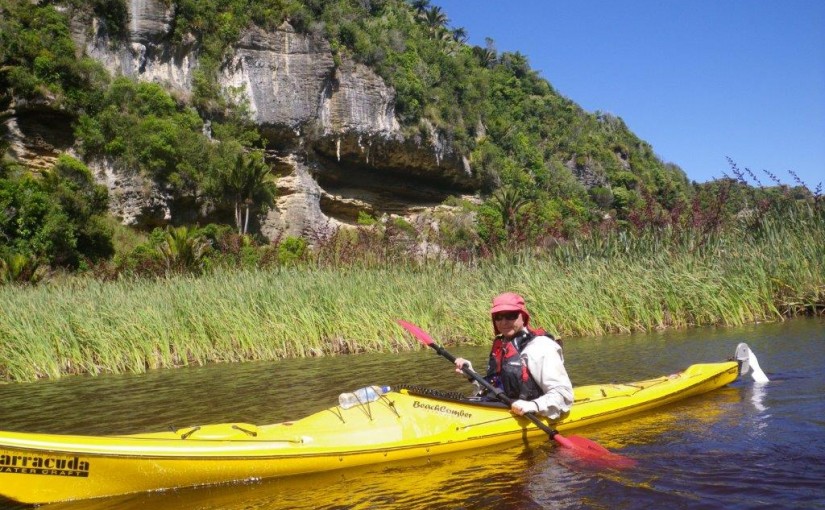 After a stop in Takaka to stock up on food and diesel, and for me to do a couple of urgent web update jobs for clients, we drove out past Collingwood to the west coast.


Near the end of a long, dusty metal road we found an idyllic camp-site at Anatori, overlooking a wild beach. We had a small clearing all to ourselves which was a bit of a surprise, but when we walked down to the river for a swim we saw a bunch of other vehicles parked further from the road.

There was nobody about near the water, so we swam naked in a deep pool then sat on a smooth limestone rock in the late afternoon sun to dry off. We timed it perfectly because another couple and their dog walked down from the camp just as we were getting dressed.

Felicity had bought a whole salmon for dinner, so we collected some driftwood and I made a small (and probably illegal) fire to cook it on, wrapped in aluminium foil. We watched a beautiful sunset over the sea, then a nearly full moon rising over the hills behind us.

In the morning we headed back a few kilometres to the bridge over Sandhill Creek, where we had seen we could park safely off the road and launch our kayaks. We negotiated a few big logs with some difficulty, then came to a low rapid that would have forced us to get out and drag the boats. Fortunately I had noticed a tiny side stream entering from the left and I figured it must be the way we were looking for so we paddled back and headed up it.

It took us almost an hour winding up a narrow channel, with beautiful red flax flowers, ferns and kei-kei vines lining the bank. Sometimes we could paddle over the flax flower stalks, but sometimes we had to lift them over our heads to get past. In front of me, Felicity disturbed a duck which tried to fly away in panic just as I was passing. I thought it was going to crash into my head but it gained enough height just in time.

We entered a narrow valley cut through high limestone cliffs. We could see stalactites hanging down from ledges, and lots of interesting rock formations. On this part of the coast the predominant tree is the nikau palm, so the environment almost felt pre-historic.

Eventually we arrived at Lake Otuhie, and spent the next hour paddling around the edge. One large limestone rock at water level had some holes in it that made several musical notes as the lake surface rose and fell. Almost all of the lake was surrounded by native bush, with huge rimu and totara towering over the nikau.

At the head of the lake we disturbed huge flocks of swans and ducks. Some of the baby cygnets were too young to fly, and had to make do with paddling frantically to get to safety. Apparently black swans went extinct after Maori arrived in NZ, but have successfully re-established themselves from Australia.

A small beach with a rocky overhang made a great place for a swim and a picnic, although the sand turned out to be a bit wet due to a tiny trickle of fresh water spilling from the roof. There was enough dry rock for us to sit, and whn I examined it closely I could see seams of flaky black that I’m pretty sure was coal.

On the way back, we kept paddling past the bridge and down to the beach, where we could see the waves crashing on to the sand. Neither of us fancied continuing out into the Tasman so we returned to the van and packed away all our gear.

We are now just south of the Wairoa river, parked in the bush off the road on the edge of the estuary. We found a tiny track down to the shore where I discovered the slipperiest mud I have ever encountered by falling on my bum the moment I stepped on it. I had intended to swim naked again, but the need to wash the mud off my clothes changed my mind.