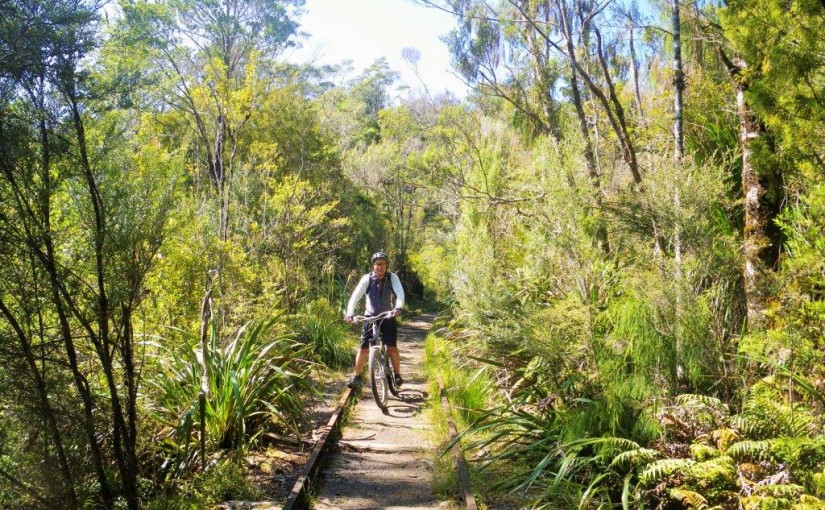 The Charming Creek Walkway runs from Ngakawau through to the Charming Creek Road at Seddonville, a 19km return trip. We had planned to walk it together today but when I discovered you can ride it on a mountain bike I came up with a cunning plan.


I dropped Felicity at the Seddonville end so that she could walk one way, then drove to the other end so that I could ride it in both directions. By the time I had cleaned all the dust of my bike, oiled the chain and pumped up the tyres, it was an hour since Felicity had begun walking, so it seemed likely she would arrive at the van before me – which makes it worth the $900 we had to spend for her to have her own set of keys.

The track follows an old railway line, mostly alongside the Ngakawau River. It was originally built for hauling logs out of the hills, but later it was used for bringing coal from numerous mines. The first section I rode through the Ngakawau Gorge is a spectacular feat of engineering. There were a couple of tunnels and numerous bridges, including one long suspension bridge across the river.

After about 40 minutes I met Felicity coming towards me and we stopped at a shelter for a while to eat a mandarin for morning tea. Although the track is basically flat, there were enough technical sections to make it a challenging ride. I had suggested that she ride with me, but I could see it wouldn’t have been a good idea because it requires at least intermediate level skills.

There was lots of old machinery to look at, and a couple of mine shafts to check out. The northern section of the track was mostly easy to ride until near the end when a section went up some steps and over a rocky bank.

On my way back I met quite a few other riders and walkers, because the track is quite popular for good reason. For my first ride of this trip I would have to say I am very satisfied.

I arrived back at the van to find lunch on the table, following which we drove to Westport to visit our friend Lerey. We relaxed and drank tea while making use of her washing machine, then set off for a walk down along the beach then back beside the Buller River.

We realised we were walking past literally millions of wild cherries which distracted us for a while. They are about the size of green peas and about 60% stone, so they are quite a bit of work to eat. They are also quite tart, but all fruit that you harvest for free tastes good to me.

Just down the road from Lerey’s house is a shingle beach on the edge of the river, so we jumped in for a swim before heading home.