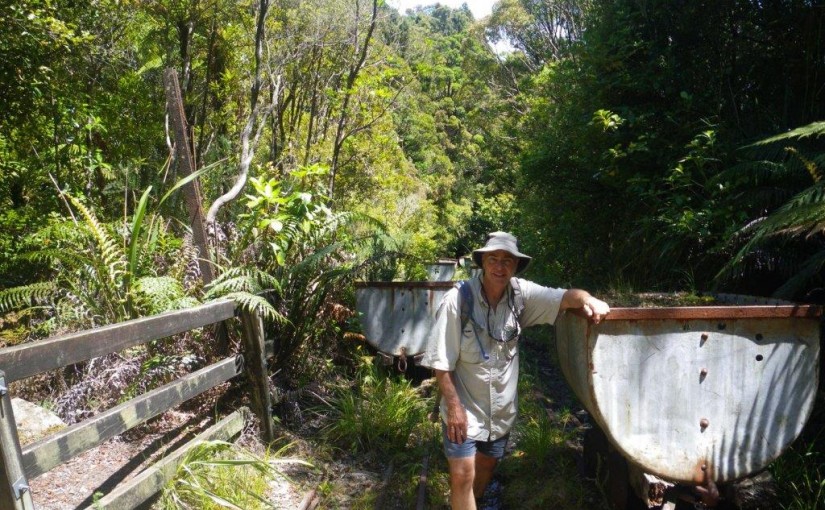 Up a winding road from Granity on NZ’s west coast is the old coal mining town of Millerton. Like its much more famous neighbour Denniston, it had an incline which allowed wagons of coal to be lowered down to the railway along the coast.


The mine was opened nearly 120 years ago, and operated until 1963. Some time since then a lot of effort went in to making it a tourist attraction, but there is clearly only room for one famous incline in the district and Denniston won out, so now there is a whole new layer of run-down infrastructure.

When we arrived my first thought was that the population had probably grown by 200% with our arrival, but as we drove around we spotted a number of houses tucked away in the bush – some of them even for sale. One old house had a sign claiming it was an “Information Centre”, and it contained some interesting historical photos and maps, but little useful info about what we might see. The house was still fully furnished, with a fridge and stove, and even plates, a teapot and biscuit tins, but it must be at least a decade since it was inhabited.

The first place in town we explored was the mine bath house, where forty workers at a time could shower at the end of their shift. The round steel object behind Felicity in the photo is the coal-fired boiler which produced the hot water necessary to clean so many miners.

We then climbed a set of concrete steps through the bush to look at the top section of the incline, which runs through numerous tunnels on its way down the hill. There were dozens of purple sun-orchids similar to the ones we see near home beside the track – they obviously thrive in infertile soil.

Several other tracks led past rusting steel machinery and concrete foundations, rapidly being covered with re-generating bush. A lower section of the incline still had its wagons on display, each with a layer of coal on top of rotting plywood.

A flat section of road beside an unidentified concrete structure made a good place to have lunch, then we tried following some more tracks with signs pointing to sections of the mine that don’t seem to be visible any more. One road led to a waterfall with a bridge that was blocked by huge rocks – I didn’t really manage to move one – someone with a vehicle must have done so. We walked up the unused two lane highway for about a kilometre in the hot sun before realizing that we might be doing so for hours before arriving somewhere, or nowhere.

Further north along the coast we stopped to look at the loading area for the Stockton mine, but as Solid Energy went broke recently (with the loss of 300 highly paid jobs), there wasn’t any action to observe.

Our next stop was Seddonville, where we walked the Chasm Creek walkway, a former section of railway alongside the Mokihinui River that has been long-abandoned. Two perfectly solid looking wooden bridges had been blocked off with “danger” signs, forcing us to cross outside the handrail which seemed much more dangerous to me. There was a curved tunnel that had a surprising amount of water dripping from the roof, considering how long it has been since there has been any rain.

We had planned to continue another 30km up the coast to find a free camp-site, but instead decided to stay at the commercial Gentle Annie camp-ground at the mouth of the Mokihinui where they have free wifi. Our van is parked behind the beach looking almost straight out to sea, so we should be in for a good sunset tonight.