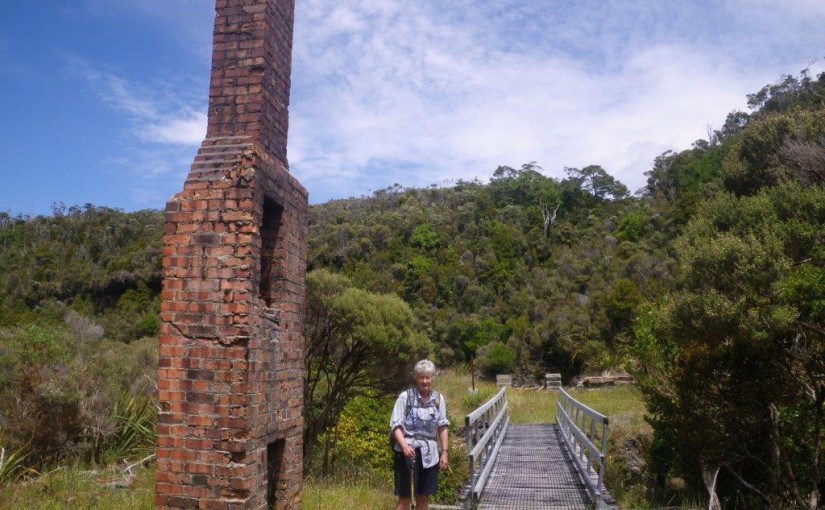 We visited Denniston back in Easter after walking the Old Ghost Road, but our hostess convinced us that we had barely scratched the surface of this old coal mining area so we drove up the hill after breakfast this morning. Lerey is friends with Gary and Sylvia James who are some of few people that still live up there, so she rang to find out if the Friends Of The Hill museum was open – which it was.


Gary was repairing the door of a shed which housed an eclectic collection of old artefacts, including an unusual wooden bus built on the chassis of an old Bedford truck. We chatted with him for a while, then went to explore the museum which is in the old high-school building. There were lots of old photos to look at, which gave us an idea about how hard life must have been back in the days when there was no road, and the walk down to the coast took several hours.

There was a replica mine to look at, complete with a somewhat moth-eaten replica horse. Some horses lived nearly there whole lives underground, only coming to the surface for a week or so at Christmas.

Further along the plateau we came to the abandoned town of Coalbrookdale. This would have been a lot more pleasant place to live than Denniston because it is in a valley, sheltered from the howling gales that blow in off the Tasman sea. In the second photo, Felicity is standing beside the site of the town library, with the ruins of the hotel in the background.

The town not only had a creek running through the middle of it, but also the rails of a rope-way along which wagons full of coal rumbled almost continuously. The locals only noticed it when it stopped because of the eerie silence.

The track we were walking on passed through a tunnel and over some bridges, leading from several mine entrances. Right at the top of the valley was a large building with a huge fan inside, used to pump fresh air through several of the mines. Felicity would like it known that the empty Jack Daniels can was left by a previous visitor.

It was rather cool up on the hill, but we decided to get out of the sun to eat our lunch, so sat on a log in the entrance of the Cascade mine. As we walked back to the van I looked wistfully at all the mountain bike tracks which run all over the plateau.

It was considerably warmer when we returned to sea level. We drove back through Westport and out to the beginning of a walkway around the coast past the cape to visit a seal colony.

There was once a railway all around this coast, which was used to mine the basalt cliffs to construct the breakwater at the mouth of the Buller River. Now there is a cliff-top walkway along the top. The entire end of the cape is now flat, just above sea level, because the towering cliffs have been removed.

We stopped to look at an astrolabe, erected to commemorate the fact that near this spot was where Able Tasman first spotted the land of New Zealand.

A bit further along the cliff is a seal colony, with a human viewpoint high above. There were a couple of big males – they grow to 300kg – sunning themselves in some of the prime spots. There were dozens of smaller seals swimming along the shore, and surfing up on to the rocks. We even noticed two tiny babies hiding in a crevice.

Just above the cliffs of Tauranga Bay is another viewing platform, this time with a set of binoculars on a stand for looking at an off-shore rock stack, which has a huge bird colony. It was a surprisingly hot walk, but very scenic and interesting.

For our farewell dinner with Lerey, Felicity made a dinner of roast lamb (since we wont have an oven for a while), and we ate it at a picnic table outside on the lawn. I was outside in the garden with Lerey later on and it started raining, at least it seemed so to me. But when I suggested we might need to take shelter, she explained that this level of rain is the sort that you take the opportunity to pop down to the supermarket before it starts really pissing down, again.

There is some rain forecast for the end of the week. I guess we have been pretty lucky with all the sunshine we have experienced till now.

One thought on “Denniston and Cape Foulwind”