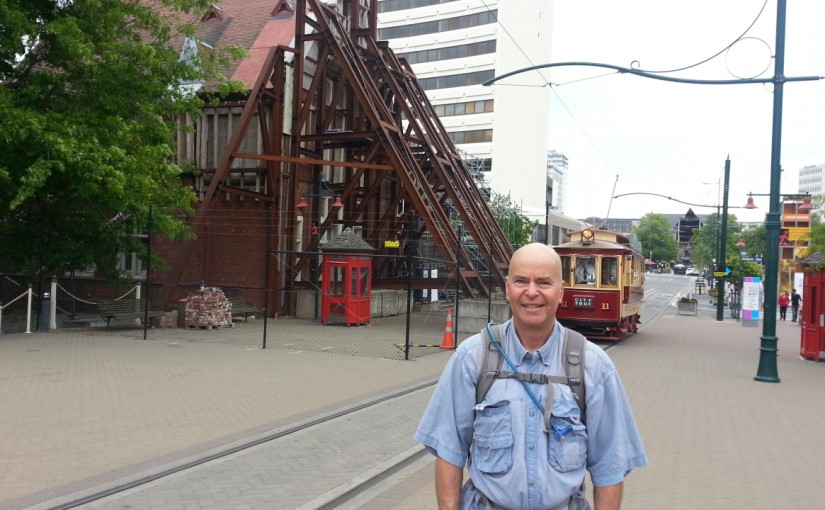 Since we are attending the NZ Skeptics conference in Christchurch this weekend, we decided to fly down a day early and spend some time checking out how the earthquake recovery is going. Last time I was here the central city was intact, so I was interested to see how much things have changed.


The area around our motel was not badly affected, so the first sign of the earthquake was a stone church propped up with steel supports at each end that we saw on our way in to town. It took over an hour to walk through Hagley Park, because there were beautiful flowering trees and shrubs everywhere. The tree in the cage is a Wollemi Pine from Australia. Less than 100 mature trees remain in the wild, discovered in a remote part of the blue mountains in 1994.

At the edge of the park we came to the Canterbury Museum, and that distracted us for an hour or so. The exhibits about life in Maori times were particularly interesting, as was the replica of the Bluff Paua House which has been re-created here. Finally, we spent quite a bit of time looking at the Antarctic exhibition, and watching a movie about Ed Hillary’s trip to the South Pole on modified Massey-Fergusson tractors.

When we finally reached the central city area, there was much more evidence of damage. Many of the high rise buildings have now been demolished, so there are lots of open spaces. New multi-story buildings can not be higher than 28 metres, and must be built with steel framing or tilt-slab concrete.

The Old Municipal Chambers was the next building we saw that needs steel supports on the outside to keep it standing. It is the only surviving Queen Anne arts and craft style building in Christchurch, but will cost tens of millions to repair.

By now it was lunch time, so we headed to the Re:Start Container Mall on the edge of the Avon river. This is pretty much the only retail area in the centre of town. There are lots of interesting food stalls, which seem to be doing a roaring trade with all the workmen on nearby building sites.

Our next stop was the old cathedral. There is a determined campaign to get it repaired, but it looked to my uneducated eye to be a lost cause. I took my photo from inside an attractive viewing space with a roof covered in plants. All over the city we enjoyed seeing artwork on fences and bare walls.

We were also keen to see the new Cardboard Cathedral. It turns out that they couldn’t make strong enough cardboard tubes in NZ, so it is actually built of laminated wooden beams covered in cardboard. It is quite an attractive building, and looks like it might last for a few decades at least.

The most moving artwork we saw was the 185 empty chair memorial – one chair for everyone who died in the earthquake. There are all sorts of everyday chairs painted white, including office chairs, a baby car seat, even a bean bag. It was a sober reminder of the range of ordinary people who were killed.

In the picture of the chairs is a sign saying that the “No Cruising Zone Ends”. Cruising is obviously of considerable concern to the authorities down here, because there are signs all over the place informing people that it is prohibited. I’ve been trying to imagine what cruising is – if anyone knows please enlighten me in the comments. I wonder how it is enforced and what the consequences for doing it are?

By mid afternoon we were both starting to get a bit tired, so we decided to spend 50 minutes riding around on one of the old trams. That took as a bit further afield from where we had been, and made a nice end to our day’s exploration.

One thought on “Riccarton Christchurch”