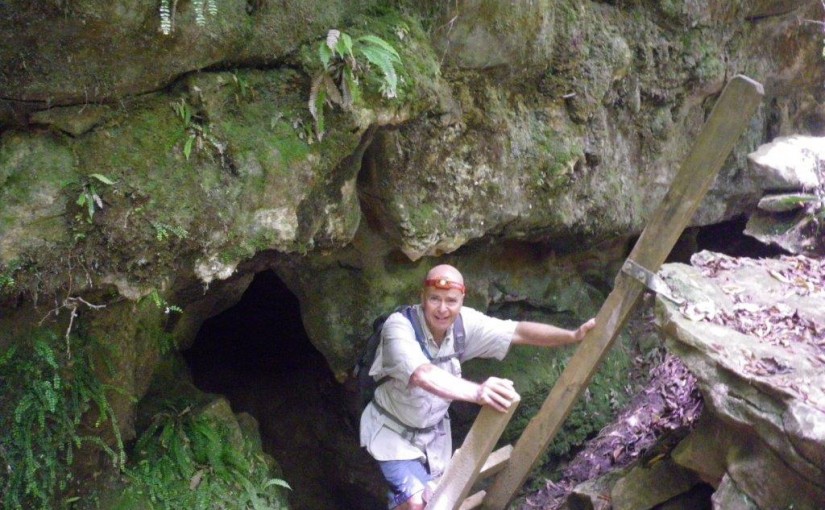 We were sorry to have missed the last Indian Ink Theatre Company production, so we decided to attend the opening night of their new play, The Elephant Thief. This meant an overnight trip to the Waikato, because the Meteor Theater is in Hamilton.


Since we are about to spend six weeks travelling around the South Island in our camper, it seemed like a good idea to have a test run to make sure there are no maintenance issues to take care of.

We were on the road by late morning, and reached the Pirongia Forest Park to the south west of Hamilton in time for lunch.

Although we really should be climbing steep mountains with heavy packs to train for our forthcoming tramp in the Richmond Ranges, we decided instead to enjoy an easy two-and-a-half hour stroll up the Nikau Walk and Kaniwhaniwha Caves tracks.

The bush is lush and sub-tropical, although I did notice more kahikatea and tawa trees than I normally see in around Auckland. Last time we walked in here the track was a farm road beside a paddock, with tiny seedlings planted at a community working day. Now it is through bush above head height, and much more pretty. The 7 km track can also be used by mountain bikes.

The caves are quite small, but worth exploring. We got enough mud on our clothes to look like real adventurers.

Since there seems to be only one camp ground in central Hamilton, we drove to the Hamilton City Holiday Park and booked a space. From there it was only a half hour walk along and across the Waikato river to the theatre, so we indulged in a bottle of wine with our dinner with no concerns about driving.

The play was very clever, and there were some innovative features, but we thought the story was a bit far-fetched and we were disappointed that the main performer Jacob Rajan was not included. But no worries, we enjoyed our evening’s entertainment, and spent a peaceful and comfortable night in the back of the van.

As we were packing up in the morning, I did a quick Google search for short walks and discovered the Pukemokemoke Bush Reserve a bit north of Hamilton. This is a bush-covered hill gifted to the public by David Johnstone, former owner of next-door Orini Downs Station, in 1991.

We spent a couple of hours exploring the track network, and enjoying the views out over the Waikato valley from the wooden tower at the top. The hills behind Felicity are the Hakarimata range in the north-west and behind me are the distant Kaimai ranges and Mt Te Aroha in the east.

This bush is at the southern extent of kauri habitat, so naturally they are concerned about kauri die-back. We were impressed by the shoe cleaning station: you step on a foam mat sitting in a metal tray, and Trigene disinfectant squishes up and wets the underside of your boot quite effectively. The stations are covered with a small roof and water-collecting system, so they would take a lot less work to maintain in areas where vehicle access is not possible.

There has obviously been a lot of work by volunteers from the Friends of the Pukemokemoke Bush Reserve. This entire area was logged in the past, followed by many years when animals were allowed to graze under the remaining trees. During that time a huge number of invasive plant arrived, and there has been an enormous effort go in to removing privet in particular.

Sadly, someone less community minded recently decided that the car park was a suitable place to dump a trailer load of household rubbish for free, so we decided to drive on to somewhere a bit more scenic for lunch.

We allowed Google to navigate us along back country rural roads until we reached Highway One at Ohinewai. By continuing straight through the roundabout for a few hundred metres, we came to a landing on the bank of the Waikato, which made a perfect place to stop and enjoy the view while we ate.