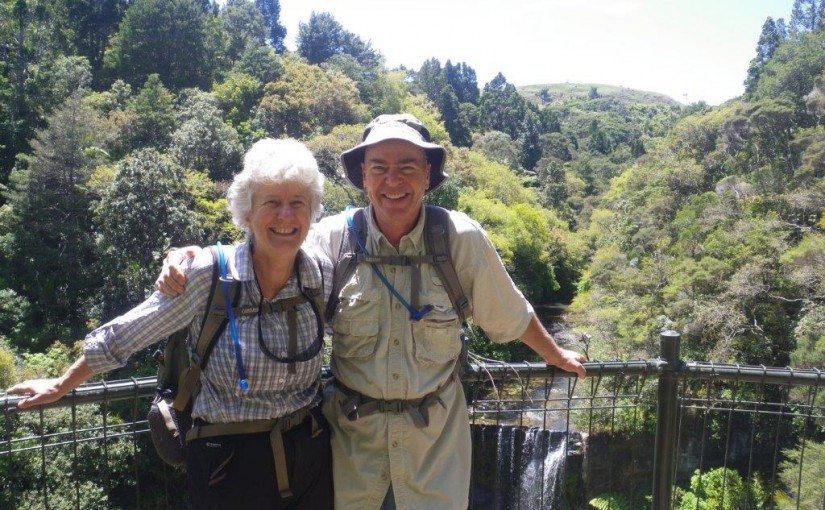 In December we are planning a five-day tramp in the Richmond Range with a couple of friends who have recently been trekking in South America, carrying full packs up over 5000 metres, so Felicity and I feel like we need to increase our fitness level significantly. Today seemed like a good opportunity to head into the bush out near the west coast for a hike.


It has probably been a couple of decades since we walked in Goldie’s Bush. On our last visit, Felicity dropped her aluminium walking sticks as she was climbing around the rock overlooking the deep swimming hole and we discovered that they don’t float. I always intended to come back with goggles and a wetsuit to try and find them, but never got it together.

When we arrived at the Mokoroa Falls track entrance on Horsman Rd, which is a bit north of the road out to Bethells Beach, we found about a dozen cars already parked. We decided to head down the easy Goldie’s Bush Walkway and return via the more difficult Mokoroa Stream Track so that we would be hot when we reached the swimming hole.

I noticed a large kanuka branch hanging rather dangerously in a tree, but when I pulled it down it just about blocked the track. Fortunately a runner coming the other way stopped and helped Felicity and I drag it out of the path. The first couple of kilometres of the walkway are very flash, with new drains and a metalled surface, but after a while it turned into a normal Waitakere clay track with regular patches of mud. A flight of stairs led us down to a swing bridge over the river, where we met a large party of intrepid Koreans heading down stream.

The trail up the river is not maintained, and it wasn’t long before out boots were wet from crossing backwards and forwards to avoid cliffs. In a couple of places we had to scramble up steep banks because the riverside trail had completely washed away. This would not be a good place to be after heavy rain!

On a fine, sunny day like today it was idyllic, and we both enjoyed the beautiful bush. This is kauri country, and we were relieved to see that the trees looked like they have so far escaped the kauri die-back that is ravaging the Albany Scenic Reserve across the road from out house.

By the time we arrived at the big swimming hole we were hot enough to jump in, but neither of us stayed in the water for long. It wouldn’t have surprised me to see melting snow just up the stream! We sat in the sun and warmed up while we ate our lunch, until I realised that I was absorbing rather more UV than is healthy.

We put our wet boots on and continued on up the river, still crossing from side to side. When we met another bunch of Asian walkers with dry shoes I figured we must be nearly at the waterfall, where a proper track completes the loop to the car park. I told them they would have to get their feet wet if they wanted to continue down stream.

The Mokoroa Falls are very pretty. The main river spills over a rock wall, and a smaller side stream splashes over the rocks near by. There were dozens of welcome swallows circling above us as we admired the view.

We climbed a steep flight of steps up to a lookout platform at the top of the falls. We could see paddocks on the hill behind, so this is near the northern edge of the reserve. Another couple took a photograph of the two of us.

From the lookout another well-maintained track led back to the car park, which took us just over 15 minutes. We passed lots of families walking down through the kauri forest to see the falls.

We arrived home mid-afternoon, but since it was so sunny we decided to go down to Long Bay for our second swim of the day. The sea was much warmer than the river, especially since the tide had come in over hot sand. It feels like summer has arrived.