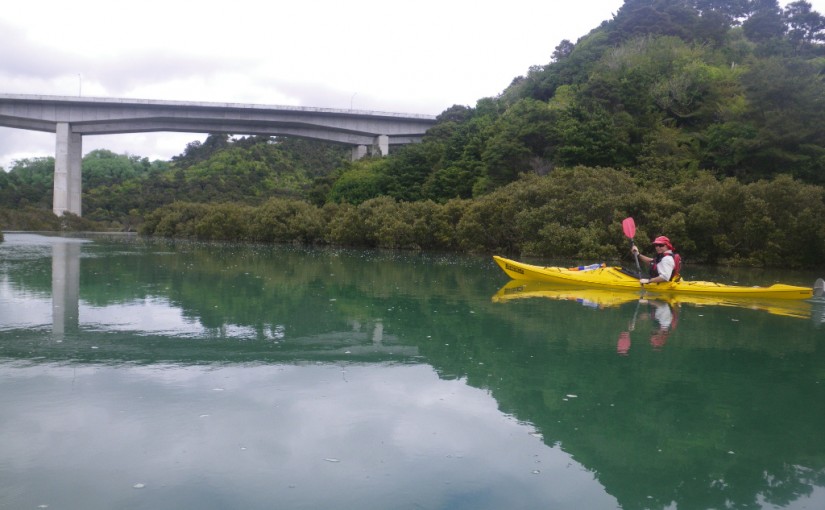 After a long walk around Omaha Beach yesterday, we decided that we would rest our legs and exercise our arms today by kayaking up the Waiwera river.


High tide was still almost two hours away when we arrived at the boat ramp at the side of the Hibiscus Coast Highway, so we began by paddling against the current, heading out to sea around the edge of Wenderholm Regional Park. We could see that quite a big chunk of the headland has recently slid into the sea, and it looks as though there will be more landslides in the near future. We paddled quite close to the edge of the rockfall, but didn’t linger!

The wind was picking up and the previously calm sea was beginning to develop a bit of a chop, so we contented ourselves with circumnavigating tiny Mahurangi Island then retreating to the calmer waters of the estuary.

The northern bank of the Waiwera has beautiful native bush growing right down to the water’s edge. The kowhai are past their best unfortunately, but the pohutukawa are beginning to flower so it is very pretty.

Last time we kayaked up this way the Northern Gateway viaduct was still a building site, but all signs of construction have been removed, and apart from areas of gorse where the ground was left cleared it looks quite established.

Above the high bridge the river becomes narrow, and winds its way through farming country beside Weranui Rd. An occasional vehicle out for a Sunday drive disturbed the tranquillity, but there were almost as many Lycra-clad cyclists enjoying the rural environment.

Quite a long way up the stream we passed a large catamaran up on the bank which has been sitting there as long as I can remember. Presumably someone still has a dream of fixing it up and floating it back down to the sea where it belongs.

Not long after squeezing under a low farm bridge we came to a concrete ford and decided that it was time to turn around. We probably could have managed to get out and drag the boats across, but according to the map the river becomes a small creek above this point.

A few hundred metres back down river we found a spot where it looked easy to land to have our lunch, and we were delighted to find a picnic table in the corner of a paddock, just in the right place. There wasn’t enough sun to encourage us to hang out, and as we could see that the current was now flowing downstream we packed up and departed soon after we finished eating.

Felicity stopped to take a photo of a couple of gulls on a log, but she drifted a bit close and they flew away. I had unpacked my phone from its waterproof pouch while I was waiting, so I got a shot of her just after that.