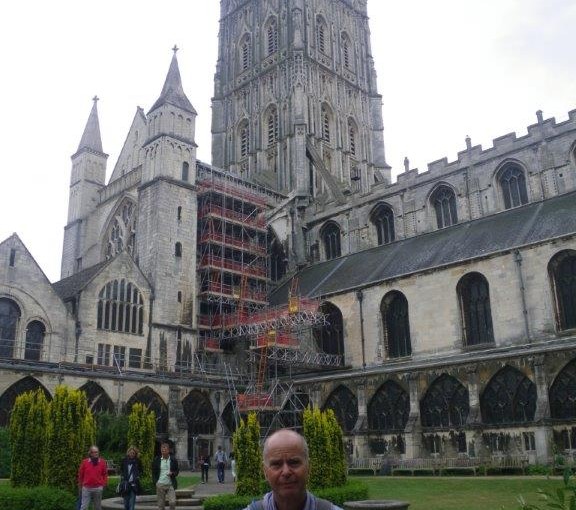 On our way back to Oxford we stopped off to visit Gloucester Cathedral, which people have told us is one of the best examples in the country.

It is not easy to find accommodation in the Lake District at short notice in the middle of summer, so we ended up in Barrow-in-Furness, which is possibly as big a contrast as you could imagine. Once the site of the world’s largest steel smelter, it is now the home to BAE Systems, which used to be the Vickers shipyard and aeroplane builder. These days they are primarily a military manufacturer, making among other things Trident nuclear submarines. Our hotel was in the middle of huge industrial buildings with high security fences. As we walked along the streets I could see video cameras every hundred metres watching our every move.

On route to Gloucester the next day we stopped to visit one of Felicity’s colleagues, who lives on a very attractive rural property at the edge of the Cotswolds. We enjoyed a BBQ dinner, sitting outside without rain, wind or midges to contend with. Our hotel that night was a bit of a dump, with a very clever photograph on booking.com which made it look like a historic country pub.

In the morning we found a parking place in town and walked towards the Cathedral. We were distracted by what used to be the leaning steeple of St Nicholas. The church (just visible behind me in the first photograph) was built on insufficient foundations, and the heavy stone steeple began to lean further and further. In 1910 the top section was removed for safety reasons and is now on the ground beside the Via Sacra.

The cathedral is magnificent. We were fortunate enough to score a very informative volunteer guide to ourselves, and he pointed out hundreds of small details that we would never have noticed on our own. The first church on this site was established in 678, and it became a Benedictine monastery soon after the turn of the millennium. Not long after that William the Conqueror began the current building, and many of the original Norman features are still visible.

In 1327 Edward II was buried here, after dying in mysterious circumstance while imprisoned in nearby Berkeley Castle by his wife and her lover. A few years later his son Edward III (who was technically king already), locked up mum and her boyfriend and seized the reigns of power. He built a magnificent tomb in the abbey for his father which became a pilgrimage site and brought wealth to the church and the city.

When Henry VIII dissolved the monasteries in 1540, Gloucester escaped destruction because his predecessor was buried there. He transformed it into the Cathedral for the new Diocese of Gloucester. There was another close call in 1656 during the English Civil War, when parliament abolished the Dean and Chapter and plans were made to demolish the building. It was saved by the mayor, so it still existed when Charles II re-established the cathedral.

During World War II there were more fears that the building would be bombed, so many of the treasures were removed, and the beautiful Great East Window was taken down and stored in the crypt. Each panel was carefully labelled, but after the war it was discovered that damp conditions had caused the labels to fall off so the only record of where everything went was a small postcard from a nearby shop. Not everything ended up in the correct position.

I enjoyed exploring the crypt underneath the building. The water table has risen quite a bit in recent years, so we could see puddles around some of the foundations. Felicity took a surreptitious photograph of the cloisters, which unfortunately is a bit blurry. We would have had to purchase a photo permit to take shots inside legitimately.

After our tour we took a break for lunch then returned to do some more exploring on our own. We were lucky to be entertained by a school choir singing hymns accompanied by the huge organ. Upstairs is a stone passage behind the east window that works as a whispering gallery. It was strange to hear each other quite clearly when whispering from opposite sides of the building.

We had planned a leisurely drive along minor roads through the Cotswolds back to Oxford, but we got distracted by signs pointing to Chedworth Roman Villa. These days it is in a remote rural area, but 2000 years ago it was close to a major Roman road leading to Gloucester, which in those days was called Glevum. This villa was actually a small agricultural community, which was at it’s greatest extent during the 4th Century.

The Romans enjoyed a very comfortable life, with under-floor heating, two separate bath-houses with saunas, hot and cold pools, and beautiful mosaic tiled floors. After the Romans left it fell into ruins and was lost to history until 1864 when a gamekeeper discovered a few coloured tiles deep in the forest. The Victorian landowner Lord Eldon excavated the site (unfortunately not very carefully), and built shelters over the most delicate ruins.

The site is now owned by the National Trust, and archaeologists are still finding new sections of flooring and remains of buildings. We could have easily spent another hour longer than we did, but our rental car was due to turn into a pumpkin at 6.00 pm so we had to get back on the road.

The Cotswold area is very pretty, with many small stone villages and thatch-roofed houses. Unfortunately I had to keep most of my attention on the narrow one-lane roads so I didn’t see as much as I would have liked. Miraculously we didn’t get lost once, and we negotiated Oxford rush hour traffic to arrive at the car rental company right on the deadline.