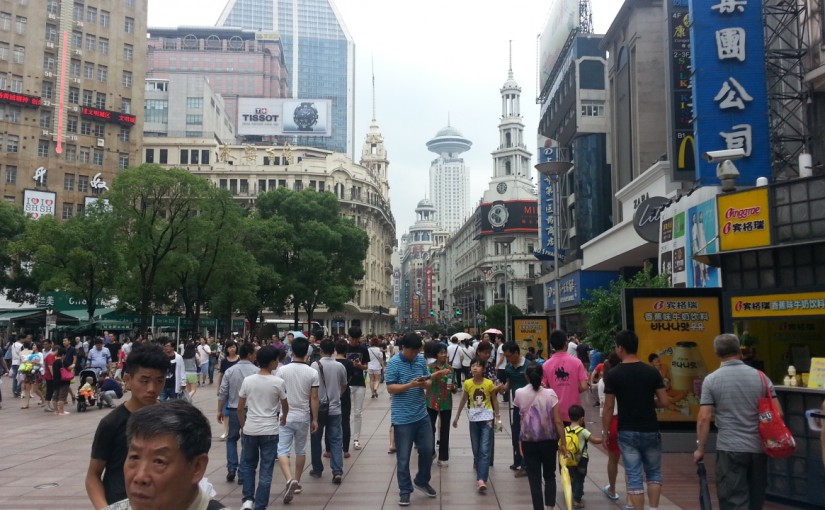 I had planned to spend two days and a night in Shanghai on my way back from the UK, but Typhoon Chan-hom’s 125 MPH winds on Friday caused my flight to be cancelled.


Wanting to leave nothing to chance, because there was a train strike and we thought the motorway into London might be jammed, I left from our friends’ place in Oxford in plenty of time to catch the 9.30 am bus. The morning traffic was moving unusually quickly, so I ended up at the bus station just in time for the 9.00 am bus, which encountered almost no congestion and had me at Heathrow soon after 10.30 when I didn’t really need to be there until midday. To make matters worse, when I went to check-in I saw that my flight was delayed by 5 hours, so I resigned myself to a long wait.

At just after 6.30 pm when the gate number was due to be assigned, I checked the board and learned that the flight was cancelled altogether. I then spent a couple of hours at the Virgin Atlantic service desk while the girl tried to re-book dozens of angry customers. There were lots of other options for me to leave the UK, but no available flights to NZ, so the only possibility was the Saturday Virgin flight to Shanghai which would give me a 12 hour stopover but not the overnight I had planned. So I bused all the way back to Oxford again and met up with Felicity just before 11pm after a completely wasted day.

On Saturday I did it all again, and this time the trip to Shanghai was uneventful. The Kiwi woman I was sitting beside on the plane offered me the use of her hotel room for a shower, so we travelled in to town together. She had been intending to take a taxi, but I was keen to ride on the world’s fastest train, called the MagLev. Instead of wheels, this train has powerful magnets which push it just off the steel track so there is no friction or noise. It looked pretty much like a normal train inside, apart from the digital read-out at the front of every carriage. For the first couple of minutes it just kept accelerating, until we were travelling at 431 kilometres an hour! This continued for only a few minutes until it started to slow down and stopped at the end of its track 30 km from the airport. The 8 minute ride was well worth the NZ $12.00 ticket price.

We caught a normal Metro train the rest of the way to the East Nanjing Road station (which cost only $1.00), dropped Elle’s bags at her hotel and went out looking for lunch. Shanghai is a very crowded and busy place, but there are thousands of restaurants to choose from. Food prices in the downtown seemed similar to what we might pay in NZ, but there is a bewildering choice of Chinese and western food.

I headed off on my own to have an explore, intending to walk down to the Bund along the Huangpu river-front. After missing a night of sleep, my brain was barely functioning, so I made the twin mistakes of heading in the wrong direction and not obtaining a map. The streets aren’t in a nice, neat grid area either, especially as they curve around the surprisingly green People’s Park. I passed quite a few old style buildings buried among the futuristic sky-scrapers. One looked like it had once been a temple, but nowadays it is something connected with the Communist Party.

My circuitous route led through a residential area, and my attention was drawn by a loud chirping sound to a shop selling strings of gourds. Each of the little round baskets in my photo has a cricket inside, presumably intended to be a kind of pet.

After more random walking I ended up outside the Shanghai Museum, and took the radical step of asking a policeman the way back to Nanjing Rd. By the time I arrived in familiar territory I was just about dead on my feet, but a cup of coffee revived me enough to set off again.

At that point a very friendly middle-aged Chinese man started talking to me and asked if he could practice his English. Sitting on the bench beside him watching the crowds go by seemed like a good plan, so I agreed. After a while he asked if I would come and have a cup of tea with him, and although I wasn’t very keen I allowed myself to be persuaded. We went to a comfortable and quiet cafe nearby and continued talking. Besides tea he ordered a plate of fruit and bowel of nuts which he kept pressing on me, and which I also didn’t want but ate a couple to be polite. When I said I needed to get going he asked for the bill and the waitress came and put it very obviously in front of me. I had a quick look and saw it was for the equivalent of NZ $72! Realising it was a scam I began walking out immediately. The waitress tried to block my way but I quickly pushed her aside and took off as fast as I could before they had time summon re-enforcements. It was not a particularly nice experience, but at least it didn’t cost me.

I called in at Elle’s hotel and enjoyed a very welcome shower and change of clothes. She had been sleeping all afternoon, so was probably in for a wide-awake night. I said goodbye and walked back to the metro, this time buying a NZ $1.70 ticket all the way to the airport.

I had figured out that line 2 went all the way, but I hadn’t figured out that you need to change trains at Guanglan Road. My sleep-deprived brain did vaguely notice the train empty out – especially of other travellers with suitcases, but it wasn’t until we were rapidly heading back into town that I realised I had missed a vital bit of information. Fortunately I had plenty of time, so I disembarked at the next station and caught a train back to Guanglan Road and transferred to the airport service.

From then on everything went according to plan, and the Air New Zealand plane took off on time. I was so tired by this time that I actually slept for several hours.

One thought on “Shanghai”