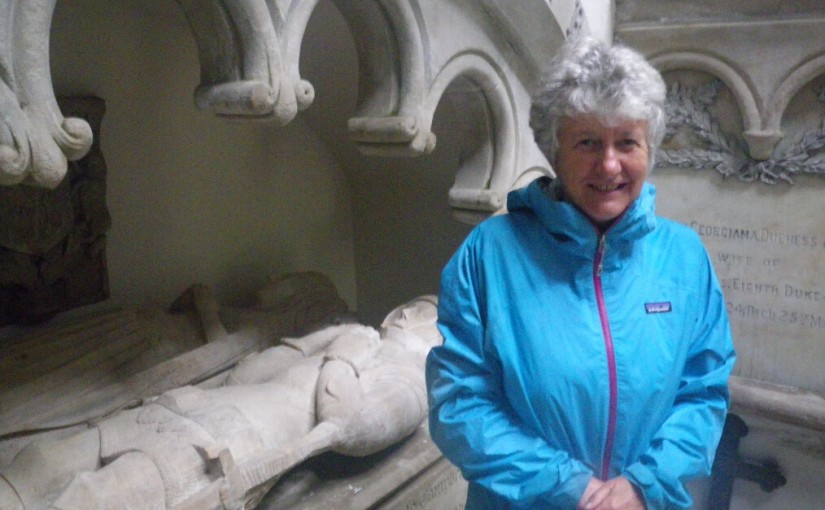 In the village of Kilmun, on the shore of the “Holy Loch”, is St Munn’s Parish Church, which has a mausoleum containing the remains of some of Felicity’s remote ancestors.

Lord Duncan Campbell established a collegiate church in 1442, on the site where the Irish saint Fintan Munnu had settled 900 years before. Campbell paid for eight monks and some choirboys with the deal that they pray regularly for him, his ancestors, and even his descendants.

The remains of the old church are fenced off because the stonework is in dangerous condition. Ivy used to grow over many of the walls, and the roots destroy the mortar. Last winter a section of the wall blew down in a storm, so the fence will remain until funding can be found to effect repairs. Leaning against the wall were a couple of mortsafe grills (photo 11) which used to be locked over new graves to prevent the bodies being stolen.

Ann Galliard, a local historian from Historic Kilmun, met us to unlock the church and act as guide. The first thing she showed us, just inside the front door, was the only working water-powered organ remaining in the UK. A stream flowing down the hill is harnessed to drive an engine which pumps the bellows above it.

Inside the modern church are some fantastically detailed stained-glass windows, made by some of Scotland’s most skilled artists. The church is still used for a service once every three weeks, but the congregation (currently 30) is steadily decreasing, which means maintaining the building is an increasing problem. There is a small visitor’s centre in the entrance which has a collection of metal artworks which used to be left on the top of graves.

Originally the Campbell clan chiefs used to be buried inside the church close to the alter, but when authorities banned this practice a mausoleum was built just outside. As she unlocked the door to let us in, Ann casually remarked that there was a curse placed on anyone who entered, so if any disaster befalls us in the next few days you’ll know why. The room has an interesting domed metal roof that was cast in sections in Glasgow and bolted together on site. Each section still has a label with a number indicating its correct position.

At the end of two rows of coffins are the effigies of Duncan and his wife Marjorie, who was the grand-daughter of Robert the Bruce. The faces are supposed to be very true-to-life. When we were visiting the UK two years ago the mausoleum was having maintenance work done, and the effigies had been taken to Edinburgh for safe-keeping.

We would have liked to have explored the graveyard, where other family members are buried, but it was pouring with rain so we passed up the opportunity. The first ever female doctor is also buried here.

After our visit we took a vehicular ferry across the Firth of Clyde and headed south for England. Not long after we crossed the border the sun came out and the sky turned blue, so now we are enjoying the heatwave they have been experiencing for the last week.

We drove down through the Lake District which is very picturesque. Most of the afternoon has felt like being in a postcard. We will have to come back and explore this area one day.

One thought on “Kilmun”