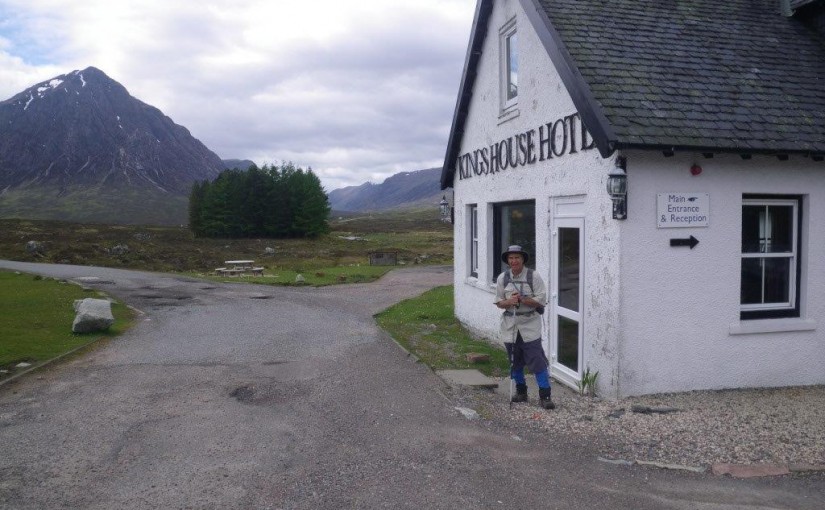 Today we crossed Rannoch Moor, reputedly one of Britain’s wildest, largest and most dangerous.


The first section of trail from the Bridge of Orchy was pretty straightforward, climbing up through pine forest and moorland. We stopped at the summit (nearly 300 metres above sea level!) to admire the view, and to get a passing tourist to take our photo.

The path zig-zagged down the hill to Inveroran, where there is a small pub and not much else. Just out of town is the Victoria Bridge, just before the end of the public road. The Way from here on follows the old drovers road to Glencoe.

While the military roads were made for marching infantry and their officers on horseback, this more modern construction was made for carriages, so it is straighter, less steep, and has much more substantial bridges. Although it was replaced by a modern highway in 1933 it is still mostly in good condition.

At the gate was a faded sign warning us of danger, but about all I could read was “if in doubt turn back now”. The guidebook says “do not stray from the path, as in places you could sink into the peat bog”. The road is very exposed to bad weather, but on a fine day like today I didn’t feel in any danger at all. The biggest risk I could see would be if it snowed – there are no poles or other markers, so even a foot of snow would make all trace of the road disappear.

Near the start of the road we saw several ruined houses, suggesting that once there was a small settlement here. There is still one very flash estate on the edge of Loch Tulla, down a long private driveway.

We strayed slightly from the path (carefully avoiding the bog) to eat lunch in the shelter of a low ridge. The sun was warm, but there was an icy wind blowing down from the snow-covered slopes around us. I looked at the map and figured we must be nearly at Ba Bridge, and as soon as we started walking again we found it was only a hundred metres further on. The Ba river runs through a small gorge cut through red granite.

From here the trail climbed up to another ridge, then descended down into Glen Coe, where the infamous massacre of 1692 took place. Thirty-eight men from Clan MacDonald of Glencoe were killed for failing to pledge allegiance to the new monarchs, William and Mary. Another forty women and children died of exposure after their homes were burned.

On the way down the hill we passed a small ski field, then a pretty white-washed cottage that has obviously been recently restored.

The Kingshouse hotel, where we are staying, was built in the 17th century and used after the Battle of Culloden in 1746 as a barracks for George III’s troops. In 1803 Dorothy Wordsworth wrote:

“Never did I see such a miserable, such a wretched place…the floors far dirtier than an ordinary house could be if it were never washed.”

It seems to have improved somewhat since those days.

The track notes say that in the early morning you may be lucky enough to see deer come down from the hills to scavenge food scraps, but even when we arrived just after 2.00pm there was a stag lurking right outside the front door. I hope there is venison on the menu tonight.