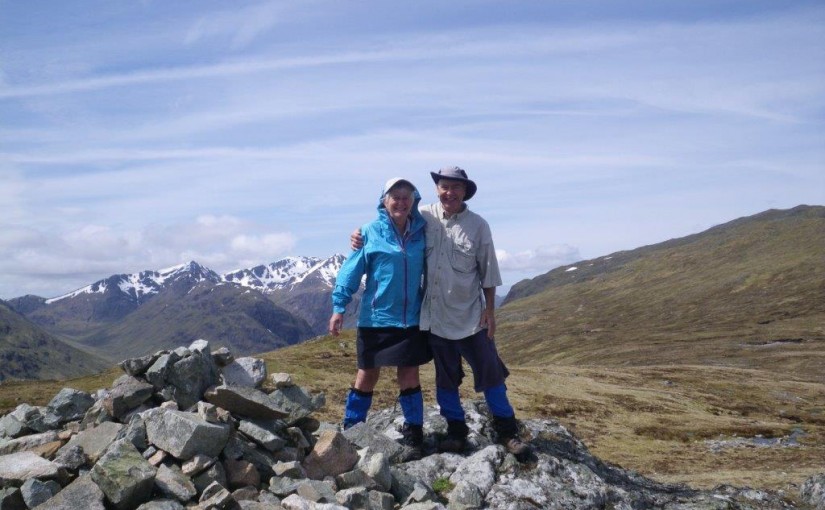 For the first time this (Scottish) summer, I put sunscreen on my nose today. I’ve also been high enough to touch some snow.


The old military road north from Kingshouse rose quite gently at first, but after Altnafeadh it is called the “Devil’s Staircase”, because it zig-zags steadily 850ft up a steep ridge. We met quite a few day walkers, some of whom were struggling a bit, but we plodded up without any distress. We did get overtaken ourselves by a few young, fit athletic types, I have to admit.

At the saddle we paused to get our photo taken, then noticed a few people making a side trip to a nearby peak called Stob Mhic Mhartuin – most of the mountains around here only have Gaelic names. Although it is only 2,320 feet high I could see snow near the top, so we decided to take the opportunity since the weather was so nice.

At the top the view was fantastic. The short photo below is a 360 degree panorama that Felicity made by taking half a dozen photos and stitching them together. We chatted to a couple in their 70s who were just doing a day climb, and the woman took our photo for us.

About a third of the way down we stopped on a flat rock overlooking Blackwater Reservoir to eat lunch. You can see it behind me in photo 8, where I’m standing next to the cairn on the saddle. The dam was built by hand between 1905 and 1909, and at the time was Britain’s largest hydro-electric project. Apparently electricity gets sent down to England during the day, but at night when demand is low water is pumped back uphill to the reservoir so it can be used again.

The military road wound slowly down the hill. Towards the bottom we were in the shade of trees, which was quite pleasant in the midday heat. The town of Kinlochleven used to have an Aluminium smelter which employed many of the men in town, but it closed in 2000, and they seem to be trying to develop the tourist industry instead.

We watched a small group of people hand-paddling small rafts down the river, but they looked pretty sucky to us. When they came to some interesting-looking rapids they stood up and walked – with no paddles to steer with they couldn’t really have any exciting rides.