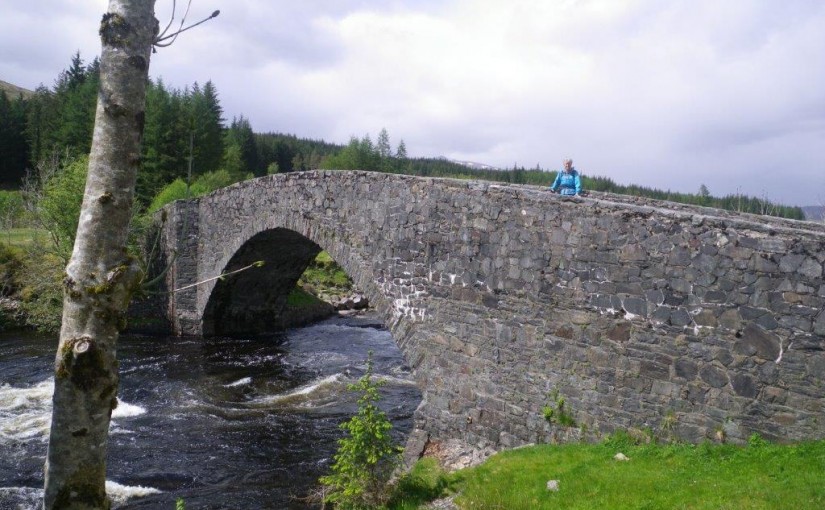 As we ate breakfast this morning the sun was streaming through the window, and we could see that our B&B does indeed have a “hillview” as promised by its name. I briefly put my poncho on as we climbed the hill to re-join the West Highland Way, but it turned out to be a false alarm, as it stayed dry throughout our entire journey.


The first section of the Way lead us along a forested hillside, with the first appearance of heather growing alongside the track. We both enjoyed walking in sunshine for a change, and didn’t mind the cool air temperature.

The path eventually descended towards the river, and we passed under one of the two railway lines, and across a stone bridge that used to carry the road. In the background of the second photo, near the top of the arch, you can just see a truck driving past on the modern highway.

I was intrigued to learn that the river here flows eastwards to join the river Tay, which has the greatest water flow in Britain. This means that we had crossed the central divide of the country into a new watershed, even though we haven’t been very high at any point.

Up on the other side of the valley, we came across the ruined St. Fillan’s Priory, which was established by Robert the Bruce in 1318. The nearby graveyard is supposed to date back to the 8th century, but the gravestones we could read seemed to be only a couple of centuries old at most.

A bit further on we crossed Auchtertyre farm, where we found a crew of workmen erecting a large marquee. They told us that next weekend there is an ultra-marathon along the West Highland way and that over 250 runners will come haring down the trail from Fort William. I’m glad we didn’t pick that date for our walk!

Just before we crossed back over the highway we made a detour to see St. Fillan’s Holy Pool, which was blessed by the saint and reputed to cure insanity. I took a look at the snow-covered hills upstream and decided that I was feeling in excellent mental health. The cure involved ringing a holy bell (now in Edinburgh Museum), and I presume that when the mentally ill were flung in the water and told they could come out when they were better, miraculous cures were pretty much guaranteed!

The next area of note was Dal Righ (king’s field), where Robert the Bruce was defeated in a battle back in 1306. As they ran away, Bruce’s men threw their heavy swords into the tiny Lochan nan Arm (behind me in the photo), where they are thought to remain to this day.

Just before we reached the village of Tyndrum, we crossed a patch of desert-like ground that used to be a lead smelter. The ore was mined in nearby hills and refined here before being transported to Glasgow on donkeys. Although the factory stopped production years ago, the ground is so poisoned that nothing can grow.

As we passed the Tyndrum camping ground, we saw a man in the stream panning for gold. There used to be gold mines up in the hills as well, and every time there is a flood some small specks wash down. I asked if he was making his fortune, but he said he would be lucky to find 3-4 grams a day, which at £25 a gram is hardly worth the effort.

We ate a picnic lunch outside the last shop for the next 43 km, then set off on the final leg. This was mostly along an old military road which meant we could stride along at a good speed. As it was out in the open with no shelter, with the wind in our faces, I was very glad it was sunny.

Our day ended at the Bridge of Orchy, where the old road crosses the river. As there was no accommodation at the hotel, we had to ring for a car to bring us back to Crianlarich where we are spending a second night. Tomorrow morning we get driven back to the bridge to resume our journey.

While we waited for the taxi to arrive we bought a beer to drink on the verandah of the hotel, but just as I was carrying the glasses out to Felicity she came back inside because it had started raining again. It was just a brief shower – the forecast is reasonably good for the next few days.

One thought on “Bridge of Orchy”