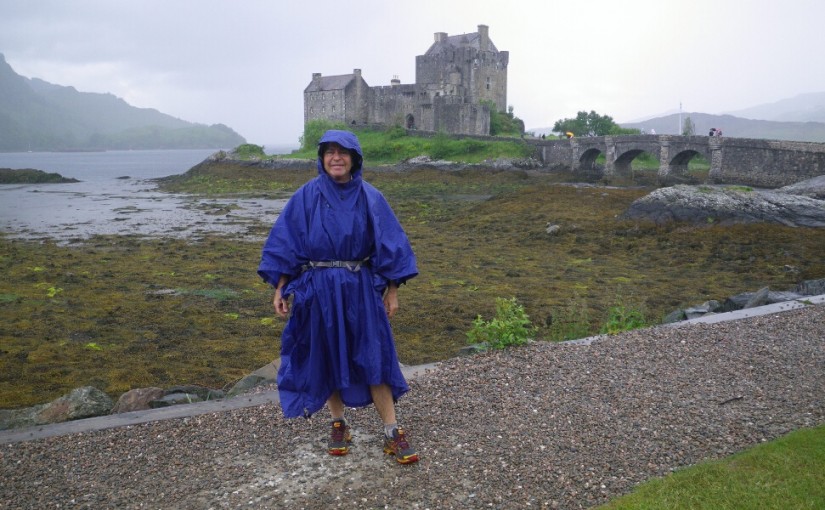 This afternoon we crossed the new Skye Bridge back to the Scottish mainland, and are now parked up for the night on the hill behind Eilean Donan Castle.


We were on the road soon after 8.00am this morning, heading west towards Loch Dunvegan. The castle wasn’t open for visitors, so we settled for a photo and continued along the road.

We parked at the end of a country lane, and walked a couple of kilometres down a track to see one of Skye’s famous coral beaches. As we came to the top of the hill we noticed a seal in the water, then another, and then a couple more. In all there must have been a dozen, and I think they saw us too, because they all stopped just off the beach and lifted their heads out of the water to stare back at us.

The beach isn’t really made of coral, although it looks very much like it. There is a calcium-rich algae called ‘maerl’, in this area which breaks up into hard grains when it dies, just like the real thing. The sea water wasn’t particularly cold, but the lack of sun and the fact that we hadn’t brought towels made us forgo a swim.

After a brief stop at Broadford for diesel we headed down to the south of the island to the village of Elgol. We stopped on the wat at the edge of Loch Slapin to eat lunch, with the rugged Cuillin Hills towering above us.

According to our guide book there is a very large cave in the cliff below Glasnakille, so we followed the directions carefully, through a paddock, past a ruined barn, bearing left towards a gulley below. We stopped an looked down a narrow slot in the rock that we knew we would have to cross at sea-level.

We managed to negotiate a steep, slippery, muddy path without incident, and worked our way around the jagged coastal rocks to the beginning of Spa Canyon. Alas, we had neglected to plan to arrive at dead low tide, which meant our progress was blocked by deep water. I took my shoes off and put my togs on, and waded as far as I could, but I got to a place where I would have had to swim, and had to give up.

This cave was very popular in Victorian times, and you are supposed to be able to see the soot from their candles on the roof. It also used to be filled with stalactites and stalagmites, but they were all taken as souvenirs long ago. I was a briefly surprised that Victorian tourists would go to so much effort to get somewhere, until it occurred to me they would have simply come by boat.

We were mildly disappointed, because we are both quite keen on caves, but the coast was worth exploring, and we feel like we’ve had a pretty good look at Skye in the short time we have available.

Just as we reached the mainland side of the bridge it started raining hard. We were quite keen to have a look at Eilean Donan Castle, as it has been recommended to us by other tourists, so we put on our wet weather gear and bought a ticket.

It was still raining as we walked across the stone bridge to the small island the castle is built on. The place was a ruin for a long time after the Jacobite rebellion, because the English simply sailed up with cannons and bombarded it into submission. Castles within range of the sea were a bit of a liability once canons became widespread.

In the early 20th century, the chief of Clan MacRae who owned the castle decided to re-build it, and spent the next twenty years fixing it up. There are still private apartments where clan members can have holidays. Once a year there is a clan gathering, and the iron portcullis is lowered over the gate – it’s the only working example in the UK. Then a piper plays his bagpipes, and the gate is ceremoniously raised so that they can all fie inside.

The sections that tourists can visit are very interesting, with displays of furniture and historic objects that MacRaes have collected over the years. We were particularly fascinated by the kitchens, which had realistic displays of food and real cooking implements. There are also numerous places where there are spy-holes through the stone walls so that those in the know can watch the public areas. We stayed right until closing time.

We only had to drive a couple of kilometres up the hill behind the castle to find a nice little layby in the forest overlooking Loch Long. It’s nice to see so many trees after the barren island landscape we’ve been in.

One thought on “Dornie, by Kyle”