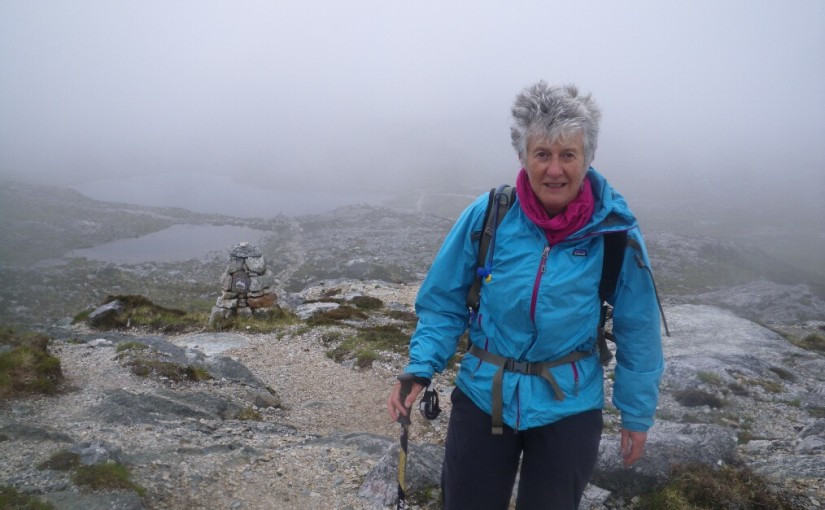 We’ve just returned from a four hour mountain trail in the Beinn Eighe Nature Reserve. At this latitude, for every 300 metres you climb the environment becomes more like that 1000 km north. We’ve just been to 550 metres – the vegetation and temperature equivalent of northern Greenland, far above the Arctic Circle, according to the guide book.


To get here we drove north up the highway for an hour or so. At one point we had to drive through a tunnel that has been built to protect the road and railway from avalanches. We also made short detour to see the ruin of Strome Castle, but there wasn’t anywhere close to park so we didn’t stay long.

After Kishorn we turned off onto the Applecross road. This is a major feat of engineering that passes over a serious mountains to get to the west coast. It is the sort of road you might use to get to a ski field. At the start there was a big sign saying:

“This road is normally impassable in winter conditions. Not suitable for large vehicles or caravans. Not recommended for learner drivers.”

This didn’t worry me, and we hired a small campervan for exactly this reason. I had to pay attention to my driving though. Like many Scottish rural roads it is one lane most of the way, with a wider section every few hundred metres where vehicles can pass. It also had hairpin bends, and steep cliffs dropping dozens of metres to jagged rocks.

Once we reached the coast the road became a bit more normal, as it passed from one small seaside village to another. We stopped at a house that was advertising smoked seafood, and purchased some smoked sea trout.

We had hoped to find a standing stone in the previous village that was marked on the map, but when we asked the shopkeeper if she knew where it was she told us that nobody knew. She also said that when it appeared on the map it caused a big scandal amongst the local Presbyterians, because they thought it might have been used for pagan ceremonies. I suspect they went and tore it down.

We called in at the village of Shieldaig and discovered that the local pub had free wifi. We haven’t had internet access for several days, so we bought a pot of tea and made it last for over an hour while I uploaded blog posts, cleared email, and even managed a couple of small jobs for my clients. We had been watching (and smelling) the other customers eating delicious food so we were pretty hungry by the time we left. We sat in the van on the edge of Loch Shieldaig and enjoyed some smoked sea-trout pate.

After another hour or so driving we were both feeling ready for a bit of exercise, so we stopped at the ‘countryside centre’ in Torridon to ask about local walks. The woman there gave us a brochure about Beinn Eighe, and suggested we continue on and walk there. This is Britain’s oldest nature reserve, and was established in 1951 because of its outstanding wildlife, scenery and geology.

It is unusual to see natural forest transition all the way from sea-level to the snowline in Scotland. Because people have lived here for over 5,000 years (and it’s cold a lot of the time), most of the trees have been chopped down long ago. The Scots pines that stand tall and straight down low grow twisted and deformed a few hundred metres up – a bit like Japanese bonsai trees. Up high the same trees are stunted and short.

The track is pretty rough, but it has had a lot of work done on it. Many of the stone steps were held im place by concrete that someone must have lugged up the hill. Often the smooth rocks had hatched cuts made with a diamond saw to stop them being slippery. There were lots of rock cairns to reassure us we were on the path, and some of them had names that corresponded to a description in the guide.

One of the smooth rocks had a whole lot of circular marks, and the guidebook explained that this is known as pipe or trumpet rock and these were made by worms burrowing into the sandy bottom of a tropical ocean about 500 million years ago. In those days Scotland used to be part of America, at a time when England was far to the south.

It sure isn’t tropical any more. I got all the way to the top in my shorts and light shirt, but the clouds rolled in and the temperature dropped to just what you might expect above the arctic circle. I was very glad that I had bought my gloves along on this trip.

When we got back to the van about 6.30pm, we decided to stay the night here in the carpark on the edge of Loch Maree. A few other campervans have parked near us, so it isn’t particularly private, but the view of the water a couple of metres away is pretty good.