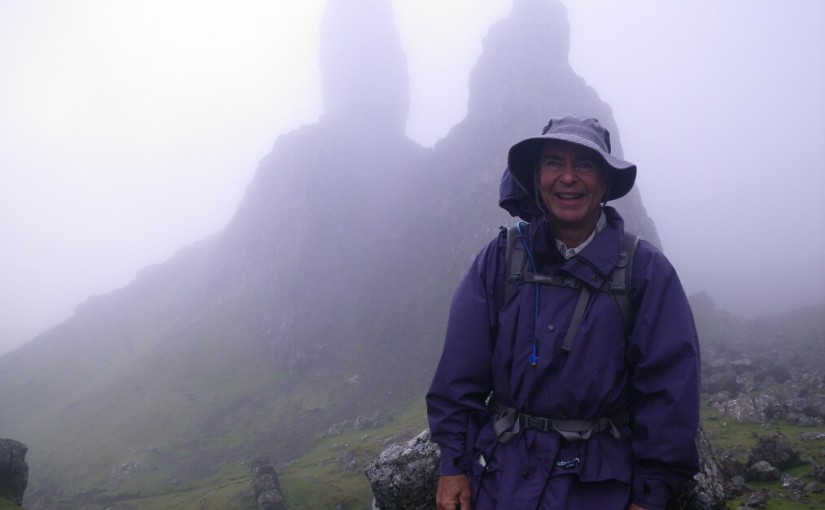 This morning we crossed to the Isle of Skye on Scotland’s last turntable ferry. At the begining of last century there used to be dozens of these small boats around the country, but now they have mostly been replaced with bridges.


This one could take six vehicles, and when the ferry came alongside the dock the crew pushed each corner by hand until it was on an angle that we could drive down. When all the vehicles were loaded they pushed around it until we faced the bow, and on the other side they they turned us again so that we could drive off.

The ride over was very pleasant on the calm water, although apparently there is a 12 knot current that the skipper had to take account of. We watched a couple of seals gamboling in the water beside the boat.

We drove north to Portistree, where we ate lunch parked on the sea shore opposite the fishing port. Then we walked around the coast through a reserve that has been donated and developed by clan Nicholson. We noticed one of the many park benches had been donated by a NZ member of the clan.

Off the shore we could see one of the many salmon farms that dot the Scottish lochs and bays. I have enjoyed smoked salmon a few times when it has been offered with scrambled eggs for breakfast as an alternative to the usual fry-up, but it is not in the same class as our NZ salmon. We kept a sharp lookout for sea eagles, which are known to nest on the cliffs above where we were walking, but we were not in luck.

We enjoyed the many varieties of spring flowers beside the path, which eventually climbed up the hill past sheep paddocks and stands of trees. A lane beside an old stone wall lead us back to a road, and we walked down it to re-join the van.

We drove north some more, stopping at The Old Man of Storr. This is the number one tourist attraction on Skye, so there were dozens of cars, campervans and buses parked on the side of the highway. We looked up at the mountains above us, but could see only cloud. The viewpoint is supposed to be half an hour from the carpark, so after about 40 minutes we were wondering if we had taken the wrong track. There had been one intersection, and we had taken the left fork, assuming it would be a loop in the absence of any signage. Felicity asked an Italian woman who didn’t speak much English, but she muttered something about 50 minutes.

By now the cloud was very thick, and we could only see about 100 metres in any direction. It was also getting quite cold and wet – not raining but it was an extremely damp sort of cloud. We came to the end of the gravel path, but still couldn’t see anything except some rough stone steps in front of us. We kept climbing, higher and higher, still without being able to see anything except steps and stone. Other tourists were a stubbon as we were, so we had company, but we were about to give up when I spotted a dim shape in the clouds above. So we kept climbing until finally, when we were about 50 metres away, we saw a huge bassalt stack of stone reaching high into the sky.

I had been climbing up dressed in shorts and a light shirt, which got me a few odd looks from other tourists dressed in full wet-weather gear. Light clothing is fine when you are exerting yourself, but as soon as I stopped I had to quickly put on my Goretex coat. I wished I had brought my gloves.

There are actually two stacks of stone, and I’m still not sure which is the “Old Man”. They are quite spectacular, and it was well worth all the effort to get up there. In fine weather the formation can be seen from out at sea, and recently when a horde of Viking silver was found buried on the beach below, it was theorised that it must have been used as a landmark.

We both ate a Mars Bar that was given in a catered lunch we bought when on the West Highland Way – we have been carrying them ever since without needing an emergency energy boost. We just about ran down the mountain, because we were now very cold, but reluctant to stop and put on down jackets and wetpants etc. It was quite a relief to get back to the van and turn the heater up full.

Another few miles up the road we stopped to look at Kilt Rock, which is a high sea cliff with layers of rock that look somewhat like a kilt pattern. There is also an impressive waterfall that drops into the sea.

At the next village we drove down a small side road to the wharf, where we brewed a cup of coffee and ate an oat and honney biscuit that we nicked from a B&B a few days back. We decided that the guide book had got it wrong, and that the place we were looking for was on a road leading west from the highway, not east.

A few miles more and we spotted a sign for Quiraing. We drove up a long, narrow road to a saddle on the main divide of the island, then set out on another mountain adventure. By this time it was 6.00pm, and at home we wouldn’t dream of setting out so late, but we know that here it is perfectly light until 11.00pm, and even after that the twilight (or as the locals call it ‘the gloming’) makes it light enough to walk around all through the night.

This trail led along the base of sheer cliffs for a couple of kilometres. There were more bassalt spires above us and interesting rock formations to explore. Felicity had a close encounter with one of Scotland’s black faced sheep. This bit of mountineering was a lot more fun because it wasn’t raining, and we were dressed more appropriately.

By the time we got back to the car it was after 7.30, but I thought it would be good to try and get around the northern tip of the island to the west coast, which would still be in sunshine. We drove for ages, but couldn’t find a good spot anywhere, because other campervans had already snagged anywhere decent. Because the island has so few trees, and a surprising number of houses, it proved difficult to find somewhere discrete.

At 9.00pm we were quite a way south, and starving hungry, so things were starting to get a bit tense. We decided to settle for a commercial campground, which did come with the bonus of a hot shower. It was a very full day.

One thought on “Edinbane, Isle of Skye”