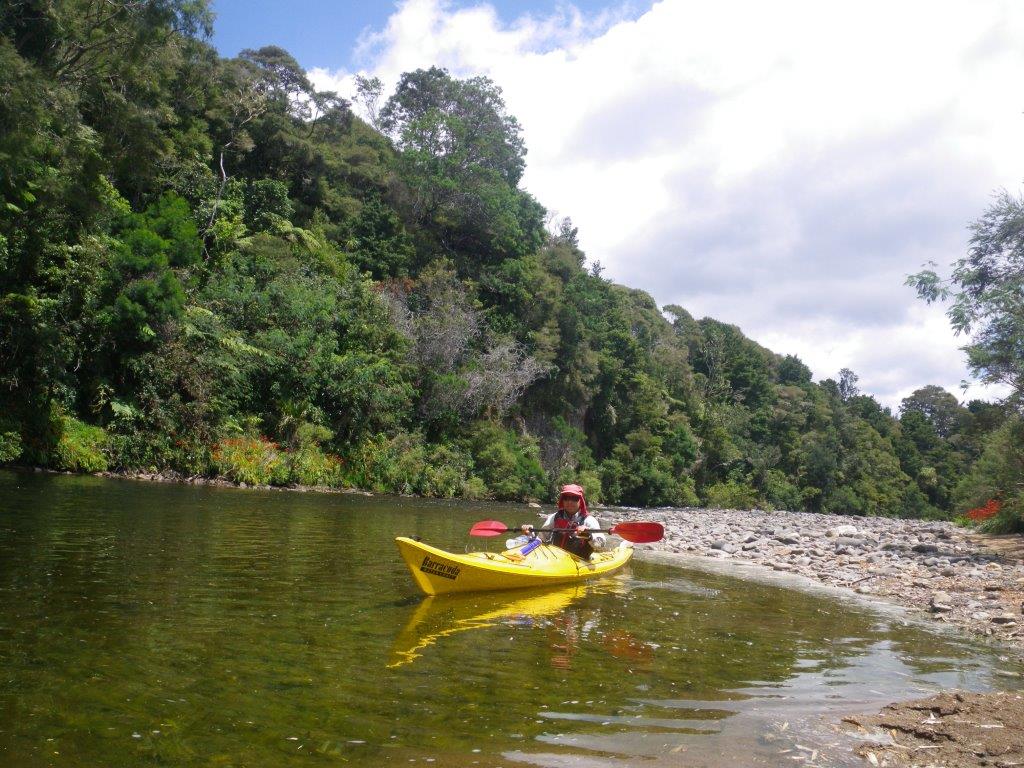 On Sunday the wind was forecast to be a bit stronger than the day before, so we thought about kayaking from the Ferry Landing at Cooks Beach into Whitianga Harbour. One look at the choppy current rushing past the wharf made us think again, and we decided to head further inland and have a play in the Waiwawa River.


Next to the highway bridge at Coroglen we found a nice spot to launch our boats, and we paddled upstream with the incoming tide. For just a few hundred metres, until we came to a small, stony rapid that seemed to be the limit of the tidal zone. We got out and dragged the kayaks over the stones, which were slippery with didimo (aka “rock snot”). Then another few hundred metres paddling, another rapid, etc., etc.

Although the river is surrounded by farmland, there are high trees along the entire bank so we felt like it was quite remote. One long section was lined with bamboo, and I kept half expecting to see monkeys or some other exotic animals that one might find on a similar river in Asia.

After about an hour or so we decided we had had enough, so we found a secluded beach and enjoyed a naked swim in one of the larger pools. After drying in the sun on the smooth rocks we ate our lunch and set of down river again.

This was a lot more fun, because by paddling hard at the top of each rapid the force of the water was enough to push us over the shallow parts. This is one of the big advantages of plastic hulls. We got back to the van in about quarter the time it had taken us to get upstream.

I was keen to keep paddling a bit longer, so I headed further down for another kilometre or so. Felicity soon decided to stop and wait, so after a short while I turned around and we both headed back to the van.