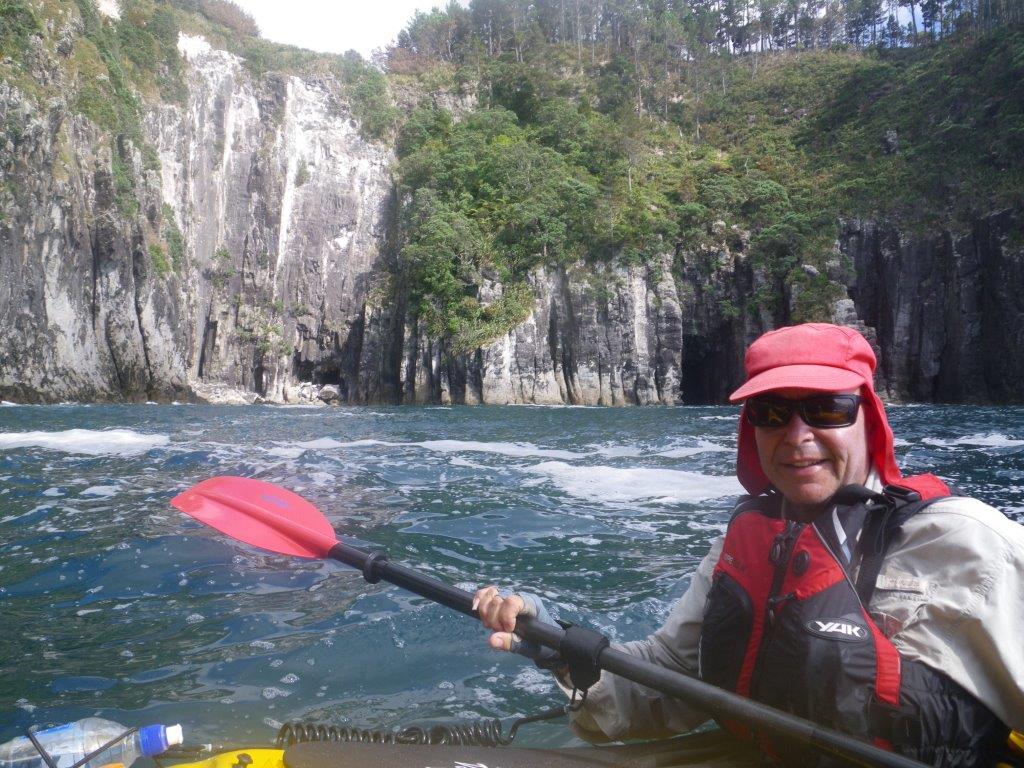 Commercial kayak tours south of Hauhei are promoted as “remote coast”, and only leave in the mornings before the wind gets up. We were on the beach ready to go soon after 8.30 am, so we had a chance to talk to the tour guide before any of his customers arrived. He told us to beware of hidden reefs, and to check out caves carefully before paddling inside. Most importantly, he drew a map on the sand to show us where to find the ‘blow hole’.


Although the water was fairly calm in the still morning air, there was quite a big swell which meant that the beach had sizeable waves breaking. I wondered if I would manage to launch myself without mishap. I helped fit Felicity’s spray skirt, then gave her a push out, but before she could get her rudder down a wave caught her and she tipped sideways. As I am usually the one who falls out this made me even more nervous.

We hauled her kayak back up the beach and emptied out the water. She had lost her drinking water bottle, but fortunately a spectator had seen it floating and handed it back. The tour guide took pity on us and gave her another push that was probably better timed than mine, then gave me one too, so I was able to set off without incident.

The sea in the photos looks a lot calmer than it did from our boats – the swell isn’t really an issue when you are safely clear of the shore because you just bob up and down, but when we were near rocks the waves crashed rather alarmingly.

I’m glad the guide had told us where to find the entrance to the blow hole because I would probably not have dared paddle into such a small cave without his advice. I sat outside for a while nervously until I noticed a glimmer of light inside, and that gave me the confidence to head in. After a few metres it opened out into a calm pool with plenty of room to turn around, and even a rocky beach that we could have landed on had we wished. Above us was an almost circular hole surrounded by trees, with the light filtering in. We were both reminded of the limestone ‘hongs’ that we have visited in Thailand.

After a bit of a rest we paddled back out and continued along the spectacular coast. Another big sea cave looked safe enough to paddle into, and sure enough the water inside was fairly calm. I even dared to get my non waterproof camera out and get a shot of Felicity.

Around the next headland we saw Hot Water Beach. There were even bigger waves breaking here, but I convinced myself that the very northern corner where the creek empties out was slightly sheltered and I headed in. There were only about half a dozen people to witness any disaster, and when a wave started turning me sideways I thought they were going to be in luck, but I managed to dig my paddle in just in time, and got to the beach without turning over.

Felicity followed me in successfully, so we enjoyed a swim and a stretch in the sun, then sat under a pohutukawa tree and ate an early lunch.

I was rather nervous departing on my own – I managed to push Felicity out through the breakers OK, but I had to leave without my spray skirt fixed and without being able to drop the rudder. I paddled furiously, and tried to stop paddling and pull the rope to get the rudder in the water, but a big wave started turning me and I had to do some more desperate paddling to stay safely head on. As each wave passed under me the front of my kayak smashed down onto the water with a crash, but only a couple of litres came inside.

It was quite a relief to finally get out far enough to get the rudder down and my spray skirt fitted onto the cockpit!

The trip back was only just within our comfort zone. The wind had started to pick up as advertised, and by now there were lots of tourist boats zooming past us leaving behind wakes that we had to turn into so they didn’t tip us out. In some of the narrow channels between the mainland and small islands the swell coming in from the open sea had an echo bouncing off the rocks and so waves seemed to be coming from all directions.

In the middle of the day the beach at Hauhei was crowded with families enjoying the sunshine, so if either of us had fallen out we would have had a huge audience. But we both surfed in professionally and our mission was over.

We were delighted to find that there was another space available at the Cathedral Cove car-park, so we staked our claim then took our snorkelling gear down to Gemstone Bay. Sadly there were almost a dozen fizz-boats moored in and around the snorkel trail, which meant that our swim was constantly being disturbed by kids hurtling into the water. The water was fairly murky, but I managed to spot a couple of sting rays, about half a dozen small snapper, a red moki, and a few smaller species.