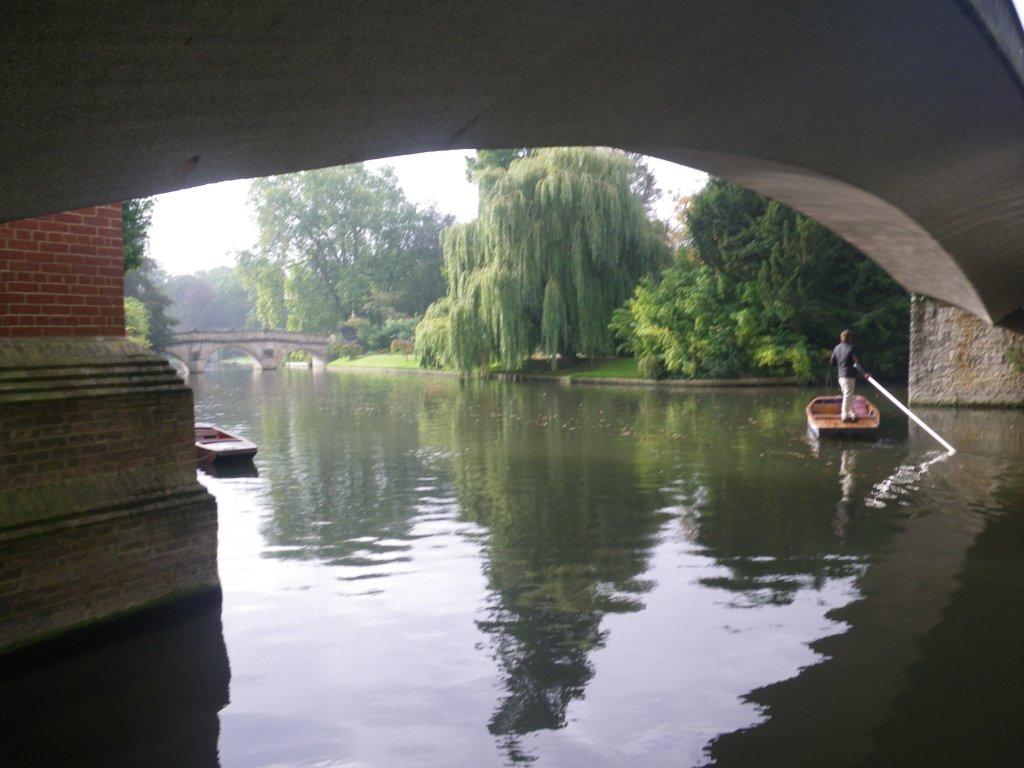 Felicity had a meeting today with someone at the university here, so we are staying a couple of nights.

Cambridge was started in 1209 following a dispute at Oxford. It is the third oldest university in the world (Bologna is the oldest). The town is the first I’ve seen that probably has more bikes than cars, probably because there is nowhere to park in the university area. Only about one in ten riders wear a helmet, and about two out of ten don’t bother with lights on the road at night, which seems rather foolhardy to me.

Our first impression from the train was that it was a typical modern English town, but when we walked into the central part we quickly realised that it is unique. There are 31 separate privately owned colleges, and each one has a separate campus, usually behind high walls with a decorative gate. Many allow tourists to wander around during the day, sometimes for free, but some charge an entry fee.

We tried to march through the door of one so that we could walk along the river, but a porter was quickly on to us and turned us back. The colleges which the river runs through often have their own private bridge. If we had hired a punt we could probably have passed through, but punting looks like a lot of effort compared to paddling a kayak.

Yesterday evening we went for dinner at a fish restaurant in a building that is obviously very old. The ceilings were so low that guys over about 2 metres had to duck under the beams. One very tall chap had to bend his head all the time! Not a good place to get drunk in. They have removed as many of the internal walls as they could, leaving behind lots of large pillars to hold up the second story. Most of the remaining surfaces were tiled, but where they had left framework exposed we could see that the oak posts and studs had only been roughly squared with a hand adze.

This morning we were allowed to explore inside Christ College, which has the distinction of having educated Charles Darwin. The “Fellows garden” behind the second courtyard is huge considering it is right in the centre of town. It even has a swimming pool.

The building with the domed ceiling is Lloyds Bank. This used to be called Fosters Bank, and was built back in 1889.

While Felicity was working, I walked along the river heading out if town, following small paths past allotments,  playing fields, and behind private houses. When I finally reached the neighboring town of Trumpington, I got out my tablet to check Google maps and spotted a place named Grantchester Meadows.

That triggered a bit of a flashback to the early 70’s when I used to enjoy the song of that name on Pink Floyd’s album Ummagumma. I couldn’t resist checking it out, so I hiked along some small country roads through the attractive English countryside till I came to the village of Grantchester. Apparently this area has the highest concentration of Nobel Prize winners in the world, because of all the retired Cambridge academics. According to a sign, Lord Byron used to swim in a pool here.

There are several very old looking pubs, one with a thatched roof. Lots of the cottages look like they were built centuries ago. The meadows themselves were basically cow paddocks beside the Cam river, very pretty but nothing special. I listened hard for a skylark, but it must have been the wrong time of year or day.

The path took me back to Cambridge, where I bought a salad for lunch at Marks and Spencers, then crossed the railway over a long, covered pedestrian and bike bridge heading towards the suburb of Cherry Hinton. I can only say that this area was extremely suburban,  apart from a large park that I was walking around when Felicity rang to say she was heading back to the B&B. As I finished the conversation,  I realised that I was beside a grape vine, and sure enough it was loaded with grapes. Because there were so many leaves, the ripe bunches had not got quite enough sun, and as they have been rained on a few times some of the grapes were starting to rot. But I still got to eat quite a few.

After an hour’s rest and a coffee, the two of us walked back into town to look for a restaurant that offered something other than fish & chips, burgers or pizza. We settled on a Spanish tapas bar, which was very enjoyable.