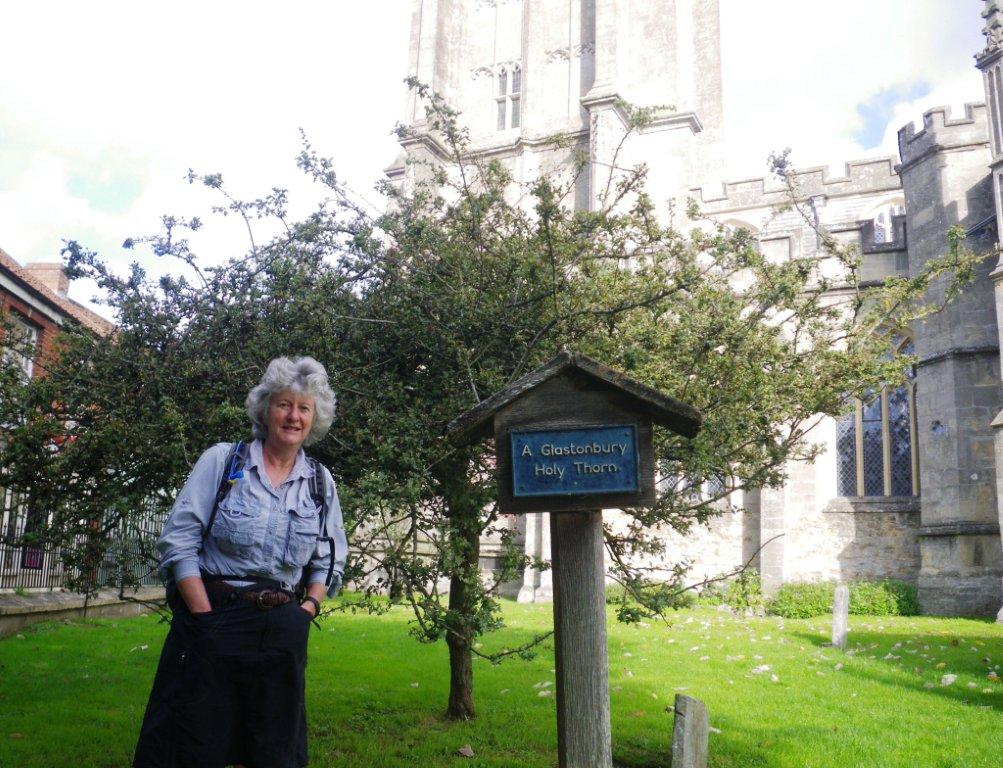 Although we haven’t been far out of town, our focus today has mostly been on the region around Glastonbury.

After I posted yesterday’s blog, and admired the sunset from our bedroom window, we walked back into the high street for dinner and settled on the George and Pilgrims Hotel. There are several quite interesting looking restaurants, but this pub won us over because of its ambiance.  It has been a hostel for pilgrims for many centuries,  and was rebuilt in its present form between 1455 and 1475. The timber structure doesn’t use nails; every piece slots into its neighbour and is held together with wooden pegs.

The arched doorway used to allow carriages to be driven right inside, so the layout is narrow rooms alongside a central hall. A suit of armour left behind by a forgetful knight is still on display.  We enjoyed the food and atmosphere so much we are planning to return tonight. Their speciality is pie, which is not normally what I would order at a restaurant,  but which is quite likely what diners 500 years ago would have eaten. All the way home we enjoyed a serenade of bells from one of the churches.

Our first stop this morning was the Tribunal building which is an attractive 15th century townhouse. It also houses the Lake Village Museum, which records the life of the earliest known inhabitants of this area. In 1910 a medical student saw pictures of iron age settlements on lakes in Switzerland,  and realised that the environment here would have been very similar. Two thousand years ago the Somerset levels were a shallow inlet from the sea, with islands and low lying clay banks here and there. He searched around until he found some low mounds in a field, then started excavating.

He found an entire village built in the swamp around 200 BC. Logs were laid over the soft ground, then layers of brushwood, stones and finally clay were placed on top. These needed to be renewed periodically as the artificial island sank into the soft foundation. He found the remains of dozens of circular houses 6 to 9 metres in diameter,  with a stone hearth in the centre of each. There were also numerous artefacts preserved in the mud, many of which are on display in the museum. The people travelled by canoe; we saw the remains of one carved from a single piece of oak that could have carried three adults. The lake dwellers lived fairly well, with plentiful fish and birds, plus whatever animals and crops they could grow on the dryer islands. They were probably quite safe as well, since attackers couldn’t arrive by horse or large boat. They didn’t actually smelt iron from ore, but they did have forges for making tools and other implements. The range of objects found indicate that there were trade links throughout the UK and even to France.

Our next destination was St John’s Church which has a healthy specimen of the Glastonbury Thorn growing in the churchyard. There is a long tradition that every Christmas, a flowering sprig is cut by a child from the local school and sent to the Queen to decorate her breakfast table. The inside of the church has a lot of artwork, including a controversial painting of the infant Jesus naked, stepping on a snake. There is also a collection of ancient chained books, dating from when Henry 8th ordered that every church must display a bible in English so that all people could read it without having to know Latin or consult a priest.

We learned there is a story that Jesus visited Glastonbury with Joseph of Arimathea as a child, and that this is what the line in Blake’s hymn Jerusalem refers to: “and did those feet in ancient times, walk upon England’s mountains green?” This place has sure made a good business from various myths and legends.

In the centre of town, almost invisible behind shops and houses, is the remains of the famous Glastonbury Abbey. This claims to be where Christianity was first established in England, and has long been a place of pilgrimage for the faithful. There have been many churches on the site over the years, and at its peak it was the largest and wealthiest abbey in the country. Now it is mostly ruins, apart from the intact Abbot’s Kitchen, which unfortunately was being renovated so we couldn’t look around. While the monks had a very limited vegetarian diet, it seems the abbot did a lot of entertaining and got to eat fish, poultry, and game. At one stage the abbey underwent a financial crisis, whereupon some enterprising monk ‘discovered’ the graves of King Arthur and Queen Guinevere, which promptly revived the local tourist industry and the abbey’s fortunes.

Just outside the abbey, the former St Margaret Church great hall (minus its roof) was converted into two rows of tiny almshouses for poor men in the 16th century. In the early 20th century it was decided that they were too small and one row was demolished, but the surviving row was saved for tourists to visit in the nick of time. I couldn’t help thinking that it would be a lot better than living under a bridge, or even in a caravan.

We had read in a guidebook that the White Spring well (across the road from the Chalice Well), is open on Friday afternoons, so we stopped off to check it out. There were a few people waiting for the custodian, who turned up half an hour late looking as if she was in the midst of an emotional breakdown of some kind. From the road it looks like a stone shed, but when we went inside it opened into three large subterranean rooms, with water gushing into a pool in one corner. It tasted a lot nicer than the Chalice Well, so I can see why this is the spring that got piped to the abbey. The custodian started lighting heaps of candles, and we could tell by the various alters about the place that it must be very sacred, so Felicity snapped a couple of photos before the didgeredoo player got started. She was immediately reprimanded by the custodian, so we left quickly before our presence polluted the atmosphere any further.

Our final destination for the day was the Somerset Rural Life Museum, situated in an old stone barn which is one of several that belonged to the abbey. This is by far the flashest barn I have ever seen. It used to be a busy place, with local farmers delivering their tithes to the church. The small square holes in the walls are to allow ventilation so that the stored grain and produce didn’t spoil.

Inside the museum was a fascinating display of rural life in Victorian times. There is an intact farmhouse kitchen with essential 19th century implements like sugar cutters, linnen press, butter churns, etc. In the old stables was a display of traditional industries such as peat extraction, willow weaving, cheese making (Chedder is just down the road), apple cider brewing, and mud horse fishing. The last technique involves pushing a wooden sled out across the estuary to a line of permanent nets to harvest small fish and shrimp. This industry has nearly died out, supposedly because of a nearby nuclear power plant.

Outside they have some rare breeds of chickens and sheep, and most interesting to me an orchard with 20 heritage apple varieties. I haven’t heard of any of them before. Most would have been grown for cider making, but some were good to eat. In the old days farm labourers expected a generous supply of cider in addition to their wages, and if your brew was not up to scratch it would be hard to get enough help.