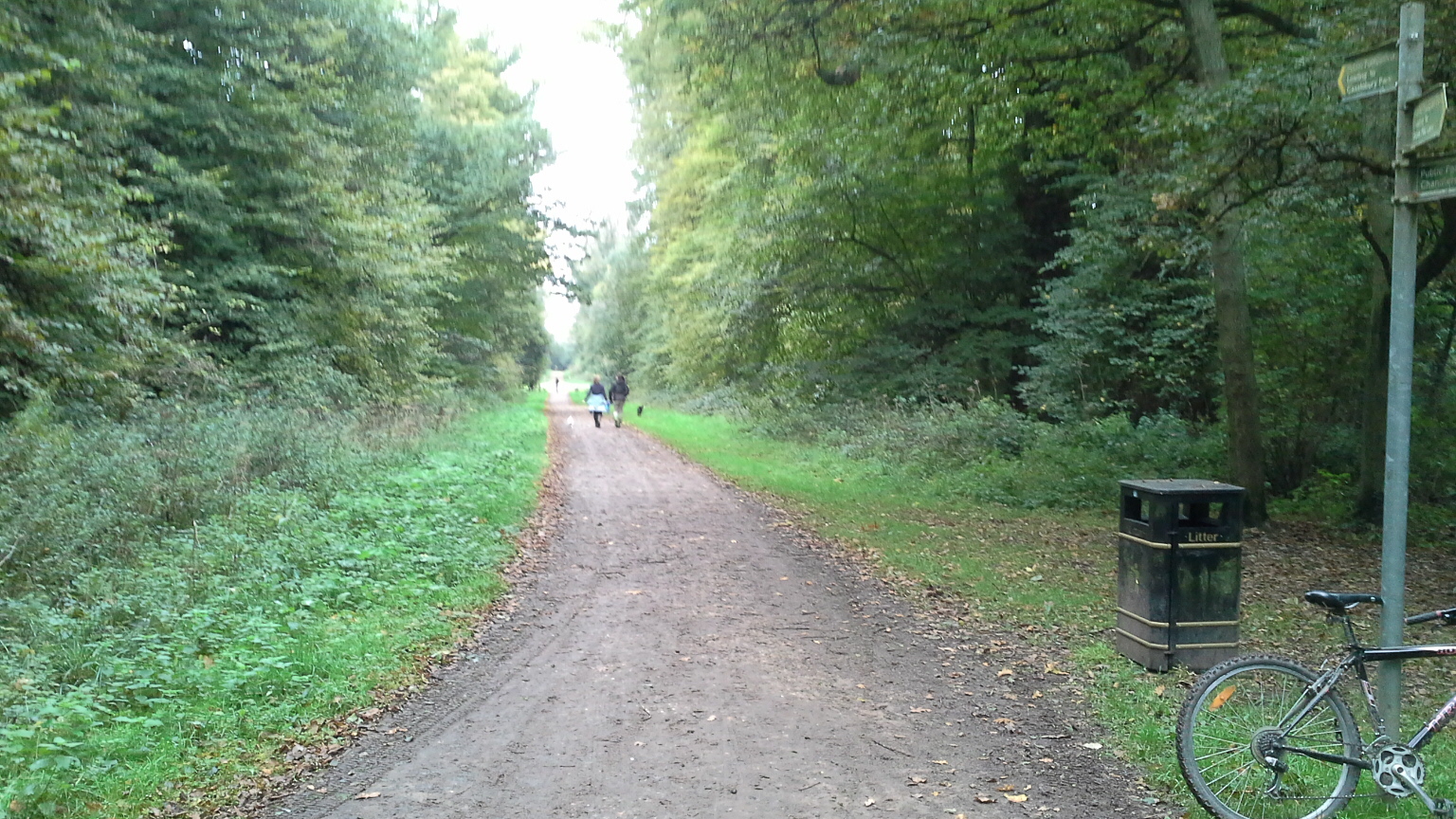 The bike and I have been out at Watford today, enjoying a bit of forest riding.

The road from the station towards Rickmansworth was a bit too motorway-like for my comfort, so I rode out of town mostly on the footpath, illegally. On my way back I discovered a nice safe bike lane marked on the other side!

I made my way to Cassiobury Park, which used to be the home of the Earls of Essex until a bit over 100 years ago. There is a shared path marked about two thirds of the way through the park towards the canal tow path, but then suddenly you come to “no cycling” signs. I had looked at the park website before I left home and it says that the lack of a connection is “bizarre”,  and that most people ignore the signs, so I did too.

Just before the Grand Union canal is a rustic bridge, with interesting carvings of plants and animals. I crossed over the canal and headed into the woods on the far side. The path crosses a golf course, so there were several signs advising walkers to stop at the edge of the trees and look for golfers. Since I was wearing my trusty helmet I just rode as fast as I  could and hoped for the best.

After some more woods the path crossed a small lane, and the next section led over a recently ploughed field. This is hard to imagine in NZ. On the far side I checked out Dell Wood then Waterdell Spring before stopping to check my map. I couldn’t resist riding to Merlin’s Wood, but sadly there was no sign of the fellow.

Across another lane I came to the relatively large Whippendell Wood, which has a horse trail marked around the perimeter. I soon spotted some mountain bike tracks leading down a promising looking path, so I followed them for the next 40 minutes. It was a great ride, except for being infested with stinging nettles which I was able to ignore in the excitement but which are making my lower legs a bit painful now. When I finally hit a road again I checked my GPS and found I had somehow crossed the path I had used to enter the woods without noticing, and was back near the canal a mile or so south.

I rode down the towpath for a while until I reached the Rickmansworth to Watford road again, where I crossed to the east side of the canal and followed the river Gade and some private fishing ponds back towards town.

I needed to buy some lunch, so I rode into Watford looking for a shop, and ended up right back in the centre near the station before I found somewhere suitable. Without a lock for the bike I don’t dare let it out if my sight, or it is likely to vanish.

On the way back to Cassiobury Park I discovered the bikeway, and a series of underpasses that avoided the nerve-wracking road crossings. I chose a different route through the wood, along an avenue of Lime trees planted in 1672. These are not the kind of lime that bears fruit; another name for these large trees is Linden. This is the photo with the two women walking dogs and a cyclist disappearing into the distance.

I made another big loop along the forest tracks, and discovered a couple of big dips, which the website calls dells and speculates might have been bomb craters. Fun to ride through.

By now it was getting near time to head back to the train so that I could get home before the 4PM cut-off. I stopped to take one last photo of the autumn trees, which are starting to drop their leaves. It sure will be a different place when they are all bare.

I think it must be time to fly south for the winter.

One thought on “Watford and Whipendell Wood”