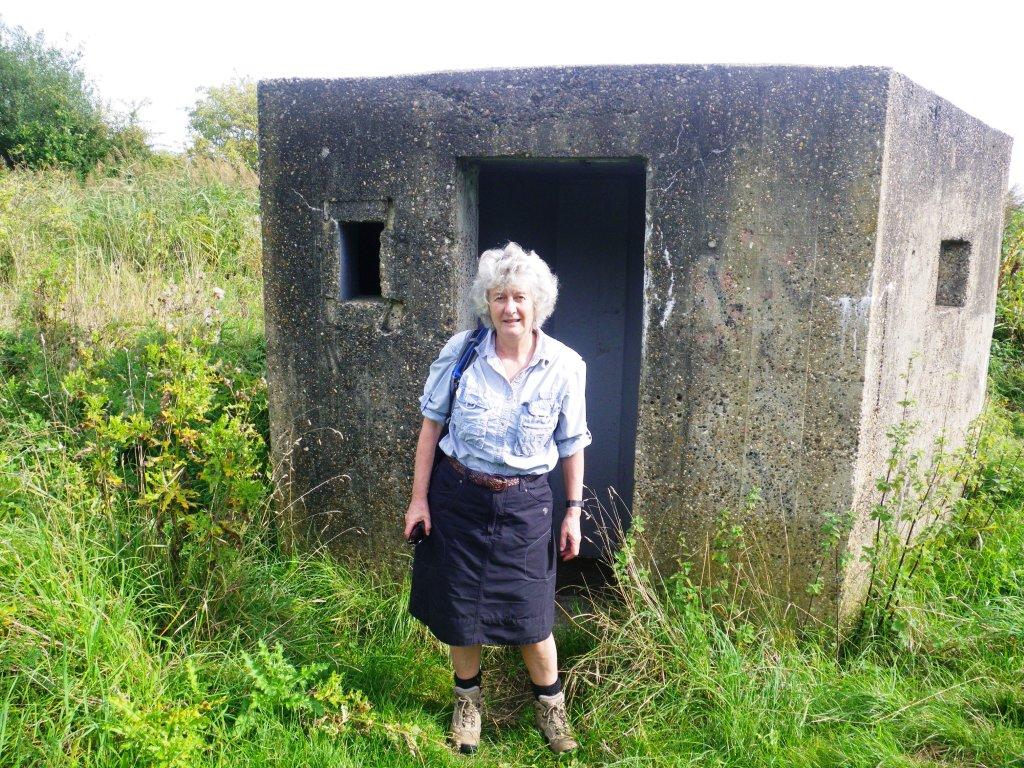 The London Loop walk is a 245 Km trail around the outskirts of the city. We have walked along parts of it on previous expeditions, and today we walked the final two sections, totalling 16.5 Km.

It took over an hour on the train to get to Upminster Bridge, which is almost at the eastern end of the District Line. A few hundred metres from the station we found the Hornchurch Stadium and were soon following a tree-lined path beside the Ingrebourne river. We spotted a concrete bunker and some old gun-emplacements that told us we were passing the site of an old WW2 airstrip, long abandoned. The area has since been used as a quarry and a rubbish dump, but was acquired by the council in the 1980s as a nature reserve.

The trail passed some pretty lakes in the Hornchurch Country Park,  where we saw a man installed in a comfortable tent. At first I thought he might be a fanatical bird watcher, but then I noticed a fishing rod protruding out over the water. We came to a mountain bike track which crossed the road, but it was an expensively engineered circuit for beginners, and only a kilometre or so around, so I won’t be going back with my bike.

As we neared Rainham, we had to negotiate a series of busy roundabouts before we reached the attractive town centre. We then had to wait for ages at one of the few level crossings I have seen in London, because a train was stopped at the station nearby.

The gates finally opened, and we started out across the Rainham marshes. This is another wilderness area that was extensively used during the war. There were thousands of troops camped there, and several firing ranges where they learned to shoot.

When we eventually arrived at the edge of the Thames, we saw a collection of dead concrete barges that were constructed in the hundreds for the D-day landings. These ones presumably didn’t get used, as it seems unlikely they would have towed them all the way back from France.

The path along the big river was interesting, except a bit stinky due to a monstrous rubbish dump nearby. We found a whole lot of wild silver beet which Felicity wanted to harvest, but I talked her out of it by wondering what nasty substances might be leeching out of the landfill. We stopped to look down stream at the huge Queen Elizabeth II bridge.

After the dump we walked along a floodbank that was built in the 17th century to reclaim an area of salt flats so that cattle could be grazed there. A river was diverted so that it flowed into the Thames several miles upstream from its former course, leaving an unusable wharf a mile or so inland from the water. This part of the marsh was bought from the Ministry of Defence in 2000 by the Royal Society for the Protection of Birds, so now it is an important nature reserve.

Before long we were at Purfleet. This was where the East India Company ships departed from, and more recently where all the British military’s gunpowder was stored in five big warehouses. Only the one in the photo is still standing. Because of the danger of sparks there was no lighting allowed in these buildings; huge polished copper sheets were used to reflect sunlight instead.

We were far from the tube by now, but there was a mainline station where we could catch a fast train back to Fenchurch St station in the city, just in time to join the rush-hour crowds going home from work.

One thought on “Upminster to Purfleet”