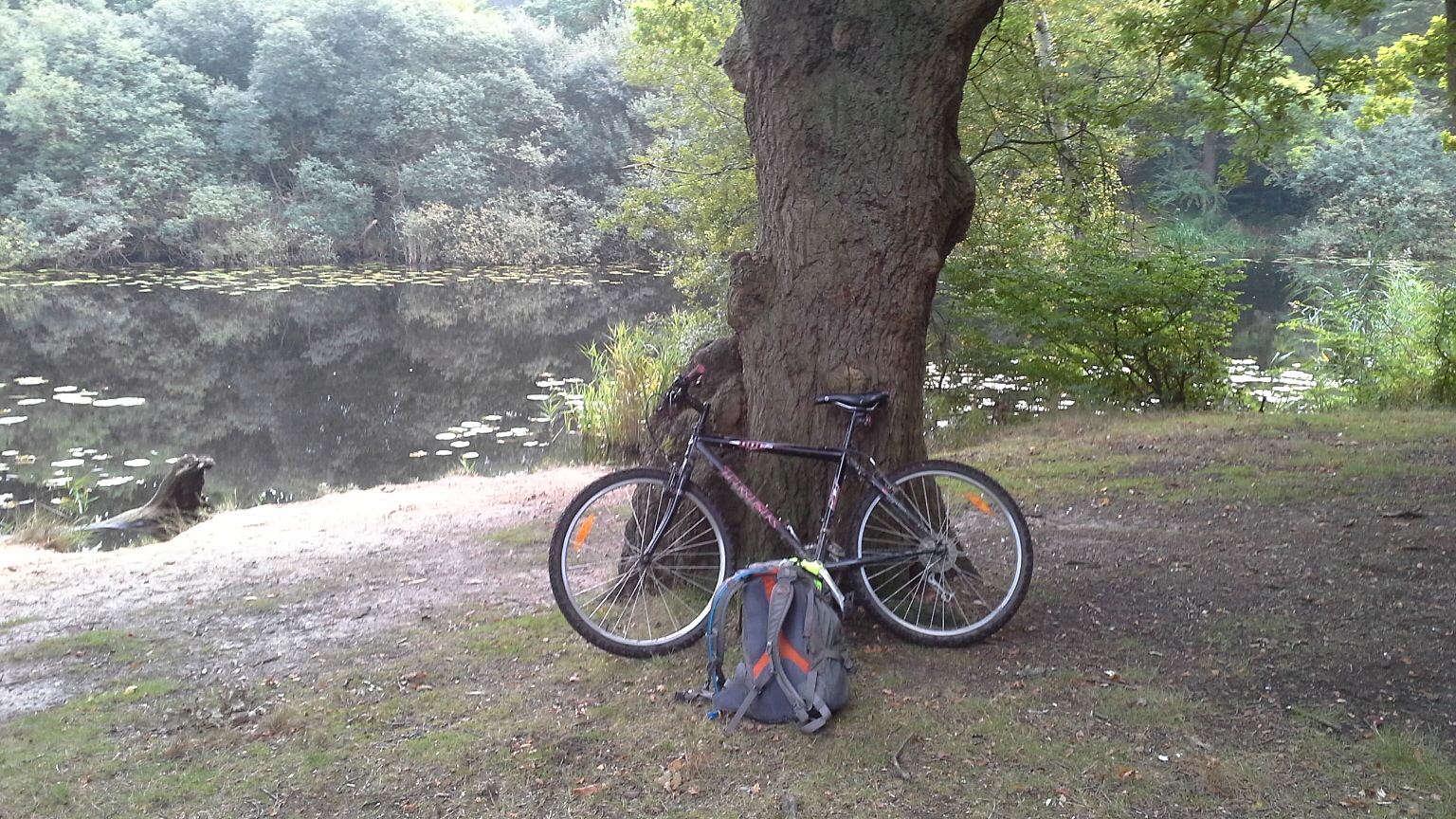 Today I finally got to ride some decent singletrack on my bike. It was a bit of a mission getting there but well worth the effort.

I caught the overground train from West Hampstead at about 9.50, feeling a bit guilty about being 10 minutes before the permitted time for travelling with a bike because the carriage was quite full. The easiest route would have been to go all the way to Stratford and change onto the Central underground line, but that doesn’t allow bikes until the next station at Leyton, several miles away along busy roads. Clearly a professional transport planner has been at work.

By changing at Gospel Oak to a second overland line heading to Barking, I figured I could get off at Leytonstone High Road, then ride less than a mile along relatively quiet roads to the Leytonstone underground station. This plan worked OK, which meant that I disembarked at Theydon Boise just after 11, raring to go.

Epping Forest is quite narrow, situated on a ridge between the Lee and Ching river valleys. A highway runs along the top of the ridge, and several other roads run across at various points, so it is not exactly remote. Within the forest there are also a number of minor roads, metalled walkways and bridal trails. As is common in the UK, there are also several pubs, tea-rooms, food stalls and roving icecream vans.

Despite all this civilization, most of the biking descriptions I read advise you to go with someone who knows their way around, or at least to carry a GPS device to prevent getting lost. There are no mountain-biking maps because when they used to be posted online the haters would go and roll logs and other obstructions across the trails. The ground is mostly clay, which means it doesn’t drain well, so it must be hellish in the winter. The London Council won’t allow any trail construction of any kind, so the boggy sections just get wider and wider as the track expands to avoid them.

This actually worked to my advantage. Even though it has been an incredibly long, dry summer, there were a couple of day’s rain while we were in Scotland, so I was able to follow sections of single track by navigating from puddle to puddle. I found it a bit challenging riding over the rooty bits with no suspension, and I’m still not completely used to riding without having my feet clipped to the pedals. But it was a lot of fun, with enough longish flowy sections to give me some thrills.

I didn’t take many photos, because just about the only time I had my tablet out was the boring bits when I hit a road and had to decide which direction to head in.

One interesting place I did photograph was Ambresbury Banks, the remains of an iron age hill fort built in about 700 BC, and occupied until Roman times. Legend has it that this was where Boudica made her last stand in 61 AD , and where the Romans killed her in revenge for her sacking London. The clay bank used to be several metres high, with a ditch in front of it. It enclosed an area of over 11 acres. Although everything is covered in dense forest now, the surrounding area would have been clear when it was a defensive position. The sign says no cycling, so I didn’t explore.

The second photo is at the Wake Valley Pond. This was man-made when the highway just out of sight in the background dammed up a stream. It is the largest, deepest body of water in the forest. When the highway was a cart track back in the olden days, a wagon belonging to a local brewery ran off the road, and passers-by all heroically rushed to save as much of the load of barrels as they could.

By about 2 PM I was getting tired, and a bit concerned about getting my bike home before the 4 PM curfew, so I headed out of the forest to Loughton and caught the tube heading south. This train was almost empty, so I decided to ignore the regulations and continue all the way to Stratford, from where the overground would take me all the way home.

I arrived desperate for a cup of tea, to discover that our flat door had been deadlocked while I was away. I have a key, but it was inside beside my bed. I rang Felicity, and discovered that she was only 5 minutes away, but unfortunately her deadlock key was inside as well. We ended up having to wait almost an hour for our downstairs neighbour (who has a spare key) to come home and let us in. It turned out that the rental agency had given their key to a plumber doing a mandatory gas inspection, and he failed to follow the procedure of leaving the locks in the state he found them. Both Felicity and I will be carrying all our keys from now on!

One thought on “Epping Forest”