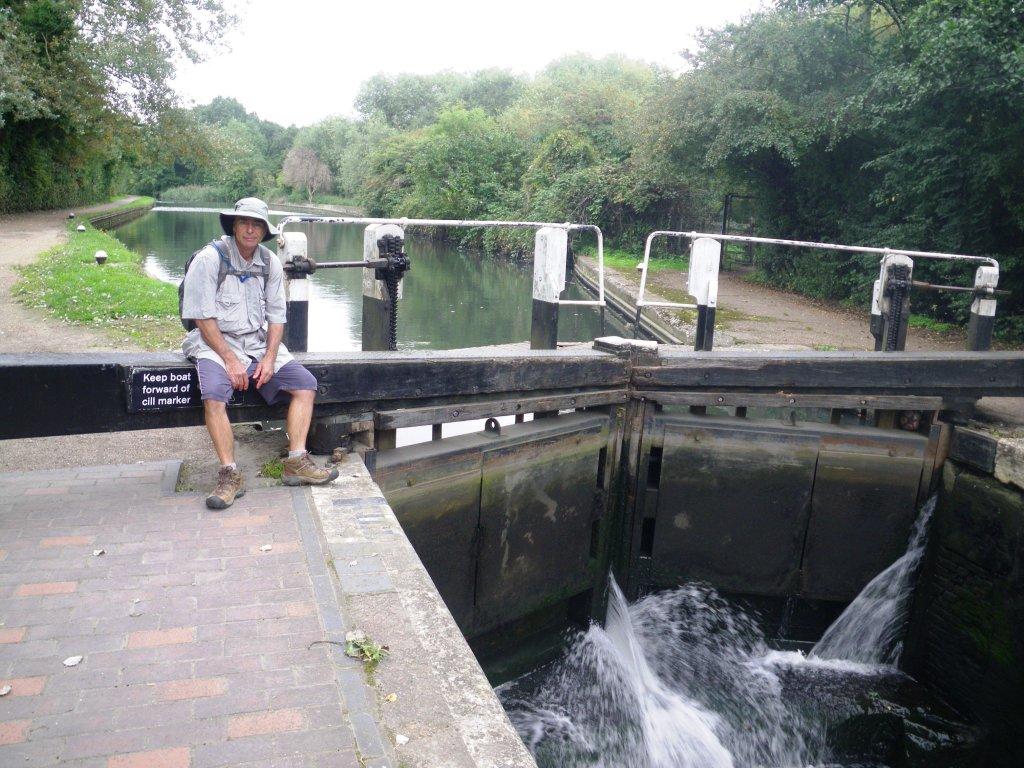 We started today’s walk later than usual, because we wanted to visit a farmer’s market just up the road that starts at 10 AM. Farmers in West Hampstead obviously enjoy an easy life.

Most of our purchases were exotic vegetables, apart from a loaf of very solid rye bread, with no carraway 🙂 and a pastry to share at lunch. The purple tomatoes tasted fine in my sandwich, but I don’t believe I would be able to identify the purpleness with my eyes closed.

We took the train to Richmond, crossed the footbridge over the lock,  then followed the Thames path eastwards. The riverbank is inaccessible for a while in this area, so we followed the roads around until we came to Syon Park, the home of the Duke and Duchess of Northumberland. We didn’t feel like paying the entry fee to go inside, so we just walked through the grounds and peered over the fence. Some buildings that look as if they might have been stables have been rented out to a garden centre, so we wandered in there, used their toilets,  then wandered out again.

The next stop was Brentford, a settlement that is believed to pre-date London. It was important not only because it was where the road crossed the river Brent, but also because it was probably the lowest place on the Thames where you could cross on foot at low tide. There have been bronze age artefacts found in the area, and we briefly considered a spot of mudlarking, seeing as how the tide was out. We saw three policewomen and a policeman wearing a rubber glove looking at some old bones down at the river’s edge, but if it was a crime scene it must have been a very ‘cold case’, I reckon.

Brentford was the site of a major battle during the English Civil War of 1642 between the Royalists (who supported King Charles 1st) and the Parliamentarians (AKA Roundheads), lead by Oliver Cromwell. The king believed he ruled with absolute power by divine right, but he turned out to be mistaken, when God failed to support him at the crucial moment.

We ate our lunch by the lock at the end of the Grand Union Canal, which follows the course of the river much of the way. Then we walked up the towpath, in the opposite direction to the trip I made on the Boris Bike when I first arrived in London. We harvested a few ripe apples from wild trees as we passed. At Hanwell, the canal veers off to the west, but we were following the Brent River Walkway so I was back to exploring new territory.

The first big park we came to had a huge rail viaduct running right across the horizon.  This is the main line north, and trains rushed across every few minutes. When we were underneath the arches,  we looked for metal grills that lead to the interior of the brick supports,  because the artificial caves inside are home to thousands of bats. Felicity climbed up with her iPhone torch to have a look inside, and saw one.

The river runs through a series of green areas which make up the the Brent River Park. The water looked reasonably clean, but it didn’t smell too good, and there was a lot of rubbish hanging in the trees.

We walked through lots of meadows which are still used for producing hay, although this role is not so important now that London does not run on horse-power. In the summer they were filled with wildflowers, but they must have been mown a few weeks ago. We kept seeing information signs telling us about the exotic animals we might see if we were lucky, but we weren’t.

By late afternoon we arrived at Greenford, having walked a bit over 15km. As a lot of it was on sealed footpaths our feet were tired and we were both glad to catch the tube home.

One thought on “River Brent”