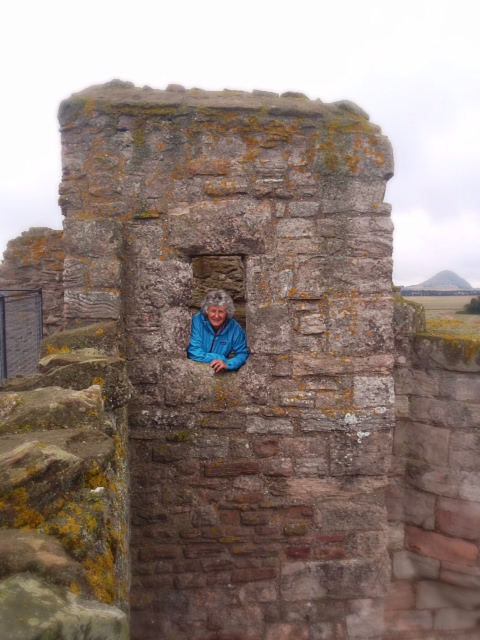 Our walking tour has come to an end due to Felicity injuring her leg. So it looks like we’re going on a castle bagging expedition instead.


Judith and I bused out to the airport to pick up a cheap rental car, only to find that non-UK residents need their passport; mine is safely in London. Fortunately Avis was happy to hire us a considerably more expensive car with just my NZ driver’s licence. Navigating through Edinburgh to pick up Felicity and our gear was challenging,  as they are installing a modern tram system and many roads are closed. Other roads that Google tried to direct us down are restricted to buses and taxis.

We headed south-east to visit the North Berwick area, and the first stop was the 14th century Tantallon Castle. It is situated on a headland looking out at Bass Rock, which has so much bird poo on top that it looks like snow. I was a bit under-dressed for the cold, damp conditions, so that enhanced the illusion.

Although the castle is in ruins, we were able to explore many different sections, including the rooftop battlements. Naturally there was a long history of attacks, sieges and changing allegiances. The original building was built just prior to the use of cannons, so in 1539 it was extensively reconstructed, and many rooms inside the wall at the front were filled with rubble to make them stronger.

The last major attack on the castle was by Oliver Cromwell in 1651. A group of just 90 men with horses were based there conducting damaging attacks on Cromwell’s supply lines. So Cromwell sent several thousand men armed with canons and wrecked the place.

We ate our picnic lunch in one of the guard rooms, just inside the main door, because it was too cold and damp to be outside. As the castle is managed by the Historic Scotland organisation, it is spotlessly clean, so we were trying our best to not leave any trace, but I accidentally squirted mayonnaise on the cobblestone floor which was quite a mission to clean up with only a serviette and no water.

Our next destination was another ruined castle at Dirleton. This one was once owned by the Halliburton family, one of whom (much later) was Felicity’s great, great, great grandmother. This was a very comfortable castle to live in. Many of the rooms had their own latrines, with a chute leading out through the walls and into the moat (now dry). One of the photos shows me in a very dangerous position!

The entrance bridge across the moat is very impressive, although it isn’t a drawbridge as it was originally.  Above the doorway as you enter is a “murder hole”, where unwelcome guests had a heavy rock droped on them as they crossed the threshold.  We started by exploring the vaults, where food and supplies donated by the local population were stored. The two kitchen fireplaces were huge enough to roast whole cows over tree trunks. There are hatches in the roof where cooked food could be hauled up to the great hall above.

We had hoped to go down into the dungeons, but they were blocked off. Until Judith leaned on the barrier and it collapsed! We propped it back up and hurried away. The inhabitants of this castle also managed to get on the wrong side of Cromwell, so as usual he destroyed it.

The ruins are surrounded by impressive gardens. From the battlements we watched locals playing bowls on the manicured lawns. Some of the plants were very interesting, including some with bright blue stems and seed heads. There were also some NZ hebes, presumably planted in recent times. On the way out I noticed a row of Yew trees, and enjoyed another feed of ripe berries.

As we drove away, I made a detour around the pretty village green. In 1590 the people of the town executed a bunch of ‘witches’ there.

Our third and final destination was Seton Chapel.  This was built by a very wealthy man who convinced the Catholic authorities in 1492 to make it a Collegiate Church where priests lived and studied, and presumably prayed for him. Some of the tombs inside had skulls and crossbones on them so I think he might have been a pirate. There were also two effigies, a man and a woman, lying inside.

The ruins of the houses where the priests lived had a water channel through the middle powering a mill wheel. We could also see drains and channels from where they brewed beer.  They did have a well, but when I looked in I thought the water looked a bit dodgy, so it probably was safer to drink the beer. Outside in the carpark I read a sign about the Scots winning yet another major battle with the English on the site.