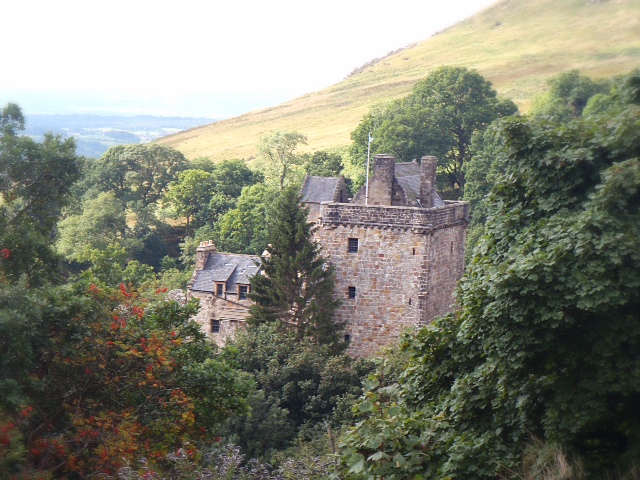 Our accommodation in Selkirk last night was very pleasant. Outside the window next to my bed, a waterfall trickled gently all night; the stream running under the building and out onto the common next door.


Although we hardly needed a high calorie breakfast, Felicity and I couldn’t resist the offer of smoked haddock and scrambled eggs. We hit the road soon after 9 and drove back north-west of Edinburgh, mostly on back roads to avoid traffic and enjoy the scenery. But not without stopping to buy a “genuine famous Selkirk Bannock” from the local bakery, mostly to find out what it was. It turned out to be a bit like a huge easter bun without the hotcross, which made a tasty lunch.

After a couple of hour’s drive we arrived at Felicity and Judith’s ancestral castle. It wasn’t actually built by Colin the 1st Earl of Campbell, he  acquired it through marriage in 1465 when it was still called Castle Gloom. It had been built by the Stewarts about 35 years before, but was badly damaged by a fire started by one of the Stewart sons, who presumably did not approve of the marriage.

Clan Campbell originally came from the highlands, where they rose to power by supporting Robert the Bruce.  However their geneology claims roots tracing back to King Arthur!  Their main stronghold was originally on an island in Loch Awe in Argyle, but Duncan Campbell moved to a castle in Inverary which is still in family hands.

Colin Campbell was keen to move his base closer to the centre of power, and Gloom was the perfect choice. Built on a ridge high above a spectacular valley called Dollar Glen, it was an ideal residence for his position as Master of the Household of James III. When James IV inherited the throne, he ordered the name of the castle to be changed, in gratitude for Colin’s support.

We drove up a very narrow and winding road for several kilometres, but had to park quite a distance from the gates. We crossed a pretty stone ford on foot (Felicity used a small modern bridge). The castle buildings are quite ruined now, but enough remains intact for us to see that the Campbells would have been very comfortable. The main bedrooms in the west tower had walk-in wardrobes, ensuite toilets, and even a stone handbasin built into the wall with a drain leading outside.

We were able to get right up to the roof level, but there was one room right at the top that was locked up because it had bats living in it, and they are protected here in Britain. The views out towards the south are spectacular. There are a lot more trees in the immediate vicinity of the castle nowadays, heating a huge stone building must have used a lot of firewood.

After a couple of hours exploring, we drove back down to the village to eat the bannock in a small park. We then headed west, past the impressive memorial to William Wallace and on to Lake Menteith.

On a small, wooded island in the middle of the lake is the ruins of Inchmahome Priory. This was founded in 1238, and was home to Augustinian cannons for the next 300 years. There were only about 15 of them living there at any one time, but they came and went on teaching missions around Scotland.

It must have been a pretty hard life. They had to wake up at 2.30 in the morning to start their prayers, and only got one meal around midday. There was just one room in the complex where there was a fire. They weren’t supposed to talk unless they were reading the bible out loud, or attending meetings to discuss business and discipline issues. They evolved a sign language to communicate with each other at other times, if you touched your lip with your little finger at the meal table it meant “pass the milk”.

I noticed that one of the tombstones in the church has a skull and crossbones on it. Felicity doesn’t agree with my pirate theory, but I still reckon an ex-pirate filled with remorse might decide that redeeming himself in silent prayer on a remote island might be good insurance for the life hereafter.

It had begun drizzling as we arrived at the dock, so we put on all our wet weather gear for the ride in the open boat. The drizzle turned to steady rain, but it added to the atmosphere. We walked all around the edge of the island, hoping to see otters, or newts, or even a red squirrel, but we were out of luck. It was well worth the effort of getting there nonetheless.