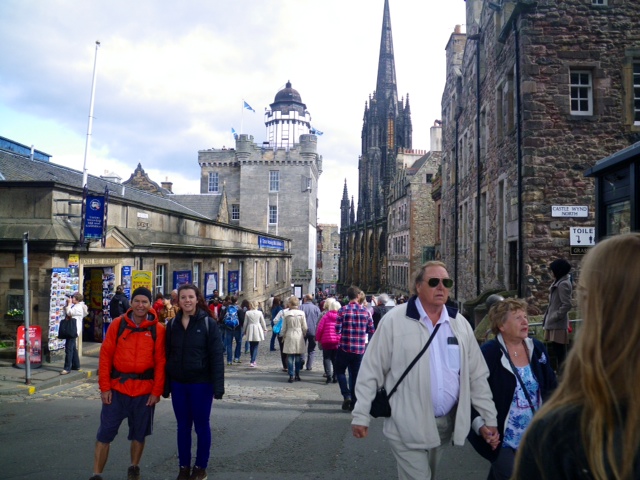 We arrived back in Edinburgh yesterday afternoon on the train, dropped our gear at the apartment we are staying in, and set off to explore. Just down the road we discovered the museum, and that took up most of our time.

I was particularly interested in learning more about the Picts, after seeing their carvings at Weemys. All I knew about them previously (thanks to Pink Floyd), was that they grooved in caves with small fury animals. Their language is now extinct, but is reflected in a few  place names such as Pittenweem, which we walked through a few days ago. They wrote in a script called Ogham, which is pretty much unintelligible, but which we saw examples of in the museum. They also made beautiful jewellery.

When we finally tore ourselves away, we walked around the nearby streets until we saw the Greyfriars Cemetery. Judging by the signs outside it’s main claim to fame is that a small dog called Bobby spent 14 years guarding his dead master’s grave. He (the dog) is buried just inside the gate.

Along one edge of the graveyard is the Flodden Wall, built to protect the city after the Scots’ defeat at Flodden Field. This battle is in the news because it is the 500th anniversary this year. Although the English were heavily outnumbered, the Scottish invaders got overexcited and charged down a hill with their pikes into a swamp and got bogged down in the mud. The cream of Scots society were consequently slaughtered.

This morning we walked up the Royal Mile to Edinburgh Castle, where the theme of Scots and English invading and slaughtering each other at various times was a major feature. There are also many other displays relating to British military history, as we saw in the Royal Scots regimental museum, and the National War Museum. There aren’t many places in the world that the British haven’t invaded at one time or another!

At 1.00 PM we heard a huge explosion, and wondered if yet another attack was taking place. However it turns out that they fire one of the cannons at this time every day, just to keep in practice. The gates of the castle were never taken by brute force, but it changed hands numerous times throughout history as a result of treachery, diplomacy,  invaders sneaking up the cliffs to the north, or starvation when Oliver Cromwell besieged it in 1650.

The entertaining musketeer who told us about this also taught us the origin of the expression “a flash in the pan”, which was when the primer burnt without igniting the charge, “bite the bullet”, which you did in desperation when your self made lead ball wouldn’t quite fit down the muzzle, and “useless git”, which is the small tag of lead that you sometimes had to bite off.

The castle prison was very interesting. They showed the daily rations for prisoners of war: a couple of beers, a loaf of  bread, a generous chunk of meat (or cheese once a week), and a cup of peas or beans. Except Americans, who were considered pirates, and only received a small piece of bread!

We walked down to the Princess St gardens to eat our lunch in the sunshine, while being entertained by a bagpiper and drummer. Afterwards we explored Calton Hill, which was the first public park in Britain.

At the bottom,  Felicity and Judith decided to go shopping, so I chose to hike up to Arthur’s seat at the top of the big hill overlooking the city. I was impressed by the number of tourists who make the climb; you can see small figures silhouetted against the skyline from all over the city. The view is amazing,  and I particularly enjoyed seeing the Fife coast that we have just walked down.

On the way back into town I passed Holyrood Palace, which is where the Queen stays when she is in town. I guess it’s like having a batch at the beach. On my way back up the Royal Mile, I stopped off at another museum which showed how people lived in Victorian times and earlier. Edinburgh in those days was one of the most densely populated cities in the world, with buildings up to twelve stories high in the old city. Poor people lived in the basements, attics or alleyways (called “closes”), while the wealthy lived just above street level. Without modern sanitation it was a pretty unhealthy lifestyle.