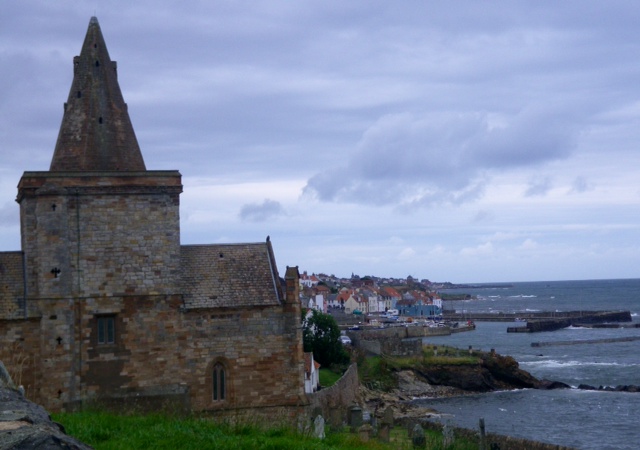 Our walk today was only four hours, past several picturesque fishing villages with stone harbours. You wouldn’t mistake it for the Mediterranean though, it’s grey and cold, and we all ended up wearing our heavy coats. I can see why so many Scots were keen to emigrate to New Zealand!

The earliest stone harbours were built with the help of Dutch dyke builders. Large stone breakwaters extend out from the rocky coast with a narrow entrance facing south. The fishing boats are all quite small. There was a big trade with Holland a few hundred years ago, and many of the houses have Dutch gable roofs.

At one point we stopped to explore an interesting network of caves which have been hollowed out of soft sandstone. They were fairly dry, but wouldn’t be great for camping because heaps of doves were nesting in every nook and crannie, so the floor was covered with bird poo. Every time I entered a new chamber I had to dodge angry birds trying to escape.

Many of the place names here contain the word Neuk – which I’ve learned means ‘corner’, and is obviously the origin of nook. When we passed through Ansthruther, we saw that several buildings had intricate designs on the outside made of sea-shells.

St Monan was a famous Christian saint who lived here until some marauding Vikings killed him. Felicity and I visited an old church at the west end of town which is where he did his thing.

Our first view of the town along the coast was a windmill. Below it are a series of stone ruins that was once a thriving salt manufacturing industry. A Dutch man discovered that salt could preserve fish and meat, and this lead to salt becoming incredibly valuable. There were places in Germany where it could be mined, and an area in the south of France where there was enough sun to produce it by evaporation.

Up here in Fife, they had lots of fish that needed preserving, and very salty seawater. There is also coal available right near the coast; low quality but cheap. They cut a channel through the rocks and made a big stone pool to collect water on every tide. The windmill pumped it up into big iron pans which were heated by coal fires which burned continuously while the saltmakers stirred the pans and raked the crystallised salt to the side. It took between six and eight tons of coal to make one ton of salt. At one time salt was Scotland’s third biggest export commodity, but the removal of tax meant that it became uneconomic.

One thought on “St Monans”