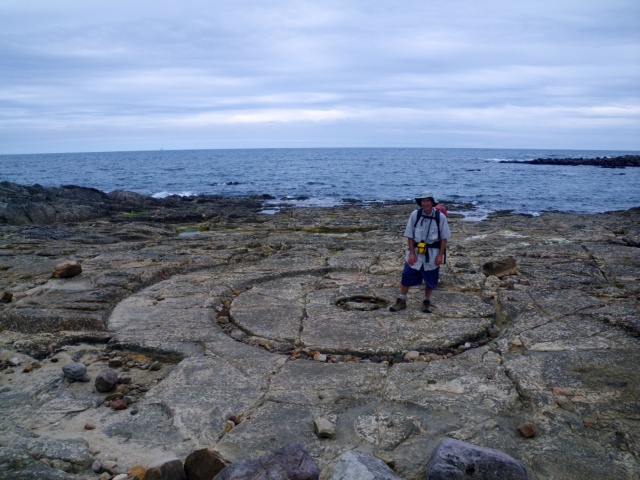 We left St Andrews bright and early this morning, and set off along the Fife Coastal Walkway. The first couple of kilometres were past the small port, which has been created by placing gates over the end of a river. As it was low tide, the sea was considerably lower than the water inside.

The path climbed up past a caravan park, and soon we were on a wild coastal cliff. The North Sea was calm today, but I’m sure it gets pretty rough at times. Judith surprised a deer which bounded away from us into the scrubby bush.

After a while the path led up to the top of the cliff, and what a contrast! A manicured golf course stretched out in front of us. I knew that the St Andrews course was on the coast, but I didn’t realise that its popularity with tourists means that the entire coast in this area is one golf course after another! Most of the time we were walking beside the sea, but every now and then the track would be alongside a green, and we would have to beware of flying golf balls. The grass was nice to walk on, being very short and springy underfoot.

We came to a huge outcrop of stone called Buddo Rock which had a split through the middle. Judith climbed up through the bird poo to see the view, but she reported that the grey sea was all that was visible so we took her word for it.

At one place the path diverted inland, and we passed a farm with golden fields of barley, just about ready to be harvested. This area is called Boar Hills, but to my disappointment there were no boars to be seen. After that the trail crossed a creek, and meandered through the woods for a while, past a picturesque stone ruin before ending up back on the coast.

A cave alongside the path where legend tells that Constantine I, King of the Picts was killed in 874 was interesting. He was famous for forging an alliance with the Scots, but when he started a battle with the Danes his Scottish allies ran away and that was the end of him.

About mid afternoon we arrived at Fife Ness. The tiny harbour and a sliver of land behind it used to be owned by the Danes, who built a dyke (ie: wall) to keep the Scots away. In more recent times, the harbour was used to ship stone from a local quarry to bigger towns in the area. They also tried to build a lighthouse on a reef just offshore,  but the sea kept bashing it down so they eventually gave up and parked a lightship there instead. Nowadays there is only a small marker, as they expect shipping to use satellite navigation. The harbour is almost completely derelict, with just a few circular marks on the stones left by a loading crane.

We were debating whether or not to continue around the coast or to walk up a road to our destination when a Scotsman named Tom came out of his caravan and offered us a cup of tea. He had a couple of friends, one Welsh and one Irish, so we sat and chatted with them for a while. He convinced us we wouldn’t miss much by taking the shorter route up the road, and as we had been walking for over six hours at that stage we decided to take his advice.