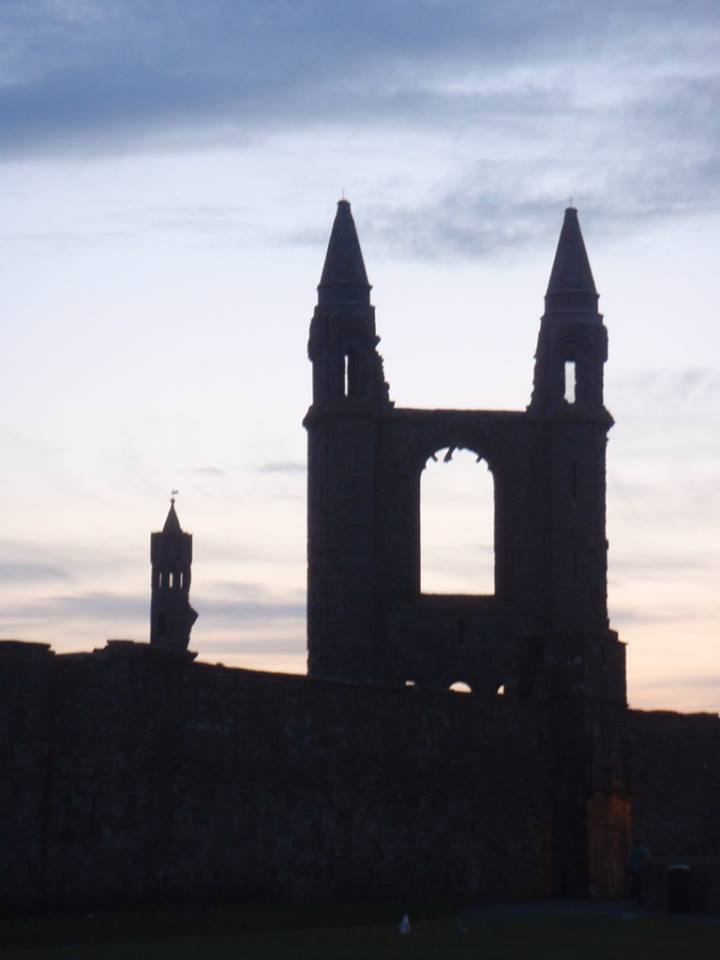 Yesterday we took the train from London up to Dundee in Scotland. Our first sight of the city was when the train stopped for about five minutes on the Tay river bridge, seemingly suspended high in the air above the water.

This morning, Judith and I wandered around the centre of town for a couple of hours while Felicity attended a meeting at Dundee University. At the McManus museum, the first thing that caught my attention was an exhibit about the first Tay bridge getting destroyed in a storm, and a train plunging into the river killing 57 people!

Also in the museum is a skeleton of a huge 40ft hump-backed whale which swam into the Tay estuary in 1883,  not realising that the local people were keen whalers. They rowed out and stuck it with harpoons, but it managed to get back out to sea, only to be found dead a bit down the coast a week later.

As we were leaving, we went up stairs to a viewing platform, where we could see through a glass section of the roof to a spire with female figures around it. They are the Greek Muses, nine daughters of Zeus who are the goddesses of literature, science and the arts. And the origin of the word Museum I learned.

Down at the docks, we checked out the HMS Unicorn, the oldest British warship still afloat. This sailing frigate was launched in 1824. The sorry state of the hull suggest she won’t be afloat for much longer without some major restoration.

After lunch, we took a bus to St Andrews, where Felicity and Judith spent a couple of hours in the archives looking at books written by a great, great uncle. I went for a long walk up the Lade Braes Walk, which follows Kinness Burn for several miles up a valley past old stone mills, parks and woods.

I rejoined Judith at the St Andrews museum and the two of us walked back into town while Felicity had another meeting. We purchased food for a picnic dinner, which the three of us ate on the beach below a ruined castle while being menaced by a remarkably fearless skua which wasn’t at all intimidated by us eating chicken drumsticks.

St Andrews once had the biggest cathedral in Scotland. Supposedly it contained relics of one of the disciples, so in the middle ages it was a major pilgrimage centre. It was also one of the places where the reformation first got started, and we passed several spots where initials made from brick inlaid in the road mark the spot where a heretic was burnt at the stake.

After the country became Anglican, the town’s fortunes declined somewhat, until 600 years ago the university was founded; the third in the English speaking world (after Oxford and Cambridge).

The third main claim to fame is that this was where the game of golf was first played. I was amused to read that the first recorded use of the word was when King James II attempted to have it banned on Sundays.

After our dinner we spent the last hours of light wandering around ruined buildings, under interesting archways and through tiny alleys (or wynds as they are called). Tomorrow we have a long walk, so our opportunities for exploring this historical town are limited.