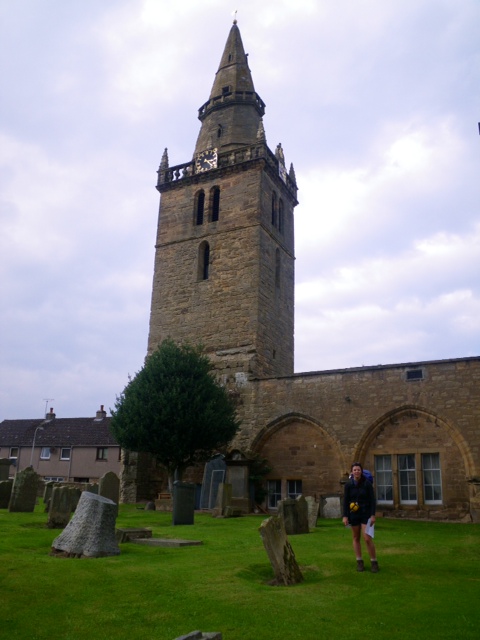 After a rainy night, we were expecting a wet hike this morning, but the clouds blew away as we were eating breakfast and our coats stayed in our packs.

Instead of the standard cooked breakfast, our hostess Anne delivered fresh fruit (strawberries, raspberries and blueberries) plus a basket of hot croissants to our room at 7AM. In our fridge we found yoghurt, muesli, smoked salmon and local cream cheese, so we were very well fed.

Just past the church that Felicity and I visited yesterday, we saw a conical stone building that I recognised as a doo’cot. This was once used to house hundreds of doves that were bred for food. I haven’t seen any on the menu of local restaurants unfortunately.

About a kilometre out of St Monans we came to the ruin of Newark Castle, on a spectacular spot at the end of a headland. Some sections were fenced off because they are falling down, but we were able to explore a couple of rooms. There was another ruined castle a bit further on, but it was only a pile of stones.

Just before the town of Elie, we came to Lady’s Tower, built for the wife of Lord Anstruther so she could go swimming at a nearby beach (and warm up next to a fire afterwards). The roof is long gone, but the round tower with windows in every side is well preserved.

After the town, we walked past yet another golf course, which had numerous pits that once had guns defending the entrance to the Firth of Forth. When we climbed up the hill to the top of Kincraig point we saw lots more evidence of WW2 military installations. There is an airshow on this weekend at a nearby airbase, so we were treated to the sight of four RAF jets screaming overhead in close formation. By close, I mean a couple of metres apart; less than half a wingspan!

The next section of the path was a long trek down a beach to the town of Lower Largo. All along the edge of the sand dunes there were huge concrete blocks to stop the German tanks from landing. As we walked through the streets of the town, we passed a statue of Robinson Crusoe in front of the house where Alexander Selkirk (the actual person who was marooned for four years on the Juan Fernández Islands) was born.

Felicity had an appointment with the secretary of the Cupar Old Church where her great, great, great grandfather was the minister for 51 years until he died in1824, so we took a couple of buses to meet her. She kindly opened up the church so we could look around and see his memorial on the wall. She was accompanied by an elderly retired minister who had an interest in history, and who told us what he knew about the family.

The best part of the visit was that we were allowed to climb up the tower, which was built in 1415. As we ascended the winding stone staircase, I noticed several cracks that had a metal plate fixed to each side, and a line scribed across them both so they can keep a check on whether the cracks are getting wider. I was glad to see there hasn’t been any movement since they were installed in the mid 90s.

About two thirds of the way up we came to a room where the clock mechanism is housed. The secretary told us she has to come up and wind it sometimes, or adjust it by an hour for daylight saving. We kept climbing up a series of wooden ladders, past a room where the bells are hung, until we reached the penultimate chamber, just below the steeple. We got a great view over the town through a small barred window. A couple of bat skeletons suggests this area doesn’t get visited often.

We had a quick look around the graveyard, but only found a couple of family connections. We had been intending to have a picnic lunch, but the weather had turned quite cold, so we were very grateful to accept the offer of a cup of tea in the church hall. On our way back to the bus stop, we stopped to look at the house where the Reverend Campbell grew up as a child.

One thought on “Cupar”