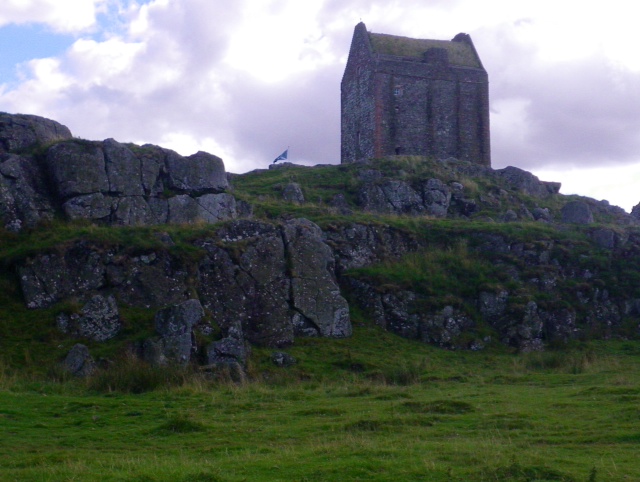 Bothwell castle is on a cliff above the Clyde river, upstream of Glasgow. In the middle of the 13th century Walter Murray started building what would have been one of the largest castles in Scotland, but before it was finished he got caught up in the wars of independence, and the castle was captured by the English, recaptured by the Scots,  etc, etc.


Because we were first to arrive, the ticket collector told us a long story about the history of local warfare, which involved Edward I, Willam Wallace, Robert the Bruce, and Mel Gibson. Edward turned up for one invasion with a huge seige engine called a belfry, which was a wooden tower covered with wet cow hide (to stop burning arrows), from which his archers could shoot at the castle defenders. Anyway, after just 100 years the original castle was a ruin.

In 1362, the heiress of the castle castle married Archibald the Grim, of the Black Douglas clan. His family were known as Black to distinguish them from the Red Douglases. Whenever Scots weren’t fighting the English, they used to fight other clans, but every now and then, despite their best efforts, there would be outbreaks of peace and they had to fight their own families.

Archibald built a second castle on the foundations of the first, and this work was continued by his son. In 1455 however, the Douglases did something to annoy the king and all their property was taken off them. It then passed through several other families, until at the end of the 1400s they got it back by swapping it for another castle. In 1700, the latest Archibald Douglas (it’s quite confusing that the Scots like to recycle the same Christian names), decided to build a normal house nearby, and used a lot of the stone from the castle, which was left in ruins a second time.

Our second stop was Craignethan Castle. It was the last fortress built in Scotland, and was designed to withstand artillery attacks. There are high cliffs on three sides, and a deep ditch on the fourth. Inside the ditch is a caponier, which was discovered when the ditch was excavated in the 1960s. This was a stone-covered tunnel with gum ports, so that even if attackers climbed down into the ditch they could be shot from the side. This was the latest idea in military architecture at the time. Unfortunately, there was no ventilation provided, and as guns generated a lot of smoke and noise, the soldiers inside the tunnel were soon in pretty bad shape.

Although the inner wall was built 5 metres thick (to withstand cannon balls), a major shortcoming of the site is that it was overlooked by higher ground. This probably explains why it was captured and destroyed within about 50 years. The ditch was filled in and the towers pulled down. A century later, in the middle of the 1600s, the new owner built a normal house in the outer courtyard, which is still intact today.

The third stop today was not really a castle, more of a fortified farmhouse. Smailhome Tower is not far from the English border, which meant that the landowner had to contend with gangs of raiders coming to steal his cattle. And, no doubt, angry English farmers looking for their stolen animals. It was set up for fairly long sieges, with vaulted basements suitable for storing large quantities of food (eg: beef) and other supplies. The building is in quite good shape, and has an impressive “green roof” with live grass and other plants.

We had also planned to visit Kelso Abbey, in the town where we are staying tonight. Unfortunately, by the time we checked into our B&B, made a coffee and headed into the town it was closed. I was about to take a photo of Felicity and Judith with the abbey behind a fence in the background when a kind woman offered to take all three of us. She then told us that she was in a choir that would be performing at 7pm in the Old Parish Church and that the audience would be walking to the Abbey afterwards.

We just had time to eat a delicious dinner (marinated venison stew for Felicity and me) in a nearby pub before the show. About five years ago a fragment of parchment was found in Hawick (pronounced Hoik) Abbey, with some music and lyrics in Latin,  written back in the 12th century. These were chants used by the monks in their ceremonies. British artists are producing three shows using the fragments as inspiration, and tonight was the second. It featured the world première of a piece by composer Michael Nyman, who wrote the music for the movie “The Piano”, among other accomplishments.

There were two choirs (a bit short on men I thought), and four fiddlers with violins. It was an entertaining show, and ended with a walk through a graveyard into the ruins of the Abbey, where we were able to see the actual parchment. It is made of very thin sheep leather, and features black writing (made with lamp soot), and is coloured with blue lapis lazuli and red cochineal, both of which would have been very rare and expensive in those times. We enjoyed our unexpected taste of local culture very much.