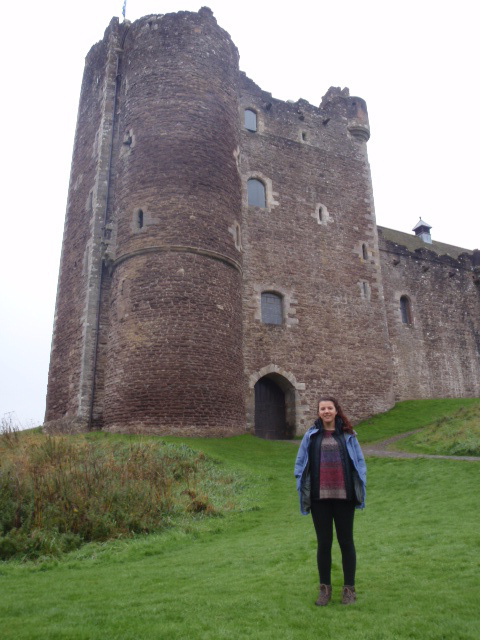 We were very excited last night to learn that the first castle on our list for today was the one used by Monty Python in the Holy Grail movie. The Pythons actually stayed in the same hotel that we did, possibly in the same room!

Well, one of them might have been in our room. We arrived at the castle on the stroke of 9, which meant that we had half an hour to wait before it opened. Several busloads of tourists turned up, leaped out and took photos, then left again while we were waiting. I guess that means they didn’t have to pay, they must have been on budget tours.

Judith was even more excited than us, because the castle was also used to film the pilot of “The Game of Thrones”, and she recognised several of the scenes. When we were finally allowed in, they issued us all with an audio guide narrated by Terry Jones (of Monty Python), and Judith with a pair of coconut shells to simulate horse’s hooves clopping across cobblestones; to add atmosphere. When we left, Judith bought a bottle of Holy grale, which is “Tempered over burning witches”, as a present for a friend.

It must have been fun for tourists who visited when the Holy Grail was being filmed. Many of them were pressed into service as extras to make up crowds. One student even agreed to be dressed as a guard and killed twice, falling some distance off a wall. We looked out the window where the king tells his son “One day all this will be yours, lad”, and the prince replies “But I don’t want it, I want to sing”.

Besides being a famous movie set, one or two prominent Scots lived in the castle over the years. In its present form it was built by Robert Stewart, Duke of Albany in the late 14th century. Stewart was the real power behind the Scottish throne for over 30 years. He was first appointed regent when his father King Robert II became ill, and continued during the reign of his brother and then James I, who got captured by pirates and handed over to the English who held him for ransom. My regular readers will note that this adds weight to my theory that pirates played a surprisingly large part in Scottish history.

The castle is on a prominent site at the confluence of two rivers. There was a Roman fort nearby, as they also recognised the strategic location. Mary, Queen of Scots  visited Doune regularly, and we had a look around the rooms where she stayed. In 1745, the castle was used as a prison for English captured at the Battle of Falkirk, but several of them escaped by tying their bedsheets together and climbing down the tower.

Our second stop for the day was Dunblane Cathedral. It isn’t the slightest bit ruined, in fact it is still in daily use. As we were leaving, a hearse was backing up to the door for a funeral. The tower was built in the 11th century, but most of the huge building is Gothic from the 13th century. The stained and painted glass windows were very impressive, even if they were relatively modern (about 200 years old).

Our main destination was Stirling Castle. Because this is built at the furthest downstream crossing of the river Forth, at the narrowest part of the island, it controls access to the Scottish Highlands. It has always been one of the most important castles strategically, and changed hands regularly whenever there were wars, mostly as a result of sieges. I thought it was not all that interesting architecturally,  but its site on top of a rocky outcrop above the town is certainly impressive.

In 1304, the English turned up with a huge catapult,  which could hurl rocks weighing over 300 KG! The Scots tried to surrender, but the English commander was keen to try out his latest weapon,  and managed to destroy the gatehouse. Between 1500 and 1600, the Stewart Kings James IV, V and VI used Stirling Castle as the centre of the Scottish Court. They considered themselves a major European centre, and buildings from that period reflect what was fashionable in other cities.

In later times, the Castle was mainly a military centre, and it was owned by the War Office right up until 1964. Since then there have been major restoration works which are still on-going. We checked out the regimental museum of the Argyll and Sutherland Highlanders, where many of Felicity’s distant Campbell cousins served and commanded.

By this time it was well into the afternoon, so after a quick visit to see the massive kitchens full of fake food, we retired to the car to eat our lunch out of the rain.

Our final visit was to Argyll’s Lodging, a very fancy town house next door to the castle where the Campbells of Argyll lived for almost 100 years from 1666. The house already existed when they bought it, but Archibald Campbell, 9th Earl of Argyll extended it significantly so that it is almost a small palace. It was used as a military hospital at the beginning of the 20th century, and as a youth hostel in the 1960s, but now it is owned by Historic Scotland, who have restored some areas and have their offices on the upstairs floors.

2 thoughts on “Doune and Stirling Castles”