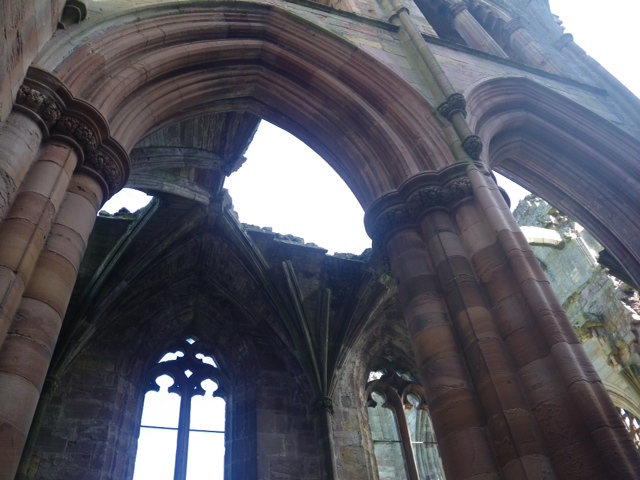 It’s definitely autumn here in Scotland, as is probably obvious from our clothing in the photos. We woke this morning to gale force winds and a dark grey sky. “The wind might blow the rain away” predicted our hostess optimistically at breakfast.

She was wrong; by the time we reached Jedburg it was raining steadily, so we put on all our wet gear to walk up to the castle. It wasn’t open yet, but we have all seen enough castles for one week so we weren’t particularly disappointed. We had hoped to see Mary Queen of Scots’ house, but that is closed until 11 AM on Sundays, so we had to give that a miss too.

By the time we got back down to the ruined abbey in the centre of town, the staff were ready for business, so we spent the next hour looking around. This was probably the most impressive of the four abbeys we’ve visited, with huge stone arches towering high into the sky. We were able to climb some of the way up a narrow spiral stairway to a platform at the back of the main hall. I was interested to see that a couple of stones which had once been part of a Roman alter to Jupiter 800 years before had been re-used.

Dryburgh Abbey is out in the countryside,  set amongst huge trees in a park-like environment. It is quite badly ruined structurally, but in one room we could see a rare example of surviving plaster over the stonework, with painted designs. It is badly affected by mould, and conservators are still experimenting with methods to stop further deterioration. When we first entered the room we could hear the distant sound of monks chanting, and we briefly wondered if it was ghosts before deciding that there must be a hidden sound system.

As usual, the monks had a pretty hard life, with just one room that had a fire, 2 AM starts and one meal a day. They also had regular inspections to make sure they had no personal possessions stashed away. Because prayers lasted for hours, the monks had pottery piss-pots that they could use under their robes, since they could not go out until ceremonies were finished. The records show that one monk ended up punching the Abbot, and got immediately expelled from the order!

We stopped a few kilometres away to walk down a woodland path to see the Wallace Monument (one of several around Scotland). This one was organised by Sir Walter Scott. He must have been quite a guy to wield a sword as long as his own height! We couldn’t see if he was wearing anything under his kilt.

A bit further on, Felicity noticed a standing stone marked on her map, presumably from neolithic times. We found the track and walked up hill over a paddock in a howling gale to find that it isn’t standing any more; it obviously fell down some time ago. Perhaps the wind blew it over?

Next stop was the Trimontium Roman Fort at Leaderfoot. It was fortunate that the site was well signposted because there was nothing at all to see. There has been a lot of archaeological work done in the past, but they fill the trenches in again afterwards to protect the remains. It covered many acres and housed thousands of soldiers, with an amphitheatre, bath houses, parade grounds and a large stone  bridge across the river.

All we could see were fields, but we picked some very fine blackberries on the way. The most impressive sight in the area was a high Victorian rail viaduct, but it was securely fenced off to prevent access.

Our final stop was Melrose Abbey. This was probably the least impressive building of the day, partly because much of it was covered in scaffolding to allow repairs. The notice said they were keeping old skills alive, but I noticed they weren’t using traditional wooden scaffolding,  which was notoriously unsafe. I guess I don’t blame them. Melrose was still well worth the visit because it has a museum with hundreds of small objects recovered from drains and excavations.

Some of the Roman objects were fascinating. Their crockery didn’t just have painted decoration, many objects had raised designs made with molds. There were coins, pieces of jewelery, and other small personal items that demonstrated a level of sophistication that was not matched by the British until about 1700 years later.

The museum also had displays of stone carvings, many of which have been removed from the ruins of the abbeys over the years to decorate private homes. Small sections of flooring with glazed tiles in geometric patterns also helped us visualise what the buildings must have been like 700 years ago.

Melrose Abbey is popular with Scots because Robert the Bruce’s heart is supposedly buried there, although we have heard a number of conflicting stories. The official line is that this was his dying wish, but elsewhere we have heard that he wanted it to be buried with soldiers who died fighting the infidels.

The most convincing account so far is that he wanted it to be buried in Jerusalem,  and that a friend was transporting it there in a silver casket while on one of the crusades. The Christians supposedly encountered a Moorish army in Spain,  so the friend flung the casket at the enemy and charged into battle shouting “Robert I die beside you”. However, the Christians were victorious,  but too weakened to continue the crusade, so they recovered the casket and returned to Scotland. The friend gave it to the Bishop of Melrose for safe keeping, but when the next crusade was organised he refused to give it back, so in Melrose it stayed.

In recent times, a lead container believed to contain a heart was dug up at Melrose by archaeologists.  There seems to be no evidence that it belonged to Robert the Bruce, but nonetheless they re-interred it with much pomp and ceremony in the grounds under a special memorial stone. Now it is a major tourist drawcard, as I suspect the Bishop was smart enough to realise it would be.

I can’t help wondering if in Jerusalem there is someone selling a  tour to see where Robert’s heart is buried, just near were you can buy splinters of wood from the true cross that Jesus was crucified on!

One thought on “Border Abbeys”