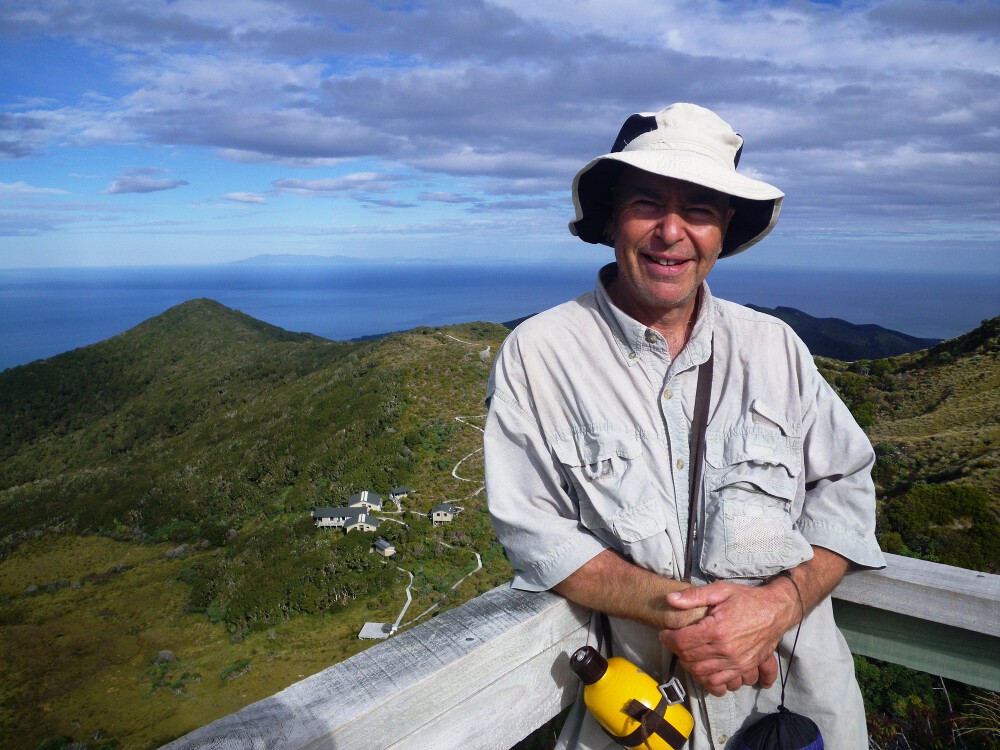 Tonight Felicity and I are staying in the Okaka Lodge, about 800m above the south coast of NZ, on the edge of Fiordland National Park. This isn’t your average tramping hut; we’ve shared a hot shower (which cost us $10) and purchased a bottle of wine to drink with our dinner. There are even 12v electric lights!

The Hump Ridge is a private track, run by a trust that was set up in the town of Tuatapere back in the 1980s. At that time the area around the town was home to 39 timber mills, but since it became illegal to log native trees all but one has shut down. Locals realised that the town needed an alternative source of income, and the track is the result.

We started this morning by walking along the beach, but after a while we turned inland and began climbing up and up through the magnificent podocarp forest that the loggers didn’t get to. There were a few viewpoints where we could look over to Stewart Island in the distance, and Solander Island further to the west. There is a lot of boardwalk on this track, which is a bit hard to walk on, but has the advantage of allowing you to look at the scenery instead of your feet.

Just before the lodge, we left our packs and walked around a boardwalk that looped around a series of pretty tarns and rock stacks surrounded by stunted alpine plants. There is a huge wilderness area in this corner of the country, and we have enjoyed looking out over it for the first time.

After breakfasting on porridge supplied by the hut warden we were on our way by 8AM. The first couple of hours was mostly boardwalk along the Hump ridge, but after a while the track entered the bush and turned into wooden steps. Thousands of steps, down down down, which is hard on the knees when carrying a pack.

We were very glad to reach the historic south coast tramway, and the first of three huge wooden viaducts. The Percy Burn viaduct is the highest wooden structure of it’s type in the world, and we were privileged to be among the last people to walk over it. Apparently it is likely to fall down in an earthquake, and as it will cost between 2-3 $ million to bring up to standard a new track is being cut down to the river with an ordinary footbridge. In the 1970s these structures were almost derelict, but lots of work has been done since to make a comfortable walkway, but unfortunately not up to an acceptable standard.

Although the tramway is pretty much flat, the old wooden sleepers were slippery at times, and we had to look out for the tops of the iron spikes which used to hold the rails in place. We even had to negotiate a few sections of mud, which is more like a traditional Fiordland track.

The Port Craig lodge is located on the site of an old timber port that closed down in 1928. The only original building left is the schoolhouse, which is now a standard DOC hut, but everywhere you look there are relics of the once busy town.

We dropped our packs and headed down to the beach, hoping to swim with the local dolphins, but they didn’t show up so we settled for a splash in a nearby creek to wash off the sweat and dirt from the trail. We sat beside the old wharf for a few minutes to admire the view, but then the sandflies struck and we decided to quickly retreat to the lodge to cover our bare skin with more clothing.

We enjoyed a coffee while we were there, then set out on a tour of the “town”, clutching a pamphlet which explained what the various brick and concrete ruins used to be. Everywhere in the bush we could see old bits of abandoned machinery and other bits of metal junk. At one ex-house site, someone had left a metal wash-tub hanging in a tree, and now a six inch diameter branch is growing through the rusted bottom!

When it was in operation, this was one of the most sophisticated logging operations in the country, but it turned out that the trees were not big enough for it to be profitable,  and the business was already in trouble when the depression arrived. When WW2 started the army supposedly burned the wharf in case the enemy used it to mount an invasion.

This tramway would make a great cycle trail, but much of it passes over Maori land, and it seems there is a lack of local support, so it may never happen. Despite the intention of bringing money into the Tuatapere community, it turns out that most of the people employed to run the Hump Ridge track are from elsewhere – our host last night was a Canadian women who got her work permit because there was no locals with the necessary skills.

Tonight’s warden is just about to give us a compulsory briefing, then it will be time to eat the fresh (not dehydrated) venison I’ve been carrying for the last two days, and drink another (rather expensive) bottle of Pinot that was flown in by helicopter. What luxury!

We are now back in civilisation after yet another long walk. Thanks to the porridge at 7AM we were on our way as soon as it got light enough to see the track. Because it was so early, we were serenaded by bellbirds and tui for the first couple of hours. Most of the way was relatively flat compared to the previous two days, but it was still 20Km along the coast to the road end where the shuttle picked us up at 3PM.

Along the way we passed under a single strand of No 8 wire that used to be the telephone line to the lighthouse at Puysegur Point. There are still ceramic insulators attached to trees along the way – the linesmen didn’t bother with poles. Unfortunately, constant tree falls meant that it was out of action an average of 220 days each year!

Several sections of the track ran along the beach, and we both enjoyed seeing the native forest right down to the shore. We stopped at a huge log for lunch, and were immediately joined by a couple of thousand sandflies.  Felicity relied on her raincoat and leggings to keep them off, but I slathered myself with Deet, which worked well enough, apart from making my sandwiches taste a bit funny.

We were very lucky to have enjoyed fine weather the whole trip; the shuttle driver told us that it is common for the area to be covered with cloud and some people miss out entirely on the spectacular views. The Hump Ridge has been a great adventure – a bit more up-market than most NZ tracks, but well worth the expense for people comfortable with the relatively long distances.