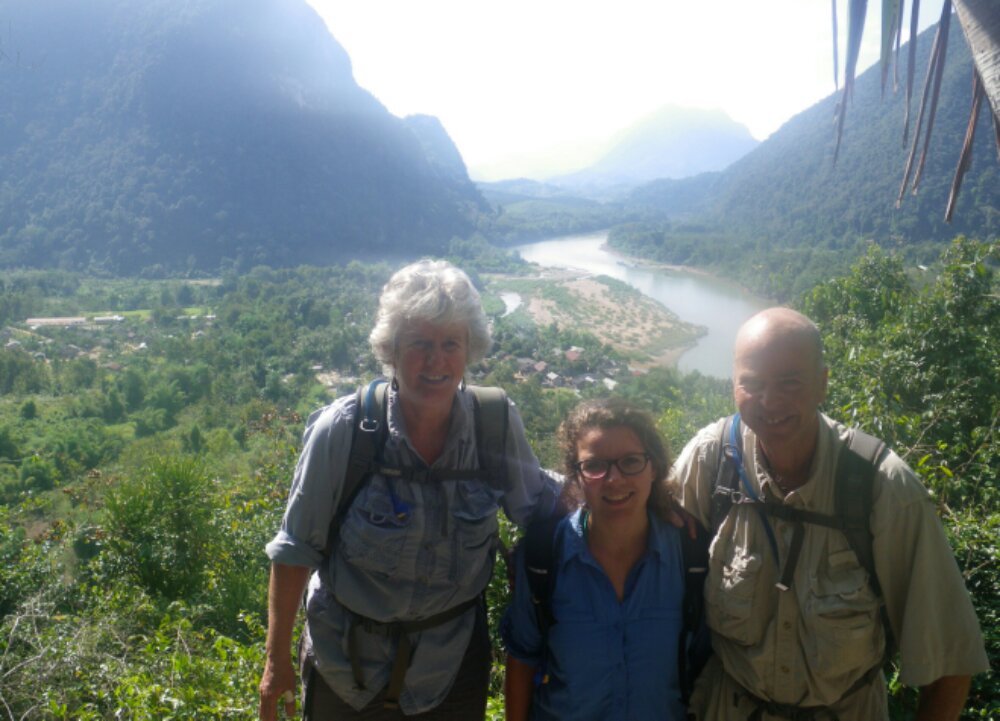 Yesterday we took a minibus to this small town on the Nam Ou river.


It is normally at least an eight hour bus journey, but we naively thought it would be more pleasant to do it faster in a smaller vehicle.  At the bus station, other travellers who clearly had more experience than us rushed to claim the front seats, so the three of us ended up in the back.

The first part of the journey was on a fairly good, but very windy road over the mountains. After the first passenger vomited, the driver passed out small plastic bags for the rest of us just in case. Judith had a sore throat when we started, and was soon feeling rather miserable, but all of us managed to keep our breakfasts.

After the next big town the road surface became very rutted and bumpy, and we were bounced around alarmingly. Fortunately I managed to wedge my arm between the window and the van body, so at least I had some fresh, if dusty air blowing on me. At one small village where we stopped briefly, we were a bit horrified to see children with various dead native birds hanging from bamboo poles, offering them for sale. When our driver purchased some and stuffed them in the boot we were even more disgusted.

We thought that because the final section of the road was relatively flat, our ride would be more comfortable, but the driver was in a big hurry because he intended to drive all the way back before nightfall. I tried as hard as I could not to look at the road ahead where I could see the blind corners he was using to pass trucks, motorbikes and other slow vehicles.  We ran over at least one chicken, and several pigs, cows and children had narrow escapes. He probably holds the Laotion land speed record because the trip took just under six and a half hours.

When we finally arrived we were all so keen to get out that nobody noticed Judith’s iPad tucked down the side of the seat. Needless to say she was very upset when she realised it was on it’s way back to Luang Namtha.

We booked into a lovely little bungalow overlooking the river, and wandered around stretching our legs. When we stopped at a cafe for a mango shake I realised that the bus ticket had a phone number on it, but by the time we found a helpful Lao speaking person to ring, the bus station had closed for the day.

This morning we had booked a boat trip up the river to Maung Ngoi, so when we arrived at the tour office we asked the manager to try ringing the bus station again, with an offer of a reward. To Judith’s delight, the driver had not only found the iPad, but was prepared to drive all the way back here to drop it off for $100 (probably more than he would normally earn in a month, but less than our insurance excess).

The river here is very pretty, with towering limestone cliffs on either side. We travelled up by motor-boat with kayaks in the back for the return journey. Nearly every restaurant and hotel in Maung Noi has various bits of old American military hardware from bombs and missiles displayed outside,  left over from the secret war in the 1970s. For almost ten years, the Americans spent almost 2 million dollars per day bombing this area of the country, to try and stop the Viet Cong smuggling men and material down the Ho Chi Minh trail to Cambodia and South Vietnam. By the late 70s, most towns in northern Lao had been completely destroyed, even though this country was never actually part of the war.

Just outside the town, we visited the Phanoy cave where the townsfolk hid from the bombing. We also climbed up the limestone cliffs for the great view behind us in the photo. The motor boat then took us back down river to a beach where they served us a picnic lunch on a banana leaf.

We spent the afternoon happily kayaking home. There were some rapids which were enough to get us wet, but not particularly challenging.  We stopped at another Khamu village for a walk around, and at another beach for a swim. Back at the tour office, our daughter was very pleased to be reunited with her beloved iPad.

Tonight we ended up in an Indian restaurant which turned out to be surprisingly good for a small town, so we are all feeling very satisfied with our day.