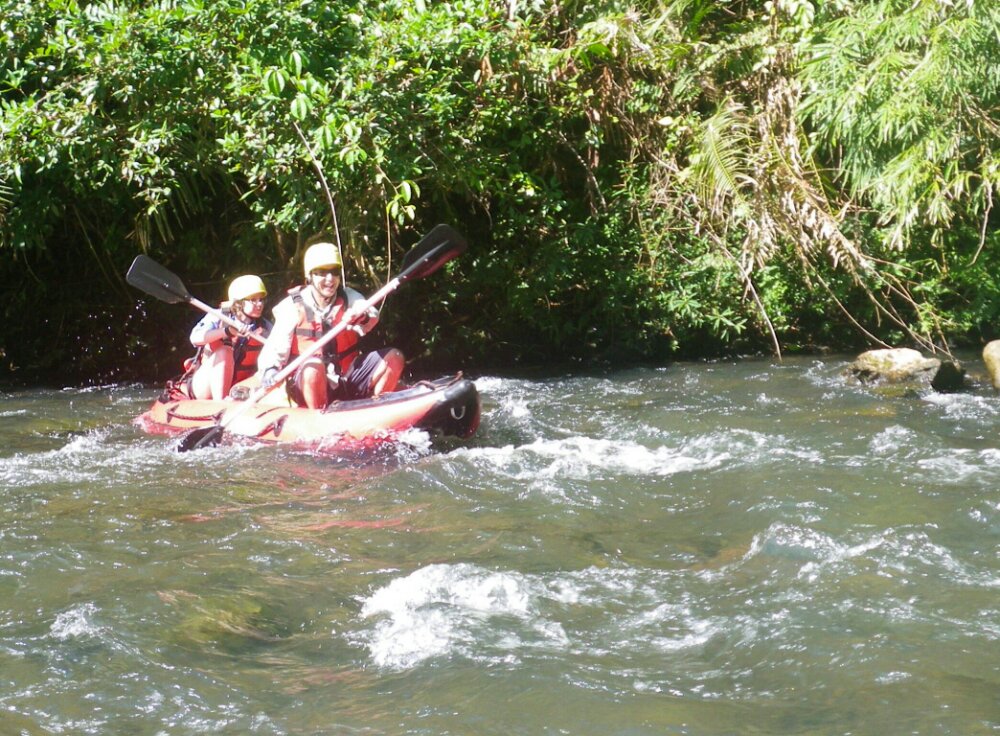 We’re back in civilization after two days kayaking through the Laotian jungle. When I first saw that the boats we would be using were the inflatable variety I was a bit disappointed, but it turned out that they were ideal. This time of year the water level is only just high enough to be navigable,  with quite a few rapids to negotiate.

The Green Discovery tour operators had only two boats available when we booked, so we had an excellent 26 year old guide named Oun all to ourselves. This river, unlike any of the others we have seen so far in Lao, is very clean, and much of it flows through one of the National Protected Areas where hunting an logging are supposedly forbidden.

It took me a little while to get used to using a paddle that wasn’t feathered, and to steering without a rudder, which would have been useless in the shallow water. We often bumped over rocks and boulders, and occasionally I had to jump out and pull us off obstacles when we got stuck. I didn’t quite tip us out, but on one  corner the kayak shot under some low hanging branches which forced us to abandon ship rather suddenly. Fortunately the water was quite warm so it didn’t bother us being wet.

After about three hours, we pulled the boats out onto the bank for a lunch stop. I noticed a pile of mussel shells, and Oun told us they would have been left by a jungle cat or a bear. He had collected some banana leaves along the way, and laid them between the boats with a huge pile of food. Even though we were hungry, we could barely eat half of it.

Another couple of hours paddling brought us to the village where we were to spend the night. The people were from the Khamu tribe, who originally migrated north from Cambodia. The population is about 190, made up of just over 20 families. The tour company has a hut for tourists to stay in, and two families looked after us. Every family gets a turn at this so that everyone shares the income. The village is very poor, and they mostly eat sticky rice which grows on dry land rather than in paddy fields. They slash and burn the jungle, which provides just enough nutrients for a single crop, after which they must wait at least three years before repeating the cycle.

The Khamu are animists rather than Buddhist like most Laotians, and have their own language. A doctor visits about once a month, but most illnesses are treated by the village shaman,  who sacrifices an animal to appease any evil spirits. There is a small primary school with one teacher, but lessons are all taught in Lao. Although we saw lots of chickens, ducks, pigs and cows, the villagers rarely eat meat because they would rather sell their animals for cash at the market. Since the nearest road is about four hour’s walk away, this must be quite a mission.

When we sat down to dinner, our host produced a bottle of home made rice whisky which was so strong you could probably run a car on it. At first I shared a sip with Felicity,  but was informed that etiquette demands you swill down the entire portion in one gulp. I managed about half a dozen swigs without any ill effects. When we had finished eating, we sat around a camp fire until the wood was used up, then retired to our sleeping hut. It was lucky there were just the three of us, because even with several mattresses each our beds were pretty hard. It was only 8pm by this time, but with no electricity our entertainment options were limited.

By about 4am I had enough sleep, so I spent the next couple of hours impatiently waiting for dawn. I’ve never been so pleased to hear cocks crowing! I sat outside and read my book for a while, and watched three little boys run down to the river with nets. They returned about half an hour later with a couple of small fish each, presumably for breakfast. Apparently the river used to have lots of fish until the locals began using dynamite which kills everything in the vicinity. I also heard several gun shots in the hills in spite of the supposed protected status; wild meat of any description including monkey, bear, snakes and jungle cat is popular here.

Today’s trip was made a little more difficult by several village’s home made hydro electric dams which blocked the entire river, which meant we had to get out and haul the boats across. We could hear dynamos humming away, and saw bare copper wires fastened to bamboo poles leading to huts with thatched roofs and huge satellite dishes so the occupants could watch TV.

We stopped briefly to look at a second village about an hour’s walk from where we stayed. This time the people were from the Lantan tribe, who originally migrated south from China. They don’t like to marry with other tribes, and to my amateur eye seemed to have a too limited gene pool. The married women all shave off their eyebrows and wrap their legs in dirty bandages, which didn’t make them particularly attractive to my taste, which might have been the objective.

By early afternoon we reached the Namtha river, which was brown and murky. A road is being built along one bank, and the excavators are just dumping all the rock over the edge into the water. We ended our journey at one of the villages on the road and loaded our gear into a van.

For the first part of the drive home the road was not much more than a 4WD track, but after a while we came to a section where lots of heavy machinery was working to make it two lanes. We had to wait quite a while for an excavator to finish working so we could pass. A flash 4WD Toyota raced forward as soon as the machine was out of the way, but had to back up to let the traffic coming towards us though. Oun told us the occupants were Chinese who are “always angry”. As soon as the road was nearly clear they zoomed forward again with wheels spinning,  nearly going over the cliff in the process. I was glad we had a typically laid-back Lao driver!