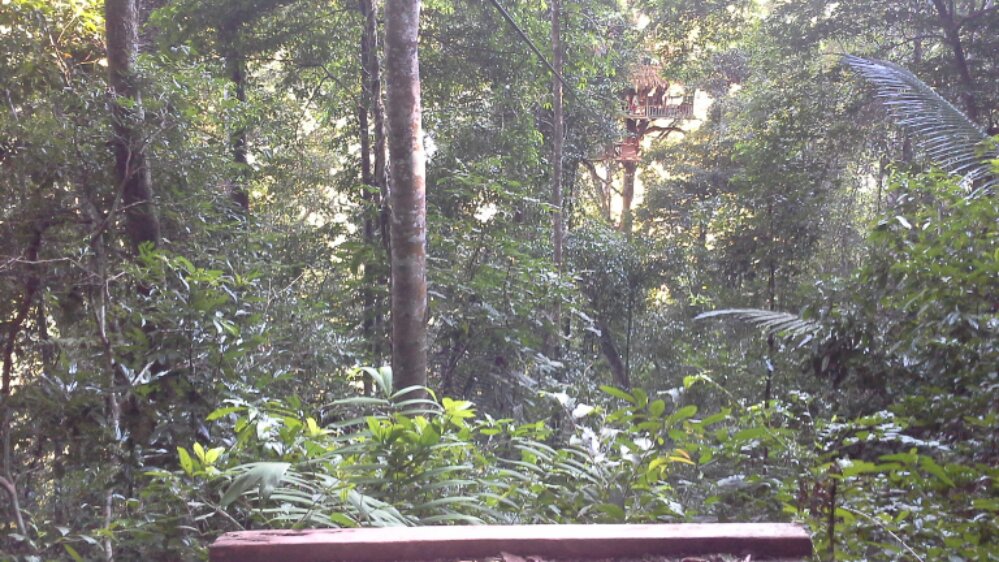 We have spent the last three days deep in the Lao rainforest searching for gibbons. Getting there was so much fun I don’t care that we didn’t  find any, especially as we have already seen them in Thailand.

We started with a couple of hours in the back of a truck, which was cold when we were zooming along the highway,  and very bumpy once we left the seal and headed into the hills on a very muddy 4WD track.

Eventually we arrived in a small village where we picked up harnesses, learned how to put them on properly, and paid close attention to how they clip onto the steel cables which are strung high across the jungle valleys.  Some of them are 600 metres long and more than 60 metres from the ground. At first it was pretty nerve-wracking but after surviving the first few runs it started to be exciting.

After each cable we would have to walk up a ridge for 10 to 20 minutes before the next ride. Sometimes we arrived at the platform at the end travelling quite fast and had to brake with a piece of old bicycle tyre attached to our pulleys,  but on some cables we had to pull ourselves up the last section hand-over-hand. Each section has a cable running each way with one starting a few metres above the one that you come back on.

At  about 3.30 we reached a huge tree house built 35 metres up a huge Kisi tree where we spent the first night. The guides gave us a snack, then left us to amuse ourselves until dinner, which meant most of us spent the time zipping over to the ground, following the track to the kitchen, then zipping back. On my final run back to the hut, I misjudged my speed slightly and ended up stopping by smacking my face into the doorway,  which has left a small scab on my cheek. It wasn’t bad enough to stop me enjoying myself immensely.

We weren’t allowed to use the lines at night, so I jumped in the (cold) shower as soon as dinner arrived at 6pm. This is a pretty fancy hut, with solar powered lights and bedding for all the 9 people in our group.

After breakfast we packed our gear and walked for a couple of hours to a second area of zip lines which lead to the hut in the photograph. We dumped some gear then continued on to a waterfall where we ate lunch and had a swim in the river. After returning to the hut, the guides knocked off and  left us to amuse ourselves, so I spent the next couple of hours happily zipping around a circuit of 3-4 km, about half of it by cable.

After dinner, we were sorting out our bedding when Judith spotted an animal in a nearby tree, which turned out to be a red panda! We also soon discovered that we were sharing our hut with a family of tree rats, who spent the night playing a messy game of cards not far from Judith’s head.

At the crack of dawn, a few of us decided to head out for a bit of zipping before breakfast. The rainforest is covered in mist until it burns off about 9am, so it was a bit freaky launching into the clouds with no view of the destination. Out in the centre of each valley the only thing I could see was about 10 metres of cable stretching out in front. We worked out the average speed on the cable was almost 50 kph, so the maximum speed in the centre must have been close to 70 kph!

As the water supply in the hut stopped overnight due to what the guides reckoned was a squirrel biting through the pipe, we zipped back to the waterfall for breakfast before beginning the 2 hour walk back to the road end. I was sad to hand over our harnesses at the end of a great adventure.

After another bumpy ride back to the highway,  the guides offered to take us on to Luang Namtha in the back of a small truck so that we could avoid having to stand in a bus. This section of road is built to just about NZ standard, which is not typical for Lao. We found out that it was made by the Chinese to transport goods to and from Thailand; a constant stream of shipping containers, fuel tankers and other heavy vehicles make up most of the traffic.

Judith is a bit crook tonight, so it is fortunate we are in a good town to have a rest day tomorrow. Felicity and I have just returned from the night market, where we shared a table with three French people to whom we did our best to promote NZ pinot noir while we ate a duck and papaya salad.