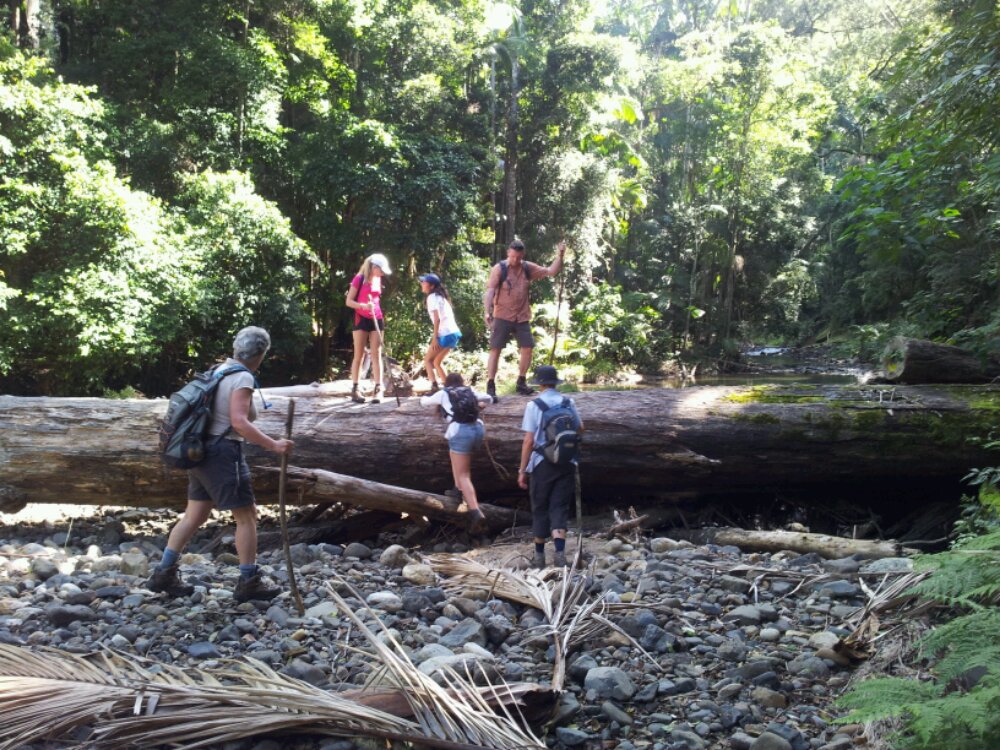 I knew I was in a different place as soon as I woke up this morning because of the loud Australian bird-calls from the golf course next to where we are staying on the Gold Coast. Felicity was so impressed by the change of temperature so she jumped into our friend’s pool before breakfast – if it had been big enough to do a few lengths I might have joined her.

We packed a lunch and plenty of water, then headed in a two car convoy to Binna Burra up in the hills behind Nerang. The first half of the 17km track was pretty straightforward, winding down into the Coomera River valley a few hundred metres below the road.

It didn’t take long before we all discovered we were under continual attack by hungry leeches. Luckily, they are the kind you can just pull off without any bits being left behind. The first couple I used twigs to scrape them away, but eventually I began to just grab them and pull. One managed to get inside my sock and have a good feed before I noticed, and when we arrived back at the car I discovered heaps of blood running from my leg where one had got inside the hem of my board shorts. They have a kind of anaesthetic, so at least you don’t feel anything.

A couple of kms down the track, Stefan our host stopped to point out a tree with large round leaves that he warned us not to touch. Not long after that, his wife Mieke managed to brush her arm against a leaf, and was rewarded with considerable pain and blisters. The recommended treatment is to stick duct tape on the affected area, then pull it off, hopefully taking the tiny stinging hairs with it. Fortunately for her, another group of walkers travelling in the opposite direction  to us were prepared for exactly this scenario, so the rest of her day was not a bad as it might have been.

We also encountered the Australian version of bush lawyer, which to nobody’s surprised turned out to be even nastier than the NZ version. I was hoping to see some animals, but being at the back of the group I missed seeing a black snake and a couple of pademelon wallabies.

Despite all the hazards, we enjoyed a great walk. The return trip involved 12 river crossings, but wet boots were the only downside, if you don’t count a couple of hunts for the track.

Near the end, we detoured to the Gwongoorool Pool for a swim. There were signs warning that eels would bite if they felt threatened, but luckily we didn’t see any, so I am still in one piece.