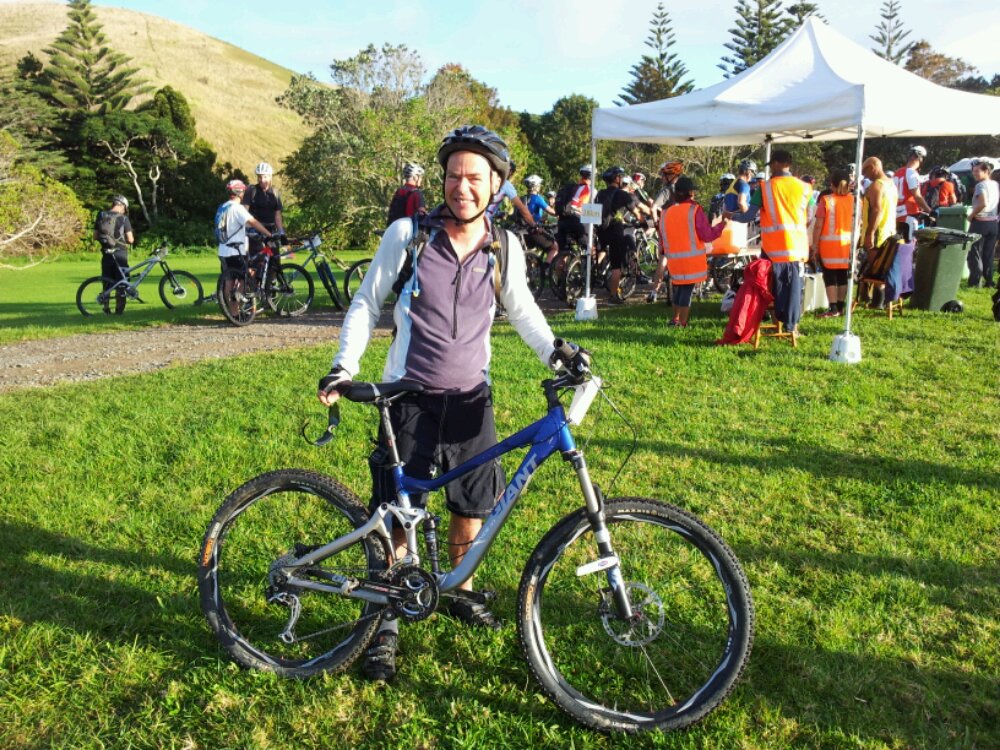 On Saturday morning, Felicity and I  woke at 5am and headed to Devonport so I could catch the 6.30 ferry. A couple of hours later I was re-united with my bike and waiting for the start of the 50Km race.

Felicity had to catch a later boat because her half-marathon didn’t start until later in the morning, so she got to have a second breakfast in a cafe.

From past years, I knew that the first long hill out of Home Bay would be a congested mass of testosterone-fuelled young men, and as getting in front wasn’t an option for me I decided to start right at the back and wait for the traffic to die down. The photo was taken about a minute before the starting  horn, and by the time I got my camera back in my pack I was a good 100 metres behind the end of the pack.

I trundled up the hill at a leisurely pace, and enjoyed a clear trail right until I hit the top. By then I had caught the unfit and/or inexperienced riders so I switched to race pace and enjoyed overtaking everyone in sight. By the time we crossed the causeway to Rangitoto and started the long climb to the summit I was going great guns, and starting to catch riders at a similar level to me. Over and over again I would come up behind someone, wait a minute to catch  my breath, then pull out suddenly and accelerate away.

Speeding down the hill on the other side, I got re-passed  a couple of times by riders with more skill or less sense of self-preservation. The scoria road is pretty rough, with lots of loose sections where it’s easy to skid. The consequences of coming off my bike would have been about as bad as it could get, so I  was a bit cautious.

I was mostly on my own riding around the flat section of road past the lighthouse; and I was enjoying the unique volcanic environment so much  I decided to stop for a break. After a snack and a drink I returned to the race, and began re-passing some of the slower riders that had jumped in front of me again.

Then a bike shot past me at incredible speed, before I had even noticed someone was behind me. A few seconds later another rider flashed by, and when I saw his $15,000+ carbon-fibre bike I realised that the elite 30Km racers – who had started half an hour after me, had caught up.

Back on Motutapu, the shorter course headed straight for the finish line, whereas I still had 20Km to go. I finished in just over 4 hours, pretty close to my previous efforts. The last few steep hills had me off the bike pushing, but all the other riders were by that stage as well.

When I crossed the finish line, I won a spot prize of some hi-tech toe warmers ?? Someone thrust a bottle of cold apple cider into my hand and I chugged it down. On an empty stomach and with very low blood-sugar, this made me feel rather woozy, but after scarfing down a chicken kebab  I felt a lot better.

Until I casually bounded down a low bank only to remember when it was much too late that my leg muscles weren’t up to bounding, and I fell flat on my face. So now I have a sore hand and a grazed knee, after all my care in not falling in the race!

While I was waiting for Felicity to finish her race, I had a swim and erected our tent. She turned up a bit earlier than I expected, and in pretty good shape. Her decision to wear boots rather than running shoes paid off on the rough scoria.

We sat around for a while watching the rest of the marathon runners – and a few slow bikers –  then it was time for Don McGlashin. By this time the weather was looking increasingly grey, so most people chose to go home on the earlier ferries. This meant there were only about a hundred of us listening to him, which was fantastic. Because he was late arriving, the support act had to go second, which worked out rather well. Kerry and what’s-his-name are only a covers band, but she had good energy. By now it was starting to drizzle and get cold, but after sharing half a bottle of wine with our hamburger dinner, I was actually convinced to dance with my wife, which was rather fun. Apart from three other women and two Pacific Island security guards dancing, the audience had shrunk to a dozen or so guys drinking beer in one of the big tents.

After the music, we sat around near the beer-drinkers for a while, but when it got too dark to read we decided to hit the therm-o-rest. It rained steadily all night, only a small amount ending up in the tent; the worst thing about it was having to go out for a pee after lying awake for a couple of hours hoping it would ease off.

It was still wet when we woke up, so we took our breakfast over to one of the big tents and talked to a German scientist who studies milk from mice and rats.

I had wondered if I might sneak off for an illegal bike ride this morning, but my legs didn’t feel at all like pushing pedals. We  hung around the event base reading, and watching the clean-up crews packing stuff away. The sun had come out again by this time, so it was a very pleasant wait for the midday ferry. The last photo is of the Home Bay site, with Felicity reading in the beer tent.

The sun obligingly stayed shining all afternoon, so all our damp gear is now dry and mostly packed away. What a fun weekend, just what I needed after one of the most stressful weeks I’ve had in years.

One thought on “Dual on Motutapu”